Romila Thapar’s account of a 1957 journey to ancient Buddhist sites in China, across swathes of Silk Route territory and modern cities, comprises both visitor’s gaze and historian’s introspection. The result is time travel with a continually shifting lens. 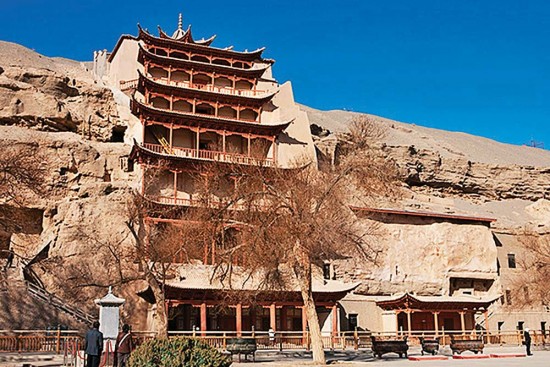 A historian finds a box of old papers at home. She rummages through it and finds a diary she wrote some 64 years ago during a three-month visit to China in 1957. A diary she wrote to entertain herself and her friends, about people and places. “Reading the diary was a way of recalling a historical moment as I experienced it,” she says, and it is indeed an apt metaphor for Romila Thapar’s work as a historian.

The journey began when Thapar had the unbelievable opp­ortunity to accompany Anil de Silva, the Sri Lankan art historian, as a research assistant to two major Buddhist sites in China—Maijishan and Dunhuang. A map in the book shows this journey spanning the major urban centres of Beijing, Nanjing, Shanghai, Guangdong; smaller historically significant cities of Louyang, Banpo, Xian, Lanzhou, and a number of villages in diverse forms of transports—plane, train, automobiles of various vintages and the inevitable ferry to and from Nanjing. There is an Introduction (added before the manuscript went to press) which can be read before or after going through the diary. It provides the historical context of the Silk Road and the trade routes that criss-crossed Asia, which nurtured and contributed to the evolution of Maijishan and Dunhuang in many ways. I visited both. It helped me commence the diary, fortified with the significance of “historical depth”, while the re-reading afterwards helped me absorb the connections in fuller measure as I mentally traversed the vast geographical expanses and the multiple routes, which “cut a swathe of exchange relations across Eurasia, establishing innumerable links”. The poignancy of the contemporary nation-state’s obsession with fixed, demarcated boundaries, bringing the connections to a virtual halt, becomes greater.

It would be much too glib to read this diary merely as a descriptive account of Thapar’s first visit to China. The ‘gaze’ is as much about a literal ‘look’ at the other, as a philosophical awareness of the ‘self’—and Thapar’s gaze constantly shifts to interrogate her own ideas, thoughts and values. As she puts it, during the journey, “I [am] intellectually beg­inning to wake up”.  It is a journey which shows how we become what we are because of who we were. At another level, to practise the gaze is to enter into a personal relationship with the person/object being looked at. Thapar’s ‘gaze’, sometime sharply focussed and at times taking wide expanses in its sweep, reflects a continuously shifting lens—and the dialectical interplay is fascinating. Besides, she equally was the one being gazed at. Furthermore, both Thapar and China of the 1950s shared the position of being at the receiving end of the ‘post-colonial gaze’.

Thapar’s diary provides the historical context of the Silk Road and the trade routes across Asia, which contributed to the evolution of Maijishan and Dunhuang.

I read this account not as a historian but as a student and teacher of China on time travel, with Thapar as a guide. The ‘gaze’ inspired me to use a cinematic analogical framework to art­iculate how I have absorbed the diary and locate the themes which run therein.

There is the long shot, giving “a distinct sensation of what Thapar has described as the sweep of past centuries”. This is about the historical and civilisational perspective on the transmission of Buddhism from India to China, the trajectory of its growth in China, the similarities in sculptural styles and the wider Asian connections and transmissions. These come across in all the passages which deal with the “job” she had gone to do--in the musings in her historian’s mind as she meticulously explores the arc­haeological sites, the caves and the paintings. Particularly thought-provoking are the refl­ections pertaining to the ecosystem—how history is (ought to be) understood; lack of research centres, libraries, access to up-to-date publications and journals; absence of access to sources of other areas—and always in a comparative context. Above all, a crucial question of continuing relevance: Do the Chinese have a “stronger sense of history than those of other early cultures?”

Then there are montages in mid-shot, spread across the book, which throw up a complex picture of a country in the aftermath of a revolution. Here is rich material which a student of China can juxtapose against the numerous Western writings on Maoist China and contest the invariable tendency to oversimplify or essentialise. Themes range from the ubiquitous Soviet presence and the fraternal bonhomie, to the rural and urban dyn­amic of the time, the new “socialist work-ethic”, the freedom and confidence of the women, ideological debates in the cultural and historical realms; human interest stories, descriptions of the people, marketplaces and factories, and the remnants of colonial legacies (Bach’s music was still was playing on the Shanghai-Beijing train). The descriptions are enchanting—highly visual—with a sharp eye for detail, effortlessly conveying the enjoyment of her experiences. There are accounts of the streams of delegations in China, reflecting the desire to connect with the world, and in the backdrop, always, the nati­onal developmental project with all its vehement stress on scientific and technological modernisation. Thapar observes that the “fury of the rectification campaign had abated”, in the three months that she was there, but there is strangely no reference to the slogans and the mass mobilisation which would launch Mao’s tragic Great Leap Forward campaign that we now know had begun in full swing at that time. There are also montages aplenty, of China-India comparisons; enabling a perspective on how “formerly colonised societies overcome (or do not) socially constructed barriers that prohibit them from expressing their true cultural, social, economic and political rights”. As she presciently says, “[T]he emphasis on building something new and worthwhile is unmistakable”, but “[W]ill it last? I have to return after 20 years and see.”  Perusing and pondering over all this in 2021, there is a sense of enormity of the distance China has travelled since the late 1950s. And in that gazing of six decades ago, there are also some uncannily accurate projections of the dilemmas and contradictions today, specifically between India and China; and how easily dreams can turn into nightmares, as happened with the Russian Revolution.

There is no reference to the slogans and mass mobilisation that launched Mao’s tragic Great Leap Forward that we now know had begun in full swing at that time.

Finally, the close ups, which turn the gaze on the self. Thapar leaps out of these pages in all her youthful ardour and from the diary emerges a portrait of the eminent historian as a young woman, whose “mouth waters” at archaeological digs, her sense of fun (playing table tennis with the monks, learning to play the erhu); her quirks (consulting a traditional Chinese medicine doctor for her pimples) and, at times, petulances. My two favourite sketches? Thapar being measured by a Chinese tailor; and her account of her impatience with the official restrictions on moving freely in public places. We get a glimpse of the thought processes, and the self-scrutinisation that would lead to the emergence of one of the most acclaimed and formidable historians of ancient India. One wishes there had been entries with dates—it’s the kind of seasoning that goes with diaries--but that’s a minor quibble. Thapar herself gives the perfect epitaph for a travelogue: “This extraordinary journey is coming to an end just when I am beginning to feel that I am getting some inkling of the place.”

But then, that’s precisely when a new journey begins.