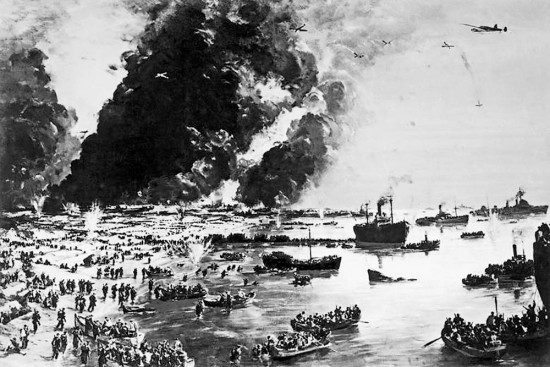 Throughout the first few freezing weeks of 1940, the various units of Force K6 were dispersed around the country (France) and found their feet. By the end of January, Hills was able to report that, despite the severe climate conditions, “the Force is comfortably housed and fit”. The 29th Company were the first to leave Marseilles, going by train to Le Mans, home of the famous twenty-four-hour car race, then a staging post between the BEF and their supply ports on the west coast. They quickly settled into their routine of training and exercising, but the local British commanders were unable to find enough work for them. On 20 January Major Shannon recorded the lowest temperature experienced by K6 men that winter, minus seventeen degrees Celsius, but that did not prevent the men celebrating Eid Al-Adha, the Muslim festival that commemorates Abraham’s willingness to sacrifice his son to God. Life continued despite the extreme cold.

The 32nd Company departed from Marseilles a few days after 29th Company, and joined the British First Corps near the Belgian border at Orchies, an area that had been occupied by the Germans for much of the First World War. They were ‘employed to capacity’ there, working with the Royal Engineers constructing def­ences. Among their number was Lance Naik Chaudry Wali Mohammad, from Mohra Vaince village near Rawalpindi, a physical training (PT) instructor and hockey player whose son now runs a taxi company in Woking. On February 1, the company were visited by the BBC. Richard Dimbleby and Z.A. Bokhari--who later founded Pakistan Radio--recorded them telling stories and singing songs, and a camera recor­ded that process (as well as the cooks preparing dinner) on film. Unlike some of their French comrades, mule drivers had little time for leisure pursuits at this early stage. A cartoon in the Echo du Nord shows two French soldiers in their dormitory. One smokes a pipe while he knits, and says to his comrade, “I’m making a pullover for my wife. She has no time, she’s too busy making shells!”

The 25th Company, meanwhile, were attached to Second Corps near the large city of Lille, known as the ‘Manchester of France’ because of its textile industry. After a journey where the train carriages were like “ice chests and their tops were covered with an inch or more snow”, they reached St André station on January 6 and marched three miles to their base at Marquette-lez-Lille. On January 20, they had a visit from a gas expert. The men had been trained in the use of gas masks during the long sea voyage, but this expert brought masks for the mules and spent several days fitting them on the animals. Their commanding officer, Major Wainwright, drew a map which shows their situation on a bend in the river Marque, around the farm of Monsieur Dillies, who had been an artillery officer in the Great War and was now the mayor.

The men of K6 were becoming poster boys in the BEF. On January 15, the Duke of Gloucester (the King’s brother and a senior liaison officer) visited both companies.

Major Akbar wrote that the men were very pleased to be stationed at the farm, and that they were able to convert part of a brickworks for use as a mosque. Akbar himself was billeted with the mayor and his wife, although they had difficulty finding a bed that was long enough for his six-foot frame, so one of the company carpenters was called upon to add some extra planks. When they first met, Madame Dillies asked Akbar if he had any children. He said that he had seven. She asked him how many wives he had and was surprised when he told her that he had only one, Kudsia. With little dir­ect experience of Muslims, Europeans would fall back on clichés and what they had seen on films and read in books. In a similar way, an article in the local paper Echo du Nord describes a VCO with a long moustache, melancholy eyes and skin with a “tint of liquorice”.

The 22nd Company, with Captain Anis and Driver Muhabbat Shah among them, were the last to leave the south of France, staying until the start of May. They were kept very busy, chalking up 800 carts used during the month of January. The Reinforcement Unit and the 47 SDS also stayed at Marseilles for the moment, while the Advanced Remount Depot moved up to Le Mans with 29th Company. With the companies dispersed over such a wide area—600 miles from Marseilles to Lille—the units with a central res­ponsibility faced considerable logistical challenges. Their own Indian General Hospital found their designated site at Caserne Quesne in Dieppe small and ill-equipped. They managed to open on January 11 with eighteen beds, but “that the situation was satisfactory no one but a crass opt­imist could believe”. The headquarters was stationed in the north, near where the action was expected to develop, and Ashraf and Hills were very busy driving from one camp to another, trying to maintain an overview, making improvements and keeping an eye on morale. This zooming around had its inevitable consequence on February 17 when the van carrying Ashraf slid into a field in bad weather. Both Ashraf and the British driver were badly shaken but otherwise unh­urt, and Hills rem­arked that the concerned response by the British drivers showed the “esteem in which the Risaldar Major is held by British troops”. The bewhiskered VCO was winning friends and respect all round.

The men of K6 were becoming poster boys in the BEF. With one eye on public opinion and the other on the history books, Hills was happy with the media coverage. The 25th and 32nd Companies hosted visits from many VIPs over their first few weeks in the north. On January 15, the Duke of Gloucester (the King’s brother and a senior liaison officer with the BEF) visited both companies, “much to the del­ight of Indian troops”, and promised that the King’s Christmas card would be issued to the men. On February 15 at Wambrechies, with snow falling, a film crew and two photographers acco­mpanied Major Akbar as he conducted Lord Gort, the BEF commander, around the 25th Company positions, introducing them to a loaded pack mule with a gas mask, which brought a smile to his face. This was not Gort’s first visit. A few weeks before he had written to India of the force’s ‘first-rate quality’, saying:

The four mule transport companies that you have sent us are quite excellent and, in the short time that they have been here, have created a very good impression on all sides. In discipline and military efficiency they leave nothing to be desired; they have settled down at once to their new conditions without any fuss; and their soldierly qualities are commented upon by all who come in contact with them.

The twin aims of valuable work and high profile were being fulfilled.

The men’s experience of France would have been much harder without their agents de liaison. On January 3, each company was joined by a French soldier who was attached to them until they left the country months later. The agents’ job was to interpret language and customs, to ease egos and cut through red tape. They were fluent in French and English, and at least one of them gave French lessons to some of the men in his company and may have picked up some Urdu too. These agents were an essential corner in the triangular interaction between Britain, France and India. The writer André Maurois had done such a job in the Great War and wrote about how dep­e­n­dent a British officer became on ‘his French­man’. The most senior was Sous-lieu­tenant François de Champeaux, the son of a French count and an American heiress. He stayed with the K6 HQ until they left France in June, and later in the war he became a member of the Resis­tance and worked with the American XV Corps after D-Day. He was just one among many luminaries whose paths crossed with the boys of K6.