Jyotirmaya Sharma’s book takes a long, hard look at the miscibility of religion and politics in Gandhi’s thoughts. 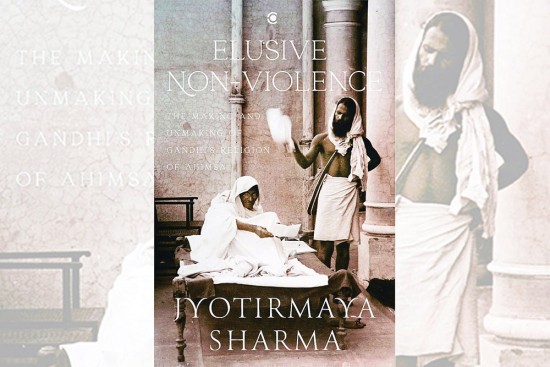 One of the achievements of social scientists over the last century has been the levelling of the hierarchical distinction between modern and pre-modern societies. While in the public imagination this dis­­tinction dominates, in the soc­ial sciences it has become, if not defunct, at least uninteresting. This is why, for example, a social scientist would consider even the Taliban in Afghanistan to be a wholly modern phenomenon.

Claiming that all societies are modern is wholly uninformative if it is not followed by a consideration of the concept of the new. The new is not the modern, des­pite their continuous confusion with each other. The new is also not opposed to the old. Often, what is new is but the repetition of the ancient. This is what comes through in Jyotirmaya Sharma’s Elusive Non-Violence: The Making and Unmaking of Gandhi’s Religion of Ahimsa, which is an attempt to read M.K. Gandhi as the creator of something absolutely new—the concept of ahimsa. The question around which the book revolves is: what exactly is new in Gandhi’s concept of ahimsa?

Sharma is perhaps one of India’s foremost intellectual historians of Hindutva. His turn to the thought of Gandhi must be seen as the concluding move in a survey of the restatement of Hinduism. Yet Gandhi, despite the superficial similarity of his attempt to restate Hinduism, is unique in his theoretical practice as the creator of a new language: political asceticism. It is this conjunction of mass politics with asceticism that makes Gandhi’s thought unique. The conceptual thread that ties the two together, however, is nothing other than ahimsa or non-violence.

Gandhi’s positions on political, religious, social matters can be seen to be grounded in his commitment to ahimsa as the means to moksha.

Sharma is careful to point out that ahimsa has a long history, yet only with Gandhi does it become a political concept. For Sharma, Gandhi’s politics are circumscribed by his religion. Yet, he points out that Gandhi did not passively inherit tradition but actively rewrote it—creator of a unique form of Hinduism, where all of its components were chosen in relation to their affinity to the central concept of ahimsa. For this reason, Sharma argues that Gandhi’s involvement in the Indian freedom movement was not underwritten by some commitment to a European concept of freedom. For Gandhi, freedom meant nothing other than moksha—freedom from the cosmic error that is the body. Western civilisation, with its attachment to the body was against it. For this, British rule had to be opposed. Yet, this opposition had to be non-violent, for otherwise one would risk becoming what one opp­osed and the realisation of moksha would be forsaken.

According to Sharma, Gandhi’s language of political asceticism is founded on the relation of ahimsa to unattached action and duty. Even violence, if done from a sense of duty, was non-violence. This laid the foundation for Gandhi’s insistence on the importance of varnashrama, as the ideal society where everyone did their duty. For Sharma, it is not enough to state that Gandhi brought religion into politics. The utter miscibility of religion and politics in Gandhi’s thought is a consequence of their common root in ahimsa. The superficial appearance of inconsistency in Gandhi’s thought is underwritten, therefore, by a frightening consistency. All his public positions on political, religious, or social questions can be seen to be grounded in his commitment to ahimsa as the means to moksha.

Most surprisingly, Gandhi’s political asc­eticism makes a virtue of extinction, death and annihilation. His entire thought is the creation of a new concept of ahimsa whose content looks forward to the universal ann­ihilation of the body. It is something radically new which militates against all novelty as nothing but a vast cosmic error that must be corrected. It is the monumentality of this contradiction which is the reason why Gandhi makes all but the most thoughtless of us uneasy. Sharma unveils this contradiction in its naked brutality. The merit of Sharma’s book lies in how it renders unrecognisable both what Gandhi did and what he said.

(This appeared in the print edition as "Correcting Cosmic Error")