An exclusive extract from Kajri Jain’s book, ‘Gods In The Time Of Democracy’ 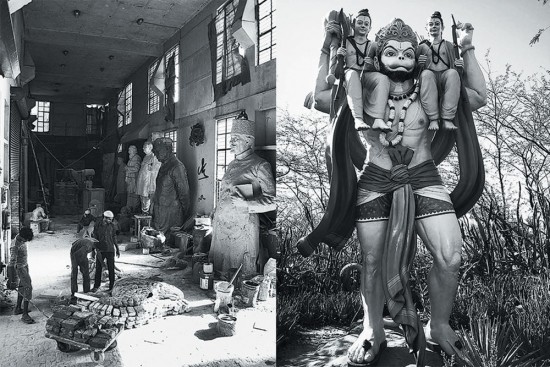 Prime Minister Modi’s Statue of Unity, a 597-ft. tall statue of Sardar Vallabhbhai Patel on an island in the Narmada River overlooking the controversial Sardar Sarovar megadam, is the secular apotheosis of the assemblage of icons and developmental infrastructures described in the previous chapter. If, for Nehru, dams alone sufficed to embody theologico-political power, the Statue of Unity revitalises the use of figurative public sculpture to perform the “magic of the state”. This magic, like that of religious icons, is woven and maintained through spectacular ceremonial rituals such as inaugurations and annual celebrations. But it is also simultaneously dispelled and reanimated through dramatic desecrations, such as the famous toppling of the Vendôme column and statues of Stalin, Lenin, and Saddam Hussein. As with the state’s symbolic uses of infrastructure, the use of statues and monuments is not confined to imperial, totalitarian, autocratic, or non–First World regimes. Indeed, one of the most intense periods of state statue building—its critics called it “statuomania”—was from 1900 to 1918, when about two hundred monuments were raised in Third Republic Paris, with its political scandals and debates over the nature and formation of the polity. There, as in the present account of monumental statues in India, political, social, and symbolic upheavals manifested themselves as claims over public space and visibility. Statues and monuments are not characteristic features of any particular type of regime, but are revitalised at times of intensified political competition and change. This chapter traces some of the trans­formations in the basis of power that crystallise in the monumental statue form in post-liberalisation India.

Republican statuomania in Paris followed soon after the French construction of the Statue of Liberty (Liberty Enlightening the World, dedicated in 1886) as an explicitly global icon of freedom and democracy. The statue was quickly adopted as a more specific icon of the United States and its particular modality of inclusion, as encapsulated in Emma Lazarus’s fundraising poem The New Colossus (1883). Here, Leviathan returned as the fantasy of a unified democratic body politic—a monster that attempted to unite and embody the Old World and the New World, France and the United States, in their joint venture of Enlightenment. It reared up to show its singular might in the face of difference as, in the heyday of colonialism, foreign objects and the spectacle of the other crowded into the new spaces of the World Fair and the department store; as suffragists protested the exclusion of women from the statue’s opening ceremonies; and as people of color expressed disgust at the absence of liberty and protection for those within the nation’s own borders. The Statue of Unity refers to this Ur-figure, both in its name (which also invokes Sardar Patel’s role in incorporating the princely states into the Indian nation) and in the way its height is constantly described as twice that of the Statue of Liberty. And like Joseph Pulitzer’s crowdfunding cam­paign for the Statue of Liberty’s pedestal or the Ram Shila Pujan campaign in 1989 to collect bricks for the Ramjanmabhoomi temple in Ayodhya, the Bharatiya Janata Party (BJP) election campaign in 2014 ran a “Statue of Unity Movement” that asked villagers to donate iron implements to melt down and use in the statue. These performances of participation in the very body of the statue attempt to constitute the public as a public: a body politic actualised in the statue. How might we think about the relatio­nships among statues, democracy, and publics as they appear in early twenty-first-century India, and the resonances of these relationships with other figures and histories? 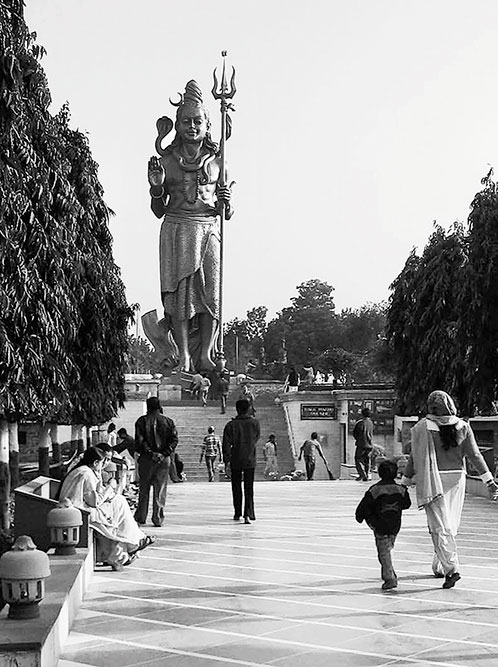 In July 2008, the newsmagazine Outlook published a story billed on its cover as “Statue Mania in India.” In it the historian Ramchandra Guha is cited as dismissing statue and memorial building as “the old bread and circuses game that parties are playing to deflect attention from real issues by stoking regional or caste pride”. But the story concluded that political parties were “fooling themselves” in treating statues as the “new opium of the masses,” citing an Uttar Pradesh villager who made a similar distinction to Guha between statue building and the “real issues” of “the basic needs of millions of poor people,” such as roads, food, and water. The story uses critique’s familiar trope of cultural dupes. Political parties treat villagers as dupes, but the parties are themselves dupes for doing so; meanwhile, the intelligentsia can see exactly what is going on, for the template is the same from the Colosseum to Kailash Dham. The Outlook story was part of an intensification of media commentary on political statue-building projects in response to the monuments to Dalit leaders being erected by Kumari Mayawati, then chief minister of Uttar Pradesh. These commentaries largely unfold as a drama of “real” material issues against symbolic decoys and of enlightened reason in the service of the public good against the dark forces of power, corruption, self-interest, particularism, and megalomania. Questions of recognition are dismissed as cynical identity politics, because it is taken for granted that, for “millions of poor people,” recognition and status are not “needs” like food and water and, more to the point, these are separate—and separable—issues. Critical responses to the Statue of Unity were far less personalised and vituperative but similarly entailed unmasking the ideological deception of the superstructure in the name of an ultimately economic base. 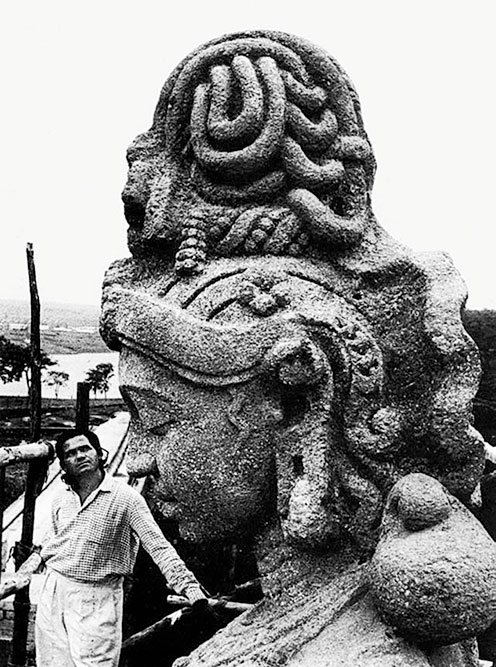 Such analyses are often conducted in the name of materialism. However, their methods depend primarily on projecting cynical intent, bad faith, faulty reason, dysfunctional psyches, moral evil, and regressive ideology onto other human actors (politicians, the public) rather than actually attending to the material registers (technological, formal, generic) in which politics also unfolds—that is, its aesthetics. So no matter what statues or monuments look like or what they do, their materiality is ultimately reduced to the abstraction of the money spent on them and the failure to create more acceptable— “useful”—types of infrastructure instead. But the thing about things is that they cannot be fully contained by or reduced to the ideological structures or abstractions that are actualised in them at particular moments, as useful as ideological analyses can be. If things exist in assemblage and are constantly in process, the potential for emergence coursing through them might make any of them—and hence the ideological structures they actualise—otherwise I want to explore how we might think more capaciously of statues as things of politics. Here the political is not only what Bruno Latour charac­terizes as the unified, homogenised, representable, trying-to-be-organic, monstrous “Body Politik” of the state (most obviously embodied in the Statue of Liberty and the Statue of Unity, although again even these are not reducible to that) but also what he calls “Dingpolitik,” the dissensual, public, often literally outdoor modality of politics that refuses organic representation, that cannot be contained within the dome of the Parliament and the body politic. Think here of the 2011 Occupy movement puppets or the 1989 foam-and-papier-mâché Goddess of Democracy at Tiananmen Square, which referenced both the Statue of Liberty and the Soviet sculptor Vera Mukhina’s Worker and Kolkhoz Woman (1937). As things, statues are active in, and activate, distributions and redistributions of the sensible, where the sensible—that which is understood through the senses—speaks to the material nature of signifying processes: to the actualisations of meanings in practices, and vice versa. In short, the sensible refuses the separation of the “symbolic” and the “material.” 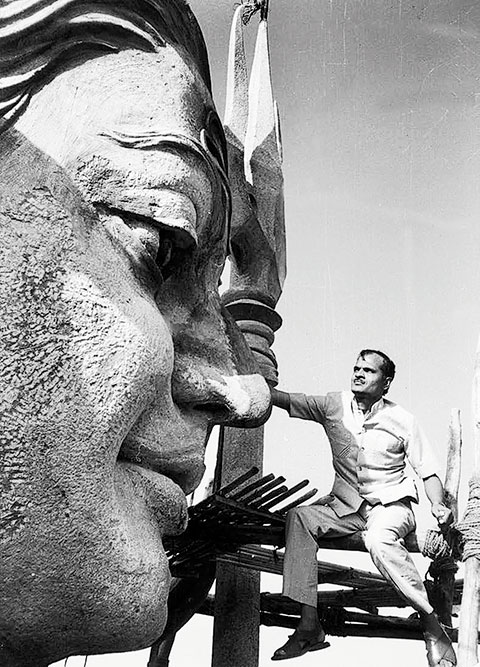 It is therefore a simultaneously more expansive and more literal materialism that I want to bring to the question of how the “statue wars” became such a prominent feature of the early twenty-first-century Indian political landscape. I focus in this chapter not so much on the size, expense, and visibility of statues as spectacles as on their occupation of space—specifically, the outdoor location that enabled their monumentality in the first place. The previous chapter described various routes by which icons emerged from temples into public view, often unmediated by priests, but how did this become not just acceptable but generic? Controlling access to sacred icons and texts is a key element of Brahminical power, and controlling access to space has been entrenched in the aesthetics of social distinction in general, particularly when it comes to women and Dalits. Such a radical addition to the possible forms of iconopraxis must surely index a deep symbolic upheaval, an adjustment in the vocabularies, mechanics, and sensorium of social power: the distribution of the sensible. What is the nature of this upheaval? How does emergence arise, and what does it do to the systems that produce it?

Approaching these questions via the monumental statue genre as an assemblage of processes of varying durations, I begin with two earlier moments in their emergence. Here I link these moments, described in the previous chapter as key to the techno-figural genealogy of monumental statues, to a particular configuration of the political public. The first is the late nineteenth century expansion into public space of the community festivals of Durga Puja and Ganapati Utsav, and the second, the emergence of an innovative public temple form in the 1930s. Both explicitly deployed the term sārvajanik (public, pertaining to everyone), elaborated later. At both these moments, remediations of iconography and new vocabularies of iconopraxis were central to claims on democratic representation and anticolonial mobilisation. It was the very novelty of these vocabularies and techniques that lent them to the aesthetic imperatives of electoral democracy, particularly the enumerative and commensurative terms of a diverse political field riven by multiple identity claims; conversely, the emergent forms of iconopraxis took up these idioms of enumeration and commensuration. A central driver of emergence in these processes has been mimesis, as what Michael Taussig, working with the ideas of Walter Benjamin and Theodor Adorno, calls “the nature that culture uses to create second nature,” a fundamental faculty of imitation that enables the enfolding of ideology into embodied habit, but whose ludic potentials can also open onto ways of being otherwise.

(This appeared in the print edition as "Statue Mania")