Bring Out The Brushes: Tug Of War Over A Tin Of Tar

Mumbai—under siege from the Shiv Sena’s puerile jingoism—is no longer a cosmopolitan safe haven. The BJP-Sena spat over recent events is only a new eyesore. 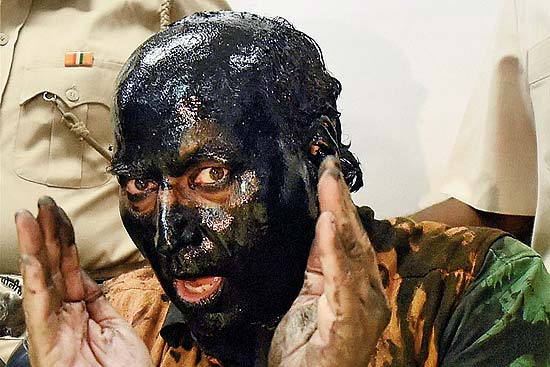 If Saadat Hasan Manto, the master of the short story and the only true minstrel of Mumbai, were alive today, he would have never managed a public storytelling session for Mumbaikars. Nor would he have managed to put up a retrospective of films of his old friends, stars and colleagues. Not because the fire and fever of Manto’s stories have died 68 years after Partition, but because Manto’s Bombay has long given way to Shiv Sena’s Mumbai. Also, Manto would be a Pakistani in the eyes of the Sena’s sainiks bristling with nationalism. His Indian roots would have little meaning in today’s circus of jingoism.

Last week, even as urbs prima in Indus quietly celebrated the 19th anniversary of its rechristening to Mumbai from its earlier British identity, no one was left in any doubt about its new personality—India’s most cosmopolitan city shackled by the competitive parochialism, communalism and majoritarianism of the BJP and the Shiv Sena. A ban on beef, followed by a blanket ban on sale of meat. A cancelled ghazal concert of a Pakistani artiste. Black paint on the face of an organiser hosting the launch of a book by a Pakistani. Thankfully, a brief respite from the all-round bad news came from the Supreme Court, which overturned a stay on dance bars.