In Outlook this week, a journalist's diary from Chennai. 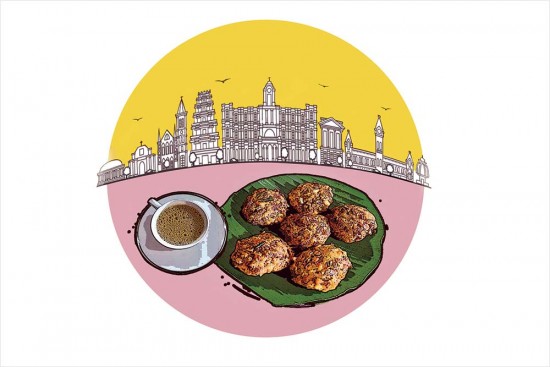 Food is uppermost on my mind whenever I go to Mad­ras—as I still call Chennai because Madras is the emo­tion I’ve known since 1969 when I first set sight on India’s “intellectual capital”, as Nehru called it. And, Madras never disappoints the food-loving Madrasi, often cal­led Sappatturaman by older folks who cannot bear to see hearty eaters. There’s always something new to tickle the taste buds.

On this visit, I discovered vazhaipoo vadai—banana blossom vadai. It’s the tastiest vadai I’ve ever had and I had it daily during my recent 10-day stay in Valasaravakkam, Chennai. Soft inside, the outer layer is a crisp brown crust. It is the King of Vadais on Chennai’s snack scene. The other vadais—medhu, thavalai, keerai, cabbage, parippu, thattu, Maddur—are very much there, but not on top of anyone’s list. The vanilla medhu vadai is standard companion of idli and pongal at breakfast in most eateries in Madras. But it is as an even­ing indulgence, especially in the roadside tea kadai (shop), which thrives across the city, that the vadai occupies pride of place. Madrasis love their vadais, which come in a variety of flavours, shapes and sizes. Until vazhaipoo vadai crashed the scene, the teashops’ evening fare usually was medhu vadai, parippu vadai, Mysore bonda and vaz­hakkai bajji (raw banana fritters) with samosa added on at a few outlets.