The Inheritance Of Loss

The other day, I had an unusual request, that too, from a student. One of her ­favourite teachers had left the school, leaving her in deep, inconsolable grief. “I’m not alone. Some of my friends too feel this way. I wonder if we could talk about our grief with you.”

“How long had you known her?” I asked.

“She had started taking our classes after the Covid pandemic began. We only knew her by her voice. We saw her on screen and looked forward to meeting her in ­person at least once before the year was over, but it was not to be.”

“So would the grief have been the same if she had taught you in person in class, or with other teachers?” After a moment’s ­reflection, they replied, “It’s funny you ask this. We often wonder sitting in the digital classroom how it would have been if we were in a physical space with her.”

“So what is it that you miss about her?”

“The realisation of how it could have been had we been able to meet her in person, and that it will never be,” came the reply.

As I listened to the students, a poignant narrative emerged. They were all missing the physical space, the engagement they had with their teachers. They were creating a fantasy world where their teachers were once again there for them, and interacting with them like they did before.

Would the joy of ­bunking, getting ­distracted, be less once the pandemic fades away?

“I visualise classrooms that I never went to and would never go to now. I imagine ­sitting there when I am in the digital class, the smell of the tiffin boxes, the touch of notebooks and bags of students, the daily sights and sounds that I came across. So you understand why we miss her so much? Because, by reaching out to us all, she tried to recreate the classroom atmosphere. She tried to give us what we were missing, and we tried to fill in the gap from our side. Even the backbenchers, who would bunk classes at the drop of a hat, say they miss this too much, and they would never bunk classes even if they had the chance now.”

Their plight reminded me of a story I had read, set in France in the backdrop of the Franco-Prussian War. A village school teacher could never manage to control his students who showed little interest in learning French. He wasn’t an exceptional teacher, but loved his subject and tried to make his classes interesting. But his ­students were not impressed. Then one day, the Germans took over and forbade the teaching of French, saying only German would be taught. So it was going to be his last class. What should he teach, he ­wondered? Should he finish the scheduled lesson? Anyway, the students might not even come for the class. Even if they did, they would be making noise, maybe even more that day, he thought. With a heavy heart, he decided to quickly finish the lesson and say goodbye. But what he saw changed him forever. Every student was present, ­sitting in class waiting for him. On an ­impulse, he decided to skirt the lesson he had planned and began to speak of the French language, its glory, its struggle, its richness, and why it must not be allowed to die. Midway, he noticed the class had fallen silent and wondered if like other days he had failed on that day as well.

He was wrong. The class clapped when he ended and, one by one, each student came up to him with moist eyes, said “sorry” and walked away. When everyone had left, he noticed the blackboard. Before leaving, one boy had ­written, “Sorry sir. Today we know what we missed.” 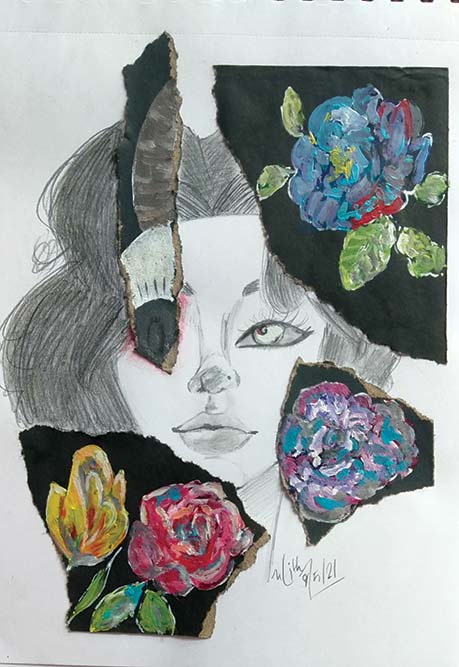 Is the generation that has spent over a year in the digital classroom beginning to realise what they are missing, albeit symbolically? Would the joy of bunking, getting distracted, be less once the pandemic fades away?

A colleague, with whom I shared the above story, told me she believed the grief of ­missing the classroom, the space they inhabited and took for granted, is the reason why so many students wanted the exam postponed. “The classroom, the teachers, the exams were part of an indivisible whole. You take away one, you take them all. In the mind of a student, these are intricately bonded in a gestalt, as it has been for generations. The separation from one evokes separation from all of the rest at the same time.”

Is the generation that lost a whole year of their lives—suddenly, without warning—­trying to cope with it in an insidious manner? Will it become part of their identity and ­personality, a core structural element that defines their humanity, and manifest itself in later generations? As a psychologist put it, “Never before in human history has the ­entire mankind dealt with the issue of ­separation from each other on such a vast scale as now. Separation once faced only ­during death, or transitions in life or war, is now an irrevocable everyday reality that has snatched from us one of our most precious identity elements.”

Elisabeth Kübler-Ross, the pioneer in ­near-death studies, once famously said the deepest grief in life is not the loss of the ­object, but what the loss symbolises and ­informs our imagination about the life that could have been with the object, had we lived it differently. Growing up with that ­awareness often brings us face to face with who we really are, and what we could have done to make our loss more bearable.

Covid has destroyed the ­sacrosanct space that existed ­between the teacher and the student for centuries.

The teacher whose going away started me to pen down these thoughts is not the only one. The role of teachers too has changed overnight during Covid. Many a teacher had to change their persona to adapt to the stress that virtual teaching brought about, and to deal with the stress in their students. The other day, a fellow teacher remarked that she is more confused about her role than ever before. “I am more a counsellor today than an instructor. The world may think our job has become easier due to the lockdown, but it’s the other way around. In the past one month, I have dealt with depression and suicidal tendencies in a few students. It left me with a feeling of inadequacy, as I am not trained for this. And I have to teach without the behavioural cues that are integral to ­understanding each student.”

Can one be a mentor and a teacher at the same time? As more and more teachers are thrust on with this extra responsibility, there is unease, a discomfort about the role. Most of them take it on grudgingly, and try to play safe so that they don’t get into trouble. Not that they resent it, but they are aware it’s a separate and complex role requiring ­different identity elements. Today’s student finds life and relationships more complex than ever before. And there are no easy ­answers. Mentoring them requires wisdom, calmness and therapeutic skills that may come after years of experience and training in a direction different from instructing a curricular subject. This is becoming a major reason for high attrition rates among teachers. Unless checked, it may ring the death knell of the profession as we know it.

Recently, one of my relatives gave up teaching after 17 years in the field. “I felt a fatigue ­answering the questions of students and dealing with their life issues. When I started, only one of 40 students would come out with such issues. Now, every third student poses questions about life that I can’t answer. Sometimes I wonder if it’s me who should be answering these. Shouldn’t these questions be asked of the broken families or the society that is falling apart, from which they come? I felt indescribably inadequate after one of my colleagues was blamed, when a student of her online class committed suicide. Everybody wondered why she hadn’t picked up cues. But was she supposed to instruct, or should she have been counselling the class during that one hour?”

Covid has destroyed the sacred, sacrosanct space that existed between the teacher and the student for centuries. Like the student I wrote about at the beginning, who grieved over missing out on bonding with her teacher, perhaps thousands if not millions are waiting to redefine the relationships that once existed and may take ages to come back. It is important we realise this vacuum that has emerged, threatening one of the most cherished and lasting structures of human existence.

Ripples In An Inner Lake

Is Your Child Tired Of The Pandemic? Act Now

Lonely Eyes Fixed On The Screen

The Textbooks Do Not Tell Us…

Beyond Walls And Mirrors