The deep distress has not swayed the CM. For, Chouhan has an RSS shield around him. 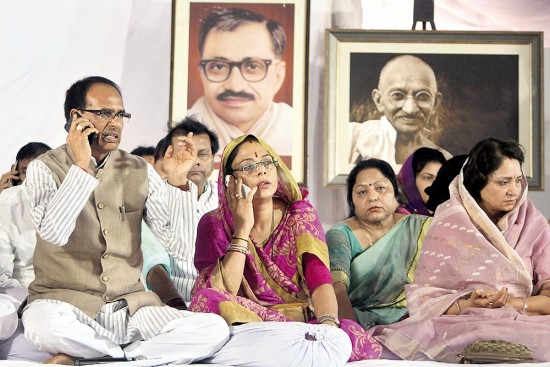 It had been a genuine case of farmers’ gri­evance untended for seasons toget­her. Cumulated anger began simme­ring since January this year, but the Madhya Pradesh administration failed to measure its gravity. Early June saw an outbreak of protests that killed eight people in Mandsaur of fertile Malwa, while local reports said four farmers committed suicide in just two days towards the end of its second week. None of these has unsettled chief minister Shivraj Singh Chouhan, who has been in the seat of power for two-and-half terms now. For, his party, the BJP, is in a catch-22 situation: the CM continues to be a popular leader to date among the voters of a state that has given the saffron outfit 26 out of its 29 MPs in 2014 general elections.

Farmers had been under distress for several factors. They had prepared a well thought-out calendar: rabi crop had been cultivated by mid-February; wedding season was in April-May. Farmers in nei­ghbouring Maharashtra were slated to protest this month, to which their counterparts in Madhya Pradesh unanimously decided to join for 10 days starting June 1 when there was less number of weddings. There was a WhatsApp message sent out, asking to shut down Malwa villages with no trade—and it went viral.