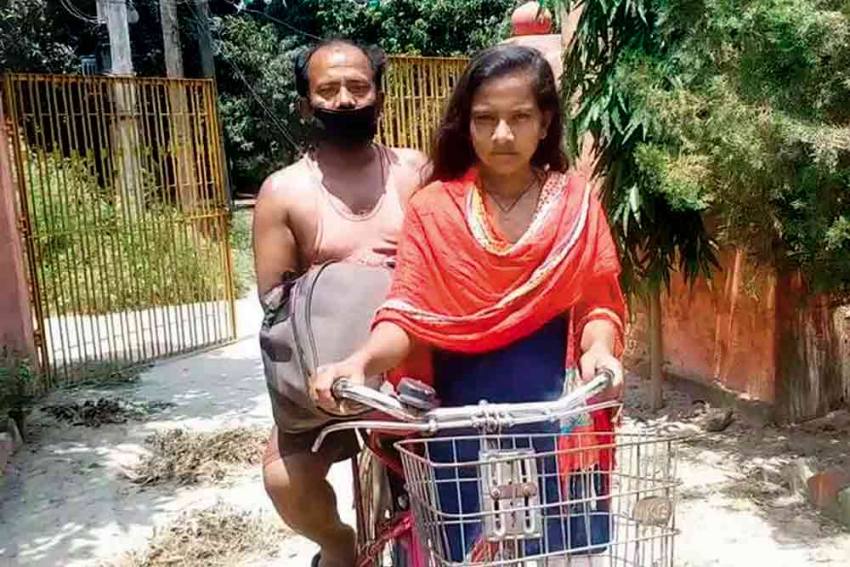 Jyoti Kumari, her father and the bicycle that brought them from Gurgaon to Bihar
Outlook Bureau July 09, 2020 00:00 IST Cycle Girl In Filmy Feud 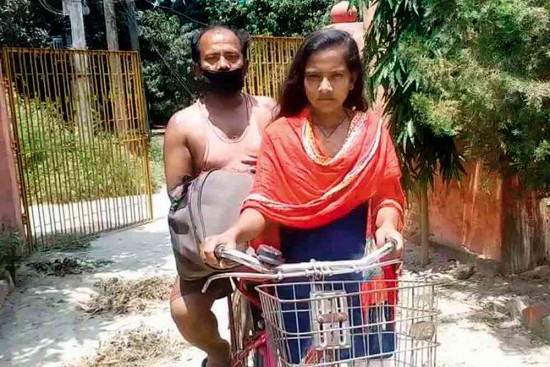 This is one story Bollywood would die to own—a doughty 15-year-old Bihari girl bicycles almost 1,200 km over eight days from Gurgaon to her native village in Darbhanga during the nationwide lockdown, with her ailing father riding pillion. Jyoti Kumari’s feat this past May was undoubtedly extraordinary, praiseworthy. It was also emblematic of the hardships the poor—her father was an e-rickshaw driver in Gurgaon—faced when harsh restrictions were imposed to contain the Covid outbreak. The press, NGOs, politicos, government officials and retweet-hunting twitterati praised the “Awsum” teenager, and deservedly so. The New York Times screamed: Jyoti, the “lion-hearted”. Bollywood wasn’t far behind stirring its greasepaint. It must tell the story—in a way only it is capable of. It smells the cash and cachet—Covid or no—from a tale that has riveted the nation.

In an industry where right and wrong are as fake as glycerin-induced tears, Jyoti’s journey is now the source of a controversy with filmmakers fighting over the story’s ownership. The row panned out when filmmaker Vinod Kapri reacted to news that production company Wemakefilmz has acquired legally exclusive motion picture rights for the story. Kapri said his Bhagirathi Films Pvt Ltd (BFPL) had an agreement on May 27—ten days after Jyoti reached her village—with Mohan Paswan, the teen’s father. He tagged a video on Twitter showing the signing of the contract. His company reaffirmed the claim, saying BFPL transferred 20 per cent of the contract money into Paswan’s bank account, with an agreement that the balance will be paid when the project begins. A PTI report quoted Mahendra, an associate director with BFPL: “Today, we came to know about the new agreement, which is illegal and a breach of contract (for film, web series and documentary) with Bhagirathi Films. We request Mohan to cancel this new contract and put an end to the dispute.”

But Wemakefilmz, a nearly two-decade-old venture of four friends united by their love of movies and documentaries, said the previous contract is void because Kapri was not present during the signing, it was done through “somebody” else and “there was no sign of Jyoti or her mother”. That agreement “will not have any legal value”, the company asserted, before clarifying that “we have crossed-checked” that contract. Wemakefilmz said its contract with Jyoti and her family has been signed, notarised and registered by the company’s partners— Shine Krishna, Sajith V. Nambiar, Mohammed Miraj Chathoth and Fairoz Chirammal. Krishna, who would be directing the movie, had said the project would begin in August.

Jyoti’s tale now spins more than the turns her bicycle wheels made and it is likely that a courtroom scene could become a jump cut—the oh-so-unnecessarily Bollywoodish sideshow to a gripping story.