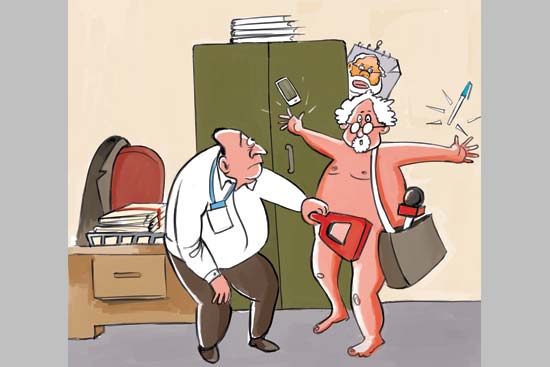 Bureaucrats in the Modi governm­ent are a completely terrorised lot. So much so, officials across depar­tments are taking extreme, even comical, precautions while talking to journalists. During a regular conversation, a senior IAS officer in Shastri Bhavan first wanted to know if the reporter’s phone rec­or­der was on. He refused to speak another word until he was satisfied the instrument was switched off and put away. He stopped again, in two minutes, this time to confirm if the Reynold’s pen the reporter was using had a recor­der. Excusing himself briefly during the chat, he came back in and, before sitting down, pulled down the framed photograph hanging on the wall in front of him. Checking it thoroughly for a camera, he apologised for demonstrating such trust-deficit: “I am very sorry, but you should understand that we will be hauled up for no reason. Better safe than sorry.”