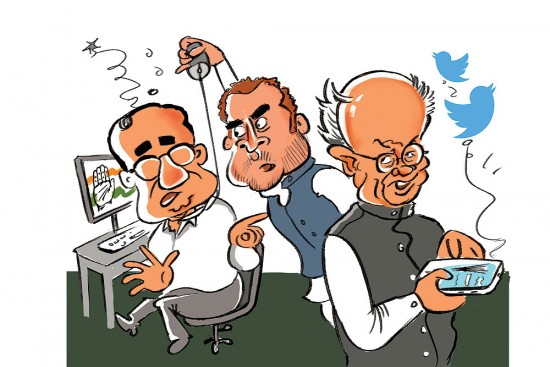 It is not just Rajnath Singh, 64, who is having trouble with Twitter. So indeed, it seems, is Rahul Gandhi. Digvijay Singh, 69, was apparently asked by the Congress vice-president, 45, to explain why he’d only tweeted about NaMo on a certain issue when Arvind Kejriwal too was on a weak footing. A printout was produced as proof. Amused, Singh had to pull out his phone to show that his next tweet did indeed target the Delhi CM. It was now Rahul’s turn to exchange glances with his media advisor Ajay Maken. Wasn’t it party spokesman Tom Vadakkan who said on TV in 2009 that “Tweet is a very lonely man, and he needs counselling”?