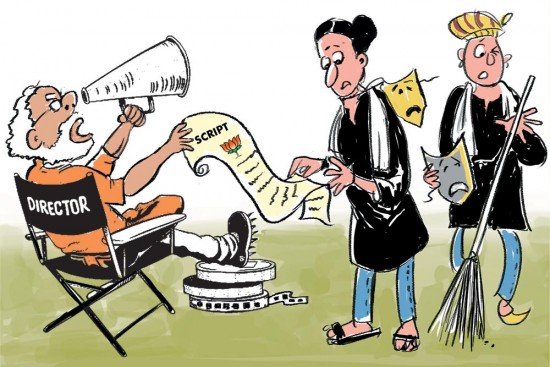 New Delhi
Rules from the regime

It’s no secret that NGOs are feeling the heat under the Modi regime. Office-bearers of registered NGOs were required to appear in person before ministry officials this year for getting their annual grants cleared. Some theatre groups registered as NGOs had reportedly been told to prepare plays on the government’s Swachh Bharat campaign and take them to schools. The plays had to be videographed and uploaded on YouTube. Other NGOs have been asked to junk their activities in favour of other pet government projects like Skilling India.

After taking over the reins from his brother Aveek Sarkar, the new head of the Ananda Bazaar Patrika group, Arup Sarkar, held a private meeting with ABP editors and reporters in which he discussed the media group’s “approach”. He reportedly said while the group would strive to be neutral and unbiased, its reportage in the initial days may seem somewhat “pro-Mamata” to counter-balance the negative coverage in the run-up to the assembly elections despite which Mamata won with a thumping majority.

The fresh camaraderie between Narendra Modi and Telangana CM K. Chandrasekhara Rao has left the Chandrababu Naidu camp in an uneasy state. At a recent public meeting, KCR showered praise on the PM and Modi returned the flattery in equal measure. Such chemistry has rarely been witnessed between Naidu and Modi. Naidu is, however, cautioning his colleagues from jumping to conclusions. He feels Modi will not grant anything special to Telangana while matters in Andhra remain unresolved.

Heard A Union minister was behind the BCCI brainwave to...