Delhi, Where The Wave Breaks

The Congress high command is miffed at Jagan’s stunts, but ground realities are a concern too 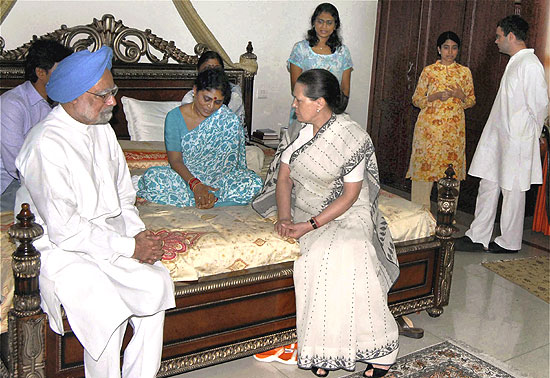 For Congress president Sonia Gandhi, the campaign led by Y.S. Jaganmohan Reddy and his supporters has placed her in an unprecedented situation. “This is the first time,” a national party functionary says, “that the family of a regional chieftain is challenging the authority of Sonia Gandhi.”

Indeed, Sonia has indicated to senior party leaders that she cannot be seen to be succumbing to political blackmail. She has told them that she feels “betrayed”—she had, after all, given YSR a carte blanche to choose his candidates and ministers. But sources also add that she is acutely aware of the ground realities—that 71 of the party’s 154 MLAs are first-termers who owe their seats and victories to YSR, and that the many businessmen whose futures are entwined with that of the YSR family are backing the campaign. Adding to the atmosphere of rebellion have been fan suicides and college students hitting the streets. “It’s a lethal mix,” a Congress leader says, “of corporate interests and mass sympathy.”