Diary: Jangal Santhal And Kanu Sanyal Don’t Live Here Anymore…. This Is Not That Naxalbari

Yes, it’s a 180-degree turn. The BJP won this assembly seat by a whopping 58% vote—saffron and TMC flags fly everywhere. And the only Left party in the fray scored less than NOTA! 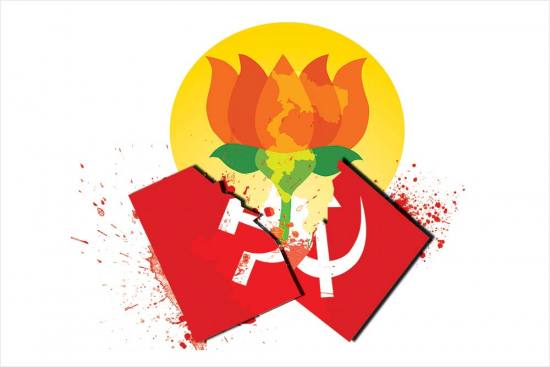 Our Home Of Revolution

Naxalbari has been enshrined in post-independent India’s political history as the birthplace of an influential armed uprising. On May 25, 1967, the tiny town and laidback block in the Siliguri subdivision of West Bengal’s Darjeeling district witnessed a peasant rebellion that triggered a nationwide political insurgency against systemic injustice flourishing within our democracy. When I visited it, tucked into the tea-growing Terai region at the base of the Himalayas, amidst the high-voltage Bengal assembly polls, I saw a different Naxalbari. The once red bastion of the ultra-left Indian Communists, with all its concomitant romanticism, was in my thoughts as I drove down the fast lanes of the National Highway 327 that dissects lush green tea gardens. The cult slogan of ‘Tomar bari, amar bari, Naxalbari, Naxalbari’ (Your home, my home is Naxalbari) of my growing up years in Left-ruled Bengal reverberated in my mind. I was in for a shock. It took me less than 20 minutes to reach the epicentre of this past revolution from Siliguri’s Bagdogra airport. The road to Naxalbari from the highway sprang many surprises. Posters, banners, flags and cut-outs of the ruling Trinamool Congress (TMC) and the BJP were plastered all over. I couldn’t spot a single Communist flag. There was an obvious reason. The Dipa­n­kar Bhattacharya-led ultra-left CPI (Marxist-Leninist) Liberation—the most pro­­mi­­nent among the 20-odd splinter groups of the original Communist Party of India (ML), founded by Naxalite masterminds like Jangal Santhal, Charu Majumdar and Kanu Sanyal -- withdrew from the electoral fray to bolster the ruling TMC against their “class enemy”, the BJP.

To reach the spot that witnessed the famous clash between the police and villagers on that fateful day in 1967, one needs to take a single-lane road running parallel to the railway tracks towards the Nepal border check post of Kakarbhitta across the Mechi river. The tiny piece of land next to the Bengaijote Primary School is where a memorial for the martyrs was erected by the CPI(ML) many years ago. There were seven busts—of Lenin, Stalin, Mao Zedong, Lin Biao, Charu Majumdar, Saroj Dutta and Mahadeb Mukherjee, while a smaller plaque next to these had the names of the 11 killed that day—Dhaneshwari Debi, Seemashwari Mullick, Nayanshwari Mullick, Surubala Barman, Sonamati Singh, Phoolmati Debi, Shamsari Saibani, Gaudrau Saibani, Kharsingh Mullick and two unnamed deceased children. I was surprised to see there was no bust of local tribal leader Jangal Santhal. The bust of another stalwart of the movement, Kanu Sanyal, was also missing.

A five-kilometre drive on the serpentine tar road outside the Naxalbari town to Sabdella hamlet brought me to one of the most remarkable relics associated with Sanyal. His dilapidated hut turned out to be the only place other than the martyrs’ memorial where I could spot the red flag with its iconic sickle and hammer. The once firebrand Naxal leader had ended his life by suicide. Ironically, Sanyal’s radical revolutionary ideology, too, died a slow death in his life-long laboratory of Leninist socialism and Maoist militant communism. The recent drubbing of the Left and the political harakiri by his party CPI(ML) have turned out to be the last nail in the coffin of Naxalbari’s epochal communist past. While crisscrossing the place I could see how the socio-political space, once overwhelmingly occupied by the ultra-left, has been occupied mostly by the BJP. This summer’s assembly election result was an obvious manifestation of it.

Darjeeling district, along with a significant portion of North Bengal, somewhat withstood Mamata’s wuthering ‘khela hobe’ (game’s on) war cry. The landslide victory of the BJP’s Anandamay Barman from the Matigara-Naxalbari assembly seat by a whopping margin of over 70,000 votes and with a staggering 58.1 per cent of votes, witnessed a paradigm shift in the political history of Naxalbari. Believe it or not, there was a Communist hand too in that victory. The Darjeeling-headquartered Communist Party of Revolutionary Marxists (CPRM), founded by former CPI(M) MPs Tamang Dawa Lama and R.B. Rai, conjured up an unprecedented left-right alliance with the BJP. Even with their minuscule and inconspicuous existence, the hill party did help Barman in a besieging battle that saw the only Left party in the fray, SUCI (C), winning a meagre 1,000 votes—less than the NOTA. The und­erlining fact was the completion of a 180-degree turn in Naxalbari.