Sayani Gupta, a star-struck teenager who acted with SRK, reveals what endears the superstar to his millions of fans across the globe. 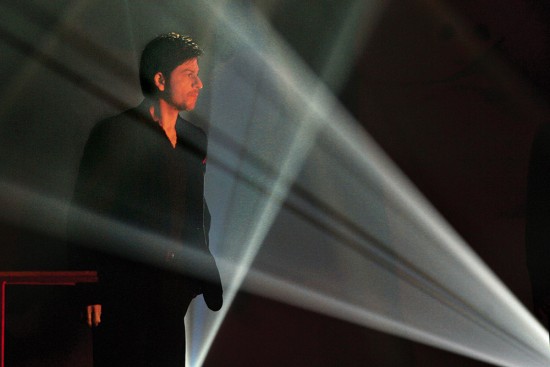 Matisse painting. My farewell gift to ‘Shah sir’—that’s what everyone on set called him, although I never quite figured how I wanted to address him. I had the framed painting in my hands on the way to the screening (of Fan). But the most crucial part was still left, the message. The one I had to write behind the frame. The one that had to do justice to all that I intended to tell him all these years since I was a child, all that he meant to me. Reminiscent of the imaginary conversations I had had with him. So here I was, at the YRF atrium after the screening, dancing with him and twenty others to Chhaiya Chhaiya, and looking at this moment with disbelief and ­wonder. I was finally done, satiated. I had had the fill of my SRK rendezvous. From having loved him, worked with him, chatted with him, accidentally scratched his chest, travelled with him, observing everything that he believed in and stood for. My heart was full but was now pounding with anxiety as I still had to write the message behind that painting before gifting him. And before he left.

So, I step outside, and sat alone on the stairs, ­finally writing this message, until I was interrupted by an actor. Soon after, a bunch of people came out, breaking the five minutes of quiet solitude I needed in order to finish this message. And as luck would have it, soon enough, someone came and announced that Shah had left. And here I was, sitting with a half-written essay behind a Matisse painting, with the other half bubbling ­inside my mind. Heartbroken that Shah will never know what I wanted to tell him, will never know why I chose this painting for him.

In this, Matisse depicted a woman sitting alone at a table by the window and looking straight at the viewer/us. She had a lost, sombre expression but had so much depth in her eyes, as if she had so much to tell us. And she expected us to know, somehow. Kind of reminded me of Shah’s eyes, the most extraordinarily deep eyes that could speak volumes just in one look. I came back home and put up the painting on my study wall. It ­remained there, until it was slowly eaten up by mould. It remained as a painful, poignant ­reminder that the imaginary conversations with him will, forever, remain untold.

Shah Rukh Khan has been the beacon of Bollywood’s composite culture. In my mind, he stands for the very idea of India. An amalgamation of cultures, religions, diversity, rigour, kindness, humanity and magnanimity. We Indians are a mixed bag of heterogeneous paradoxes and Shah embodies just that. And there is nothing conventional about his journey or his personality.

He not only broke conventions but also changed the narrative of what was acceptable. He started with TV, went on to play the anti-hero, something that was unheard of at the time. Then played the earnest boy-next-door and went on to become the King of Romance. He even ventured into being a superhero, when no one else dared to. He, with his own journey, had managed to spin up the Hindi film industry that was mostly restricted to film families, dynastic glory, royalty; it was now accepting of a skinny, dusky Pathan boy with no Punjabi looks in particular, with deep eyes and deeper dimples, as a Hero. And not just any Hero but one who would be loved for decades and by generations unquestioningly, resoundingly.  Who, even an incredulous academic Bengali mother would trust unflinchingly. 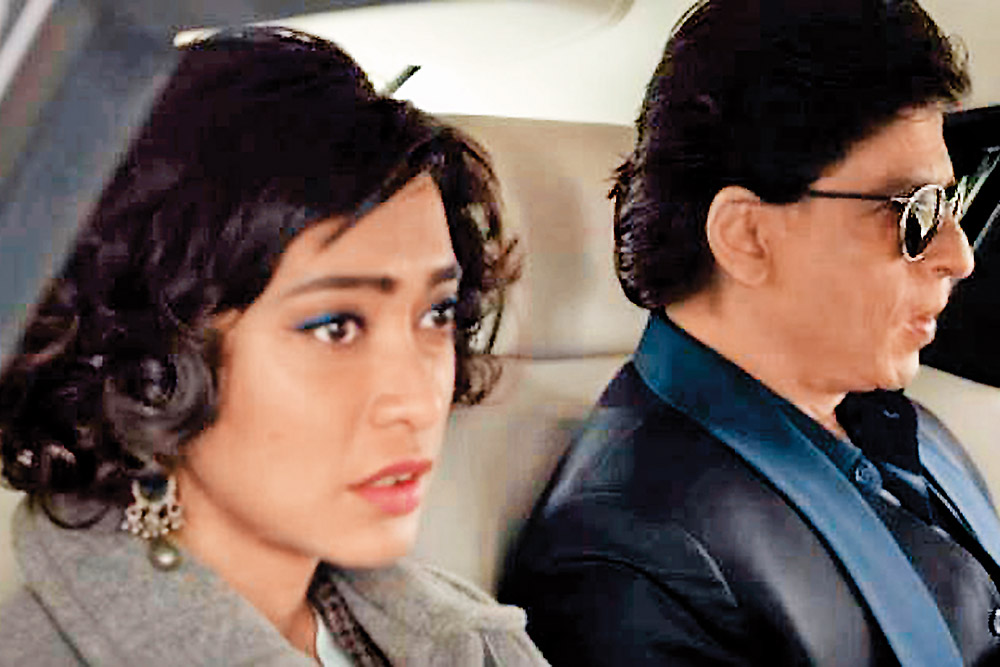 Co-stars Sayani Gupta with SRK in a still from Fan

My mother hadn’t really approved of the profession I chose, or even understood why on Earth, despite the education, would I want to become an actor. Until I featured in a film with Shah Rukh Khan. For a mother who abhorred Hindi films, didn’t watch much in her life, I found credibility overnight, not because I had worked hard to get into FTII, studied acting, auditioned my way through some credible films like Margarita With A Straw by then. But just because I was in a film with SRK. I have still not completely understood why, but my guess is, she felt reassured, she trusted him, what he did, where he came from, for what he stood. She trusted the idea of him.

So, she finally approved of her daughter, or at least the choices she was making. That is the power Shah has, in transforming the average Indian mind and propelling a subtle revolution of sorts. Where an average unyielding Indian parent could look at one anomaly and consent to their child pursuing arts or films instead of the two most worthy professions in their books.

Shah’s biggest contribution is the rite of passage that he has singlehandedly enabled. The millions across generations he has inspired. Innumerable actors, directors, even technicians, today can vouch for the fact that he, with his own narrative, made them believe that it is Possible. To come from a non-filmy background, a middle-­class family and ­establish himself in this big city of Bombay, to make a name, to be ­respected and still do what you love doing…films, arts, cinema.

Shah Rukh Khan has had the strongest influence on women. Women of all cultures, age groups, upbringing. From all parts of India, of the world. Opinionated women as well as credulous women. Shah gave them all a window to imagine how they wanted to be loved, looked at, held. It was a prism through which women found how they wanted to be seen, this was the gaze where they were an equal in a ­romantic relationship. Finally, the agency was in their hands. Their consent was important. Somewhere through his films, he ­empowered them into believing they deserved better. They could desire a man who would treat her with ­affection, love and respect like he did in his films. And notions of the desirable man and the ­efforts he should put were drastically changing. 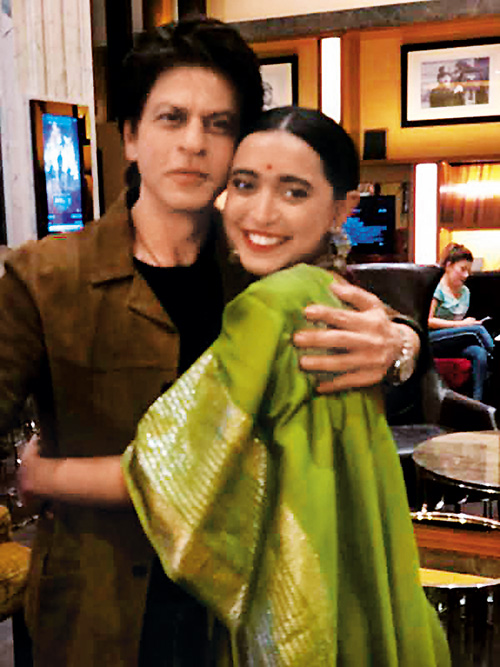 Sayani Gupta with SRK at a film screening

He is also the first actor—might be the only one—to have asked for the female co-star’s name to feature in the first slate of credits, instead of his, something that might be difficult for most male egos to accept, I would imagine.

I remember, when we were shooting for Fan in London, there were a bunch of girls quietly sitting at the reception in our hotel lobby every evening, smiling at everyone. We all got curious wondering if they were part of our crew. We even saw them on set one day standing at a distance, observing. Finally, we learnt that these were three friends living in different parts of Europe, all teachers, who were ardent Shah Rukh Khan fans and travelled everywhere he shot in the UK/Europe just to be there, to watch him. They didn’t bother anyone, didn’t come in anyone’s way, didn’t want anything. They were just there, to witness this man from a distance. He knew they were there. They knew he knew. But there was no communication. I found it the most poetic thing ever. But his ­relationship with women has indeed been poetic.

Last year, on Gandhi Jayanti, when I saw a tweet of his, I was disheartened and tweeted him to speak up. Something I’d only do to someone I thought I had a right over or someone I thought who would understand. Because, as he said, we can’t help it, we all think we own a piece of him. And somewhere, he allows himself to be owned. I did it without a second thought, I questioned him publicly. I did it because I thought I could, I had the right to. When people asked me why I did, the only ­answer I had was I knew he would know, he would understand. He ­always does. He is one of the most level-headed people I have ever met. And definitely one of the smartest.

Just a month later, the storm started. And I got one of the biggest lessons in life. To never judge someone from a distance as to why he/she chooses to stay quiet when they do, even in the face of injustice, because one will never know what situation they are in. It’s not easy to be at the top. He is always judged by both sides. The right doesn’t approve, because of his last name and who he is, and the left will always critique him for not speaking out enough.

In today’s socio-political environment, we might want to consider what Shah and his identity really mean and how important it is to maintain a ­balanced ecosystem.  For someone like him, who exemplifies India’s cultural and religious diversity, who has journeyed from a middle-class household, toppled conventions and challenged status quo all his life, who has created such a humongous global appeal as one of the most successful actors of our times, this phenomenon is not just worth studying, applauding and rejoicing. But also worth protecting.

ALSO READ: Love, Longing And Shah Rukh: Growing Up With DDLJ In The Time Of Mandal And Kamandal

Today, when the black is so stark from the white and there is no scope for the grey, it’s important we understand that Shah Rukh Khan’s exi­stence as an idea is crucial for the ­equilibrium and sanctity of India’s profound ­prolific plurality.

(This appeared in the print edition as "To Sir, With Love")