An artisan’s nostalgic tribute to the Srinagar that was 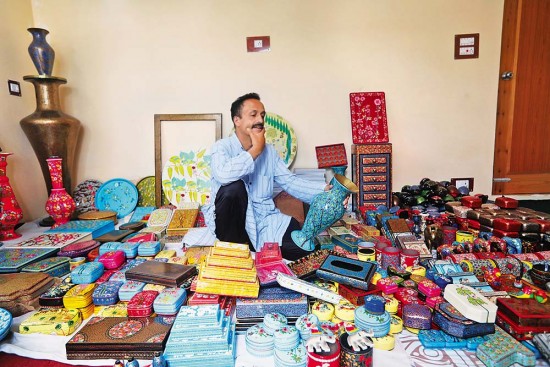 It’s a work in progress—a map of the city of Srinagar that is being made using papier mache on a five-by-­seven-feet piece of cloth. “This map reflects what we have done with our collective inheritance as a people,” says Maqbool Jan, a 50-year-old Kashmiri papier mache artisan who lived with the idea for a long time before he found a way to execute it. When he saw a photograph of a map of Srinagar on a shawl—one of four artworks ­com­missioned by Maharaja Ranbir Singh for the Prince of Wales, according to historians—he knew what he had to do. “We know all that we have done to our heritage. It is before our eyes. Through this map, I am telling people what we had,” says Maqbool.

Maqbool feels a deep sense of loss when he sees how his city has been changing over time—rising pollution, the shrinking Dal lake, disappearing water bodies and old ­heritage buildings, and fortification of cultural sites. In his work, he is ­trying to “set it right”, restoring the old glory of Srinagar—“if not in the real world, I can at least do it through my art,” he says. The map, he estimates, will take another two or three months to complete. It shows the Dal as it used to be in the past, covering a much vaster area than it does today. Also shown are numerous shrines, mosques and temples on the riverfronts of the Jhelum in Srinagar, all depicted the way they used to be in bygone times. An old woman is seen raising her hands for prayers outside the Jamia mosque. The map features tall, old houses, majestic chinar trees, the Mughal gardens, the old bazaars, children riding horses and swimming in streams, boats moving on the Jhelum, the Dal and the canals. 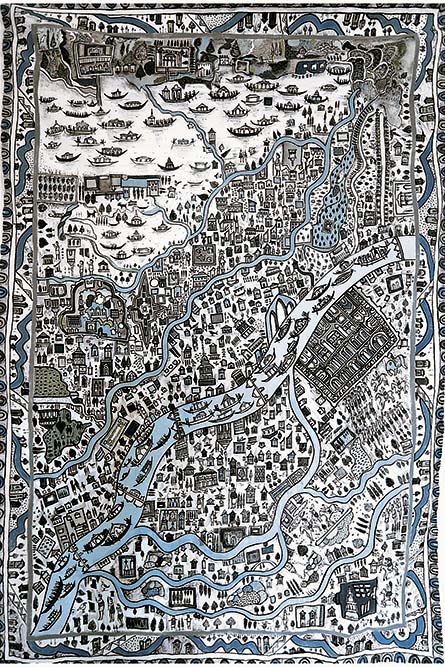 It is obvious that the artisan is in love with birds—they are seen on all the religious structures on his map. “I have used Sufi colours in this map. They are muted colours. There is no red,” says Maqbool. Once it is completed, Maqbool wants his map to be displayed at any building of cultural importance in Jammu and Kashmir or even outside the region.

This is not the first time Maqbool is using papier mache on cloth. A pioneer of the technique, he has been doing it for the past 20 years, hoping to popularise the craft among younger generations. “I have been calling it ‘Kashmir ­fabric painting’. As an artist, I feel that the experimentation has been very successful,” he says. He has used the technique on wood too—for example, the front door of his house showcases his artistic flair—as also stone and glass. The craft ­involves minute detailing and rendering, and working with a variation of different colours and shades. It requires ­masterful handling of the brush, and being time-consuming, ­demands a lot of patience and dedication. All these factors add up to the market value of the ­finished artefact. 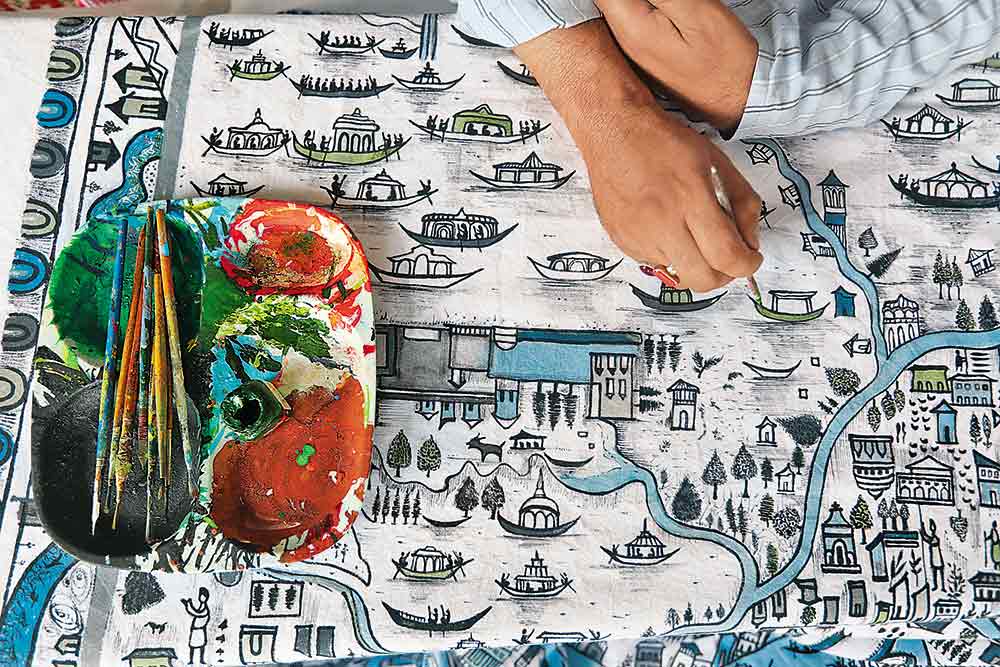 According to Saleem Beg, head of INTACH’s J&K chapter, papier mache craft in Kashmir began with the making of kalamdans (pen cases) from paper pulp. The kalamdans, he says, were covered with floral or geometric patterns and ­finished with a coat of rogan (varnish). It was for this reason that the craft was referred to as kar-i-kalamdan (the art of pen cases) or kar-i-munaqash (the art of decorating). The earliest references reveal that the craft travelled from Iran to Kashmir. “Over a period of time, the craft has evolved into a distinct art form of surface decoration (naqashi) ­applied over an object made completely from paper pulp or employing at least one layer of paper. Thus, the term papier mache is applied to a craft that has come to represent the technique and process of surface decoration rather than the composition of the object that is to be decorated. Never­theless, the actual painting or naqashi is always ­applied over a layer of paper,” Beg says.

At Maqbool’s home in Mughal Mohalla of Srinagar’s Lal Bazar, art is a family affair. His wife Masrat Jan, a three-time award-winning artisan, is one of the few women ­associated with papier mache in Kashmir. His brother, Firdous Hussain Jan, 47, and sister-in-law Gowhar are also artisans. All of them work together.

Maqbool says Kashmiri artisans have over the years used their craft to provide insights into their society. Like poets, they have reflected on contemporary ­situations and through their artworks tried to portray the “paradise lost”.