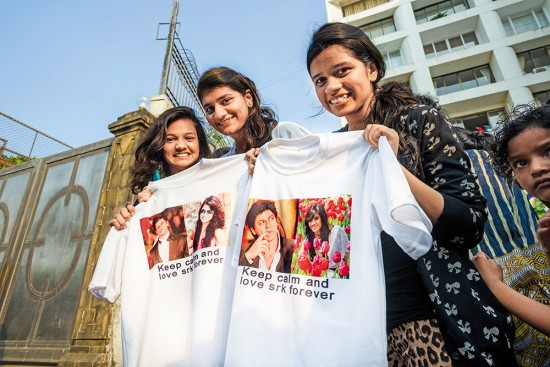 Brand SRK is a much bandied about term. But what are its coordinates? More importantly, how does it connect with the 24x7 news cycle, obs­essed with Shah Rukh Khan’s son Aryan’s arr­est following a dubious drug-bust?

It is important to first map the brand’s textual trajectory thr­o­ugh Khan’s cinematic oeuvre. SRK as a brand emerges in the late 1990s, fuelled by the overwhelming success of Aditya Cho­pra’s Dilwale Dulhania Le Jayenge (1995) and Karan Johar’s Kuch Kuch Hota Hai (1998). Characters essayed by SRK—lover boy Raj Malhotra and yuppie Rahul Khanna—rewrite the psychotic anti-­hero image that come in films that preceeded them: Baazigar (1993), Darr (1993) and Anjaam (1994). The sheen of the later, romantic-domestic dramas, speaking to a rapidly liberalising economy and the attendant rise of the Hindutva mov­e­ment, stamps out the grim residue of the angry young man, traces of which appear via mobilisation of the revenge gen­re—in SRK’s earlier works. Johar’s following productions—Kab­hi Khu­shi Kabhie Gham (2001), Kal Ho Naa Ho (2003) and Kabhi Alv­i­da Naa Kehna (2006)—build upon the enduring Raj-Rahul fic­­t­ion, but begin to transmute the college-going lover-­boy into a more complex adult, who may be biologically imp­u­re, diseased and dying, or sexually/morally transgressive. This mutation is also significantly marked by unmooring the “Indian” hero from the coordinates of the national territory (initiated by DDLJ), who will hereon be located in the global metropolises of London and New York, mediating the challen­ges of transnationalism. This body of films begin to acquire new audiences in affluent and cosmopolitan South Asi­an diasporic sites, and in previously unb­ro­ken Western territories like Germany, Austria and Switz­­er­­land. Retro­spec­t­i­v­ely, as brand SRK ascends to global heights, “Bom­bay cinema” gets inaugurated as “Bollywood” on the global stage. Brand SRK then comes to function as the shorthand for pop­­u­lar Indian cin­ema in its shinier, Bollywoodised avatar. 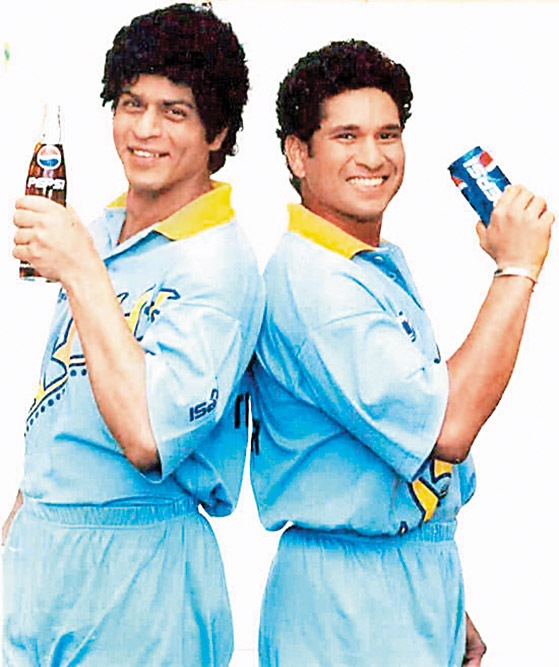 Bombay cinema has always escaped easy ideological readings. In keeping with this vagrancy, SRK’s stardom, too, evi­n­ces disru­ptive strands that destabilise monolithic not­ions emerging from his pop­u­lar canon. Dil Se (1998) marks rom­antic “national” imaginings as misplaced and doomed; Swades (2004) showcases reverse migration; Chak De! India (2006) questions the homogenising majoritarian fundamenta­list discourses; My Name is Khan (2010) speaks to global Islam­ophobia in the post-9/11 world; and Raees (2017) dares to for­e­ground min­ority subjectivities. In terms of their box-office clout and circulatory currency, the­se films do not match the cul­tural resonance of the former set. Howe­ver, Hindi cinema’s endura­n­ce does not lie merely in distribution of its fil­mic tex­ts, but more empha­tically in their fragmentary disseminations. Sou­nd-­images of Chai­yya Chai­yya persist, esca­ping its textual borders, to circulate endlessly thro­ugh global cultural texts serving as a recognisable hieroglyph of Bolly­w­o­od. This Aug­u­st, when the Indian wom­en’s hockey team rea­ched the semi-finals in Tokyo Oly­mpics, the team’s “real coach” Sjoerd Mar­ijne was urged by the team’s “ex-coach”—the fictional Kabir Khan­—­to bring home the gold. The ban­ter between the real and the fictional had twitterati in chu­c­kles.

As Brand SRK begins to consolidate, specific films cast him in stories where the star plays upon his own persona, explicitly and reflexively: his own production house Red Chillies Enter­tai­n­ment’s Om Shanti Om (2007) and Billu (2009); and Yash Raj Films’ Fan (2016). Another strand in this braiding will constr­u­ct an affi­nity with Tamil cinema’s tradit­ions of star/fan-dom, evoking the regional megastar Rajinikanth: Billu, Ra.One (2011) and Chen­nai Express (2013). Brand SRK, then, dislodges the long-­standing opposition bet­w­een tradition and modernity, ser­ving as an intermedia, mediating Bolly­w­ood as som­ething that can at once be natio­nal, global and regional. If the textual terrain of Brand SRK is consistently transmutating, speaking differently to its divergent fans—straight/queer; men/wom­en/transgender; wealthy/middle-class/poor;­ rural/urban/cosmopolitan; regional/natio­nal/transnational/global—­then the extra-­textual terrain reveals the instability even further. 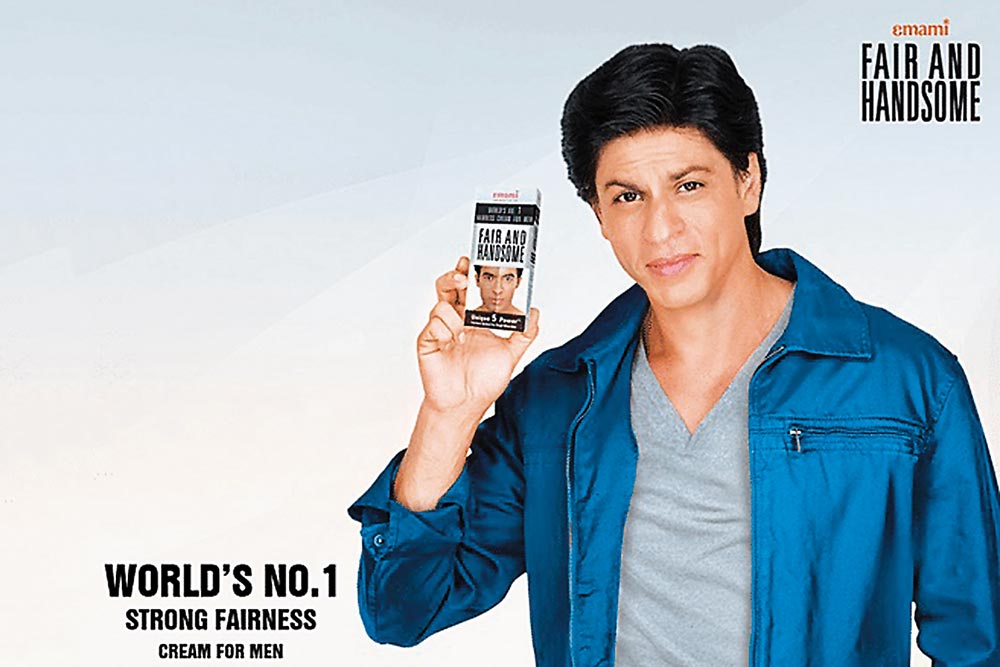 The media’s interpretation of Brand SRK is predominantly mapped in terms of his com­me­rcial endorsements. From the outset, Khan has positioned himself as an indiscriminate celebrity-endorser, always available for hire. Ind­u­stry insiders analyse this as a strategy that ena­­bled him to sign films at half-the-price then comma­nded by his star-peers, instead earning his staple from commercials. Beginning small with Liberty Shoes (1988) and Brahma­putra Tea (1993), SRK quickly went on to associate with multinational corporations: Pepsi (1996), Hyu­n­dai (1998) and Tag Heuer (2003). His end­or­sement ensured an exponential 60 per cent annual growth for the luxury watch brand wit­h­in two years. The leading advertising monitoring firm The Agency Source (TAS) ind­exed that between 1994 and 2006, SRK appea­red in 281 print and 172 TV ads. Bra­nd SRK then inaugurated a new revenue model for film stars, where endorsements became the primary revenue sou­­­­rce instead of films. Over­all, the celeb­rity-­star has endorsed some 40 bra­nds that cur­ren­tly include Dubai tourism, Frooti, Dish TV, Pan Vilas and even Fair and Hand­some. Notably, Lux (2005) introduced SRK as its first male mod­­el in India, while Ree­bok (2010) laun­ched a collection of footwear and appa­r­el around the release of My Name is Khan.

SRK’s energetic presence has ensured his omnipresence, through constantly running ads, by framing him as conduit for a burg­e­oning consumerist society.

According to the Duff & Phelps “Celebrity Bra­nd Valuation Study”, SRK’s brand value sto­od at $66.1 million in 2019 and $51.1 million in 2020, accounting for the pandemic. Media rep­o­rts ind­icate Khan’s current cost for the shoot of a TV ad at Rs 3.5-4 crore per day, and his vis­i­bility across all TV channels is estimated at an average of 4 hours per day. SRK’s eminen­tly marketable, energetic presence has ensured the star’s omnipresence, through constantly running commercials, by framing him as conduit for a burg­e­oning consumerist society. Beyond cinema and advertising, his stage performances at public/private gatherings, and the numerous hosting gigs at awa­rd sho­ws in national and transnatio­nal sites, adds to the density of bra­nd SRK’s mediated ass­emblage. He is also prominently visible as the co-owner of thr­ee T20 cricket teams, most sig­nificantly Kol­kata Knight Riders, who he cheers publicly. All this is augmented by his rou­nd-the-clock visibility on internet and social media: follo­w­ed by 42 million on Face­book, 42.1 million on Twitter and 26.7 million on Instagram. 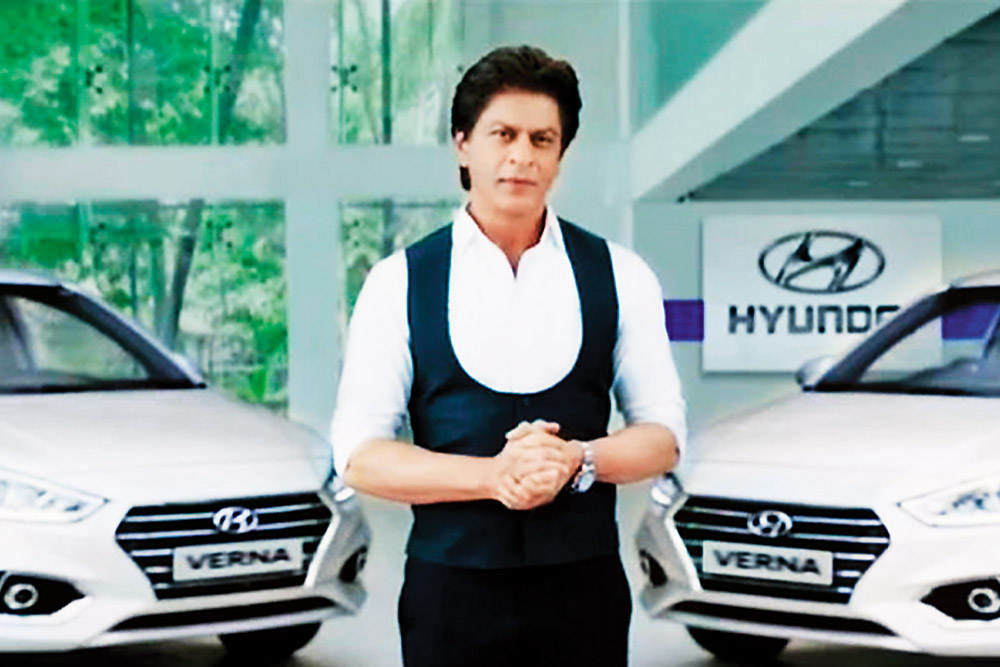 The sustainability of the polymorphous Brand SRK recently came to be questioned, following NCB’s arrest of Aryan Khan. On its hee­ls, the edu­-tech firm Byju (with SRK as its brand ambassador since 2017) faced calls of “Boycott Byju’s” trending on Twitter, and deci­ded to temporarily take ads featuring SRK off-air. The ads resumed after a 4-5 day hiatus, lea­­v­ing marketing gurus wondering if the resu­mption was incited by the social med­ia backlash from Khan’s fans or the prevailing T20 World Cup, where Byju is a major sponsor. Khan’s private life has always vital­i­sed his public aura: the early death of his parents; his interreligious mar­­riage with a Pun­jabi Hindu Gauri Khan; and his role as a father to his children: Aryan, Suh­a­na and AbRam. Even if Aryan’s arr­est and rem­and remain hig­h­ly questionable, the media cir­­c­us attempts to threaten the image of a resp­onsible father. Brand SRK has then revealed its instability and mutability sensitive to changes in context: social, cultural, industrial and ultimately, political. Is Aryan Khan’s arrest an omen for New India, in which a Muslim superstar cannot continue to serve as the metaphor for a Hindu-majority nation?

(This appeared in the print edition as "The Face of Another")

Priyadarshini Shanker, the writer, is assistant professor of Film Studies, University of North Carolina at Wilmington