Simran Chadha, an associate professor in Delhi University, recalls the time she acted with Bollywood superstar Shah Rukh Khan in a Doordarshan teleserial. 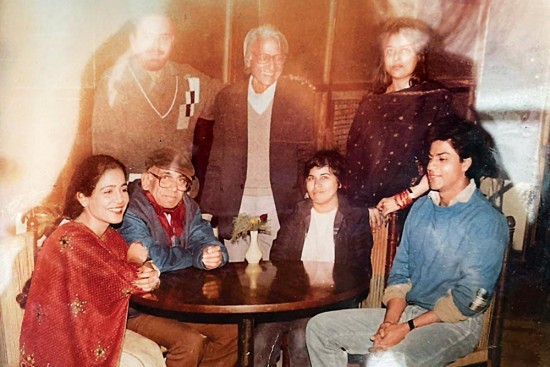 Once in a Lifetime

Dense fog, as is customary in rural Punjab during the winter months, had settled over the fields that morning. It was ideal for that crack-of-dawn setting needed for the opening sequence of Doordarshan’s tele serial, Doosra Kewal. By sheer stroke of luck for what would later prove to be a milestone of my life, I had been chosen to play the romantic lead, Mita, opposite a boy named Shah Rukh who was to play Kewal. He was a Delhi University student like myself and an ardent cricketer (as the rumour mill across campus informed me), and also a part of the annual performance Annie Get Your Gun initiated by the prestigious Lady Shri Ram College. Being with him proved well within my comfort zone. The stars seemed propitious and family consent was procured for my once-in-a-lifetime foray into the big, bad world of Bollywood cinema.

The director Lekh Tandon had stipulated that the entire cast and crew be in attendance for this opening shot so that all get the real vibe needed for a virtual recreation of Punjab in the aftermath of Operation Bluestar. Shah Rukh was everywhere—helping actors get the diction right in between doubling up as the clap boy, the assistant cameraman, the costume keeper for the sequences and what not. He was just everywhere and so in his element, be it watching the slow-burn of the camera lights or the tracking shot in action, focusing on the lone, beaded figure in a chequered blanket riding a bicycle through the fog, suggesting a close-up of the pain-wrought face as signalling the tragedy that was Punjab terrorism. The director called for a “cut”, okay’ed the shot and there Shah Rukh was, helping the crew with the pack-up of the expensive equipment.

His heart and soul was in this—one could tell. While the rest of us retired to our much beleaguered resting spots, Shah Rukh was energetically recce-ing with the producer across monuments to find the ideal mise-en-scene for another sequence. His love for everything cinematic was as palpable as it was infectious. It was difficult not to get caught up with it.

When I had trouble doing that lovelorn shot peering into his eyes because it was funny mouthing love-dialogues to a friend, he showed me the trick to it, as he did the glycerine trick for teary-eyed performances. He was just literally everywhere, offering a sun-shade to the NSD-trained actor, singing the title song with verve or inviting us for adda and chai at his mother’s café by the Safdarjung tomb.

The Khan in the Making

Soft-spoken Shah Rukh, with the twinkling eyes and the polished etiquette of his St Columbus education, won hearts. On the sets he was clearly living his passion, his dream, yet at every step of the way his manner exemplified a solid middle-class upbringing and value-system—the belief in the take-nothing-for-granted, apart from the work you put into the job.

His rise to superstardom as King Khan is testimony to that very ethos and so when the paparazzi pronounces his background as “not one of privilege”, it leads one to question what we, as a society, value as privilege? As for me, this past, like the ghost in Hamlet, crops up at inopportune moments, like a conference in Seattle or a lecture on Chaucer, and then I am “the girl who starred opposite, none other than Shah Rukh Khan”.

(This appeared in the print edition as "SRK Diary")

Simran Chadha is an associate professor with the University of Delhi