To Everything There’s A Season

In a deft inversion, Tarantino turns Once Upon A Time In Hollywood into a novel. Overlaying the two, we get insights on film-making, his pet themes and glory in his immersion into the late ’60s. 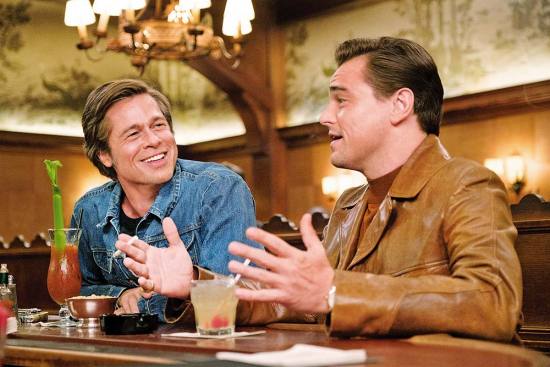 Quentin Tarantino is out with his first pulp fiction. It’s based on his last film, Once Upon A Time In Hollywood, has almost all the scenes from it and yet is a standalone 400-page novel. It’s a clever way to invert the usual line of ‘now a major motion picture’ on many books to ‘now a novel’. Turns out, Tarantino is as breathless a writer as he is a filmmaker.

In films though, for the last few years he had hit the same form as Virat Kohli has in his batting—patchy, with occasional flashes of his old brilliance. After the ambitious Kill Bill Volume 1 with his trusted collaborator Uma Thurman, Volume 2 was vacuous. His next two, Inglorious Basterds and Django Unchained, were lazy schoolboy fantasies which Tarantino has been itching to bring to the screen, the first about a bunch of Jewish American soldiers led by the swaggering Brad Pitt who pulverise battle-hardened Nazi officers, and the second where a freed slave, Jamie Foxx, and a bounty hunter go slash, cut, axe on a maniacal plantation owner. Next was the The Hateful Eight, where he was back to his pet theme of a bounty hunter gone bonkers, though in this closed-door drama more words flew than bullets.

But with Once Upon A Time In Hollywood, Tarantino was back in form. This, too, was in some ways a fantasy—his obsession with the Westerns of the ’50s and the ’60s—but is conceived and made with a lot of heart and wit (Brad Pitt’s stuntman throwing the actor playing Bruce Lee so hard in a mock-fight against a car it makes a Bruce Lee-shaped dent; Leonardo di Caprio’s thespian breaking down in front of an eight-year-old girl prodigy). The film is a careful and attentive reproduction of LA in 1969, with not just the brands and bands of that time coming alive but also the ethos, the culture and the attitude of its citizens. The somewhat burnt-out, afternoon-sun colour tone of the film has that ’70s movie feel. The soundtrack is rock and pop from ’60s radio channels—Don Steele, Deep Purple, Joni Mitchell. The mix of real and fictional characters from popular culture, cinema, music and ads can be mind-bending—the viewer is left wondering...did this happen or is it made up?

The film is a careful reproduction of LA ethos, culture and attitudes, circa 1969. The burnt-out, aft­ernoon-­sun colour tone of the film has a ’70s movie feel.

In ’69, Hippies are everywhere in the city, spaghetti Westerns are the rage, Roman Polanski after Rosemary’s Baby is the hottest filmmaker. For those who missed the film, here’s the plot. Rick Dalton (Leonardo di Caprio) is a washed-up actor who has starred as lead in a few hit Western films and TV series, but now only gets to play the ‘heavy’ (villain). Cliff Booth (Brad Pitt) is his stunt double, who also doubles up as his driver, caretaker and buddy. Roman Polanski and his wife Sharon Tate (Margot Robbie), along with her ex-fiance Jay Sebring, have moved in as their neighbours in Ceilo Drive, a quiet, leafy LA residential area. The city is ‘infested’ with hippies; they are everywhere—rummaging through garbage bins for food, in their shaggy hair and unwashed bodies (the girls in short, short, Levi’s cutoffs). Ex-con Charles Manson is their spiritual guru, who has his ‘family’ settled in Spahn Movie Ranch, a leftover Western set. (Sharon Tate, who was eight months pregnant, Jay Sebring and three of their friends were murdered in August 1969 in their Ceilo Drive home by members of the Manson Family).

The novel Once Upon A Time… reveals how much a filmmaker has to leave out in a film. All the character sketches of the leads as well as of the walk-in parts, all the back stories, the history of a place, the legend of a bar, the folklore of the stars, all that has to be squeezed into a five-minute scene. In the book, even Cliff’s pet pit bull Brandy gets a full chapter, how she came to be the killer dog she is. Cliff is a war veteran who counts at least 16 Japanese soldiers whom he has killed with a knife in close combat. He has also killed his wife and got away with it, which is hinted upon in the film as others murmur about it, but detailed in the book—it’s with a shark gun; the case is closed as a diving accident for lack of evidence.

In a hard-to-believe character trait, Cliff is also a film buff. Through him, Tarantino gets the chance to vent all his fetishes about the movies. According to Cliff, Hiroshima Mon Amour is a piece of crap and Michelangelo Antonioni a fraud. He didn’t dig Truffaut’s Jules et Jim because he didn’t dig the chick (Jeanne Moreau).  He is bowled over by Akira Kurosawa (if anyone wants to know Tarantino’s rating of the best Kurosawas, it’s in the book) and loves the other Japanese samurai films. Cliff discusses a little-known erotic movie by Swedish dir­ector Vilgot Sjoman called I Am Curious (Yellow) in great detail, over six pages. There is his take on almost all the Hollywood actors of that era, particularly the Western stars of that time, both in films and TV serials.

The novel reveals how much a filmmaker has to leave out— character sketches, back stories, local folklores..... In the book, even Cliff’s pet pit bull Brandy gets a full chapter.

What’s great fun to do is to read a chapter from the book and then watch the scene from the film (I have a DVD, it must be on OTT too). Tarantino’s genius for visual treatment of a scene, the camera angle and movement, the music, the dialogue, what he gets out of his actors are mesmerising. It also shows how much he prepares for a scene, and how little he can use in the end. Those who have seen the film will remember the sequence of a lunch-break chat between Rick Dalton (playing the heavy Caleb in a TV Western, complete with a drooping moustache, unkempt hair and dusty clothes) and the precocious child actor who plays Mirabella, on the sets. The little girl is primly perched on her actor’s chair with her name, Trudi Fraser, on it, a heavy hardbound biography of Walt Disney on her lap. She doesn’t raise her eyes from the book when Dalton plonks himself next to her, a little paperback in his hands.

As Rick tries to make small talk with her, she says her name is Mirabella, the character she plays. “No, no, I mean, what’s your real name?” Rick asks. “When we are on set, I would prefer to only be ref­erred to by my character’s name. It helps me invest in the reality of the story”, she replies in a tutor­ial-like manner. This scene is less than five minutes in the movie. In the book Trudi Fraser (who is apparently based on Jodie Foster) goes on to become a popular star, gets three Oscar nominations, including, in a meta moment, for a Quentin Tarantino film. The book ends with the child actor having a long midnight chat with a drunk Dalton, who is trying to rehearse his lines for the morning shoot.

Curiously, the book skips the two quintessential Tarantino ‘violence-as-fun’ set pieces of the film—when Cliff leaves George Spahn Ranch, a member of the family, a hippie with long hair and crooked teeth, has stuck a knife in his car’s tyre. Cliff gives him the treatment, yanking him by the hair, sma­shing his face and makes him change the tyre. This and the climax of the film, when three Manson Family members get into Dalton’s house where he and Cliff have been drinking beer, and all of them meet with varying degrees of violent death.

It was all happening in 1969 Hollywood. As the book’s blurb says, you shoulda been there. But Tarantino’s film, and now book, lets us savour those times, however fleetingly.