Siddaramaiah is sure about retaining power, banking on an array of welfare projects 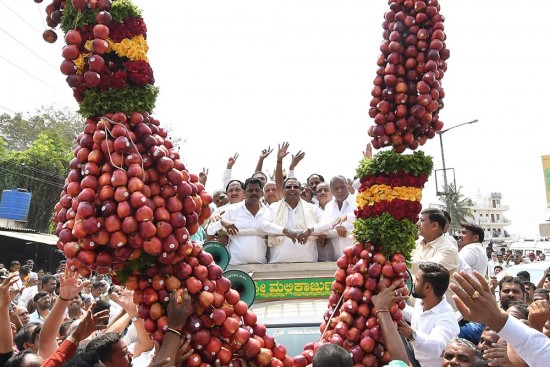 Along the narrow village street of Daripura, a small crowd winds its way to a chavadi, a raised stone platform with thatched roof that offers resp­ite from a sweaty Mysore morning. Then, after genuflecting before a photograph of the venerable seer Shivakumara Swamy, Karnataka chief minister Siddaramaiah steps back onto the street, where he is handed a mike. It’s after 12 years that he is standing for elections from Chamundeshwari, an assembly seat hugging the south-eastern fringe of the sandalwood city. He reminds people about a ‘tough fight’ back in the December 2006 byelection and how they stood by him even when the Janata Dal (Secular) and BJP had joined forces to “finish me off”.

That bypoll, which Siddaramaiah scraped through by a margin of 257 votes, is now a milestone in Karnataka’s politics. Not just because it was fought tooth-and-nail between former friends, but it han­ded Siddaramaiah a second political innings: the ‘rebirth’ of a dyed-in-the-wool Janata Dal leader as a Congressman. Now, after five years as CM, Siddaramaiah is leading his party into another tough election and, while he’s at it, forcing rivals to react than set the tone.