Kuchibhotla had to die, but white supremacists have a new foe: other vocal Americans 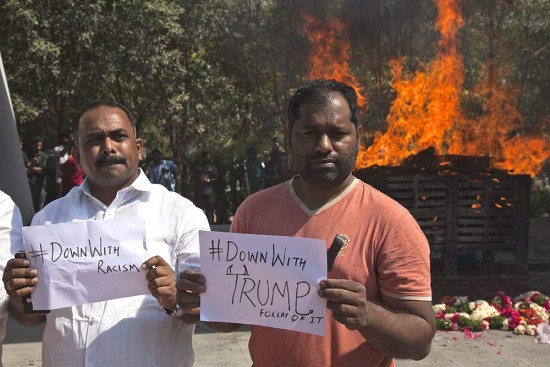 A giant heart in gaudy pink, radiating silver blue rays, thr­obbed vigorously on the scr­een behind. Two young cou­­­­ples, dressed in black, danced suggestively to a soft melody on the dimly-lit stage. But the music was suddenly disrupted by shouting and sounds of gunshot. A couple of terrorists, cloaked in green burqas and carrying glow-in-the-dark plastic guns, jumped on to the stage—firing in the air and forcing the hapless foursome into a huddle. They hollered in Arabic and guffawed like villains from bad movies. But before long, a group of spr­ightly American Rangers came out of nowhere and kicked their asses with Chuck Norris moves, saving the day. The bemused audience clapped in appreciation.

Mid-October evenings aren’t terribly cold in Edison, New Jersey and so the 2,000-odd Indians who had gathered for the ‘Hindus for Trump’ gala—setting of the above show—could display their emb­roidered salwars and colourful churidaars. Many were Telugus, and they hadn’t come there as much for the politics as for watching Prabhu Deva. Malaika Arora Khan was another big draw. But the biggest name on the ticket was The Donald himself. Three weeks before the presidential election, in the middle of the campaign of his life, he came. He saw. And he conquered with these words: “I am a big fan of Hindu, and I am a big fan of India—Big, big fan.”