JD(S)-Congress set-up is under strain, while the BJP waits in the wings 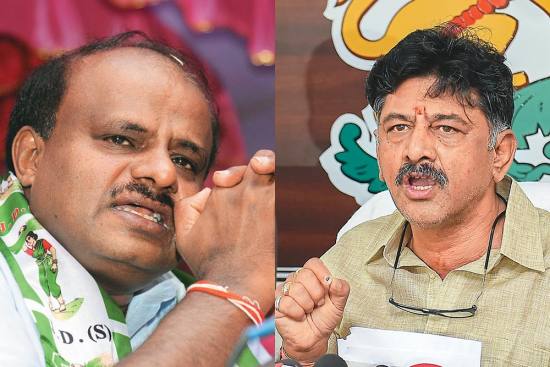 The battle of wits was expected to lead up to a duel. But after two weeks of commotion, the H.D. Kumaraswamy-led coalit­ion in Karnataka won a respite, and a walkover of sorts. Before the BJP backed out of a contest desp­ite wan­ting the confusion in the JD(S)-­Congress coalition’s ranks to fester, the ruling combine seemed headed tow­ards more discomfort in early ­October when the legislative ass­embly votes for three seats in the legislative council, the upper house.

There was plenty of din all through September: a bitter exchange between Kumaraswamy and the BJP state president B.S. Yeddyurappa over the Oppo­sition’s alleged attempts to topple his government, which had the CM threatening to release audio recordings of BJP leaders making offers to legislators for defection. If the BJP were to contest the legislative council polls, it would have had to get rival MLAs to cross-vote in its fav­our as it is short of eight votes to put up its own candidate. The JD(S)-Congress coalition has the support of 117 legislators (including two from small parties and an independent) in the current ass­embly of 222 members (two seats are vacant), while the BJP has 104.