At the Park Street-Middleton Row corner, speckled with iconic establishments, infected with old joie de vivre, one can sense a ‘modern’ past feeling for the future. In Calcutta. 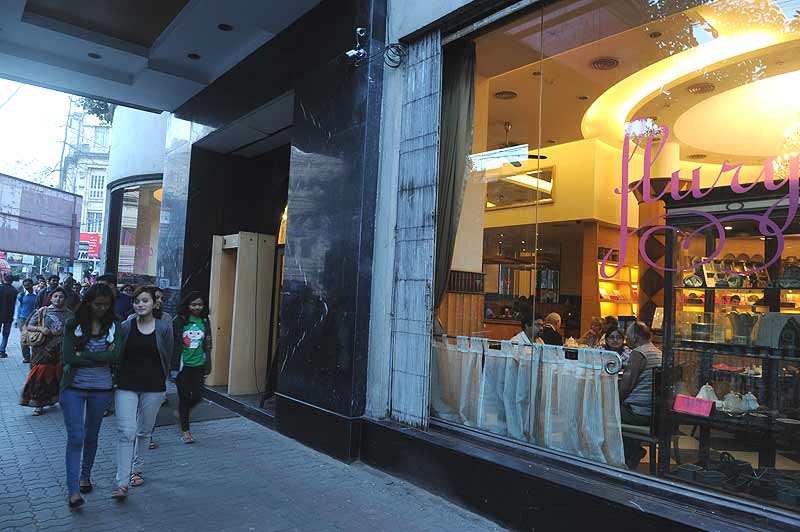 Ramayan Shah has a pavement stall selling food on Free School Street in front of a sign that says Sarabhai Chemicals. The building behind him is Karnani Mansions, and the look of the sign suggests superannuation, an office boarded up. Ramayan Shah and two other low-level entrepreneurs—the always-absent owner of Chandan Hotel, which roughly occupies six by six feet on the pavement, and Nagendra, with his heavy iron and board—have appropriated the terrain here.

I can remember a time when these businesses didn’t exist in this location, and one could walk from Park Street up Free School Street without any interruption. At a glance, the stalls are squalid, a small universe of cooking pots, potato peels, benches, and a few people absently lolling under the shelter of tarpaulin. They comprise an island with no apparent connection to the Free School Street of the seventies and early eighties, with its rare second-hand vinyl records and its second-hand bookshops, which even now sell everything from horoscopes to Leon Uris to Salman Rushdie to old copies of Time. In 1982, before leaving for England, suddenly disenchanted by Western popular music, I remember bringing with me from Bombay some of the priceless records in my collection (among them Janis Joplin Live), to either distribute gratis among friends who were still under the spell of that music or permit the more mercantile among them to sell the records to the vendors on Free School Street. One of my friends earned six hundred rupees from the sale (some of these records were rare, bought in a London Our Price shop by my father), a small fortune at the time. I took nothing of the proceeds, a measure of my new high-minded propensities. It was a way of washing my hands, with violent symbolism, of my Western music past. Yet how alive Free School Street was, still busy with transactions between bourgeois and punter, coursing with some of the sensuousness of the seventies! The secondhand bookshops are still there, as are the vendors of the vinyl  records, but it isn’t clear who the customers are. There’s more activity in the recent Bangladeshi restaurants, and in the small shady foreign exchange outlets at which Bangladeshi tourists can quickly change takas into rupees.