Four Shades Of Irony, One Of Fury

The Purusha Sukta glibly drops the four varnas on Hindus. Lit by a holy rage and unwavering in scholarship, Ambedkar exploded the very purity of the chaturvarna. 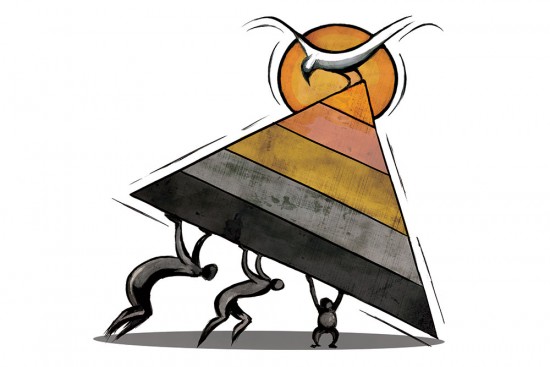 The Mallik brothers, Jagmohan and Harimohan, are as different in temperament as day is with evening. The elder, Jagmohan, is a rationalist, a past master in the art of disputation. The younger brother, Harimohan, is a devout soul, faultless in his services to the cow and the Brahmin. While the latter indiscriminately pays obeisance to the gods, the former only acknowledges what he terms the sajib or the ‘full-of-life’. To counter Harimohan’s fervour for set rituals and daily recital of scriptures, Jagmohan, in line with his idea of the sajib, regularly hosts meals for the ‘animated’ in the shape of Muslims and unto­uchable Chamars. And then, in order to neutralise the sins incurred by his elder brother’s unheard-of effrontery, Harimohan feels compelled to organise elaborate feasts for Brahm­INS, and Brahmins alone. Sick and tired of the endless cycle of defilement and pur­­ification, the younger brother at one point app­roaches the precincts of (colonial) law. Harimohan pleads that because of his despicable predilections, Jagmohan has forfeited the right to con­­tinue as a trustee of the Mallik devatra property. To get the judgment in his favour, Harimohan does not need to resort to bribes or other such dubious means. For, although an elite-caste Bengali by birth, Jagmohan has no compunction in declaring in court that he does not believe in gods, has no respect for tab­oos surrounding diet, has no obj­ection to dining with Muslims, and, of all things, he does not know from which part of Brahma’s body Muslims have sprung. Following this candid testimonial, the district judge faces no legal obstacle in releasing Jagmohan from the responsibilities of the ‘sacrosanct’ property’s trusteeship.