From Wagah To Attari, Only 22 Yards

Intense cricketing rivalry can make for good matches. But India and Pakistan paint it over with politics. 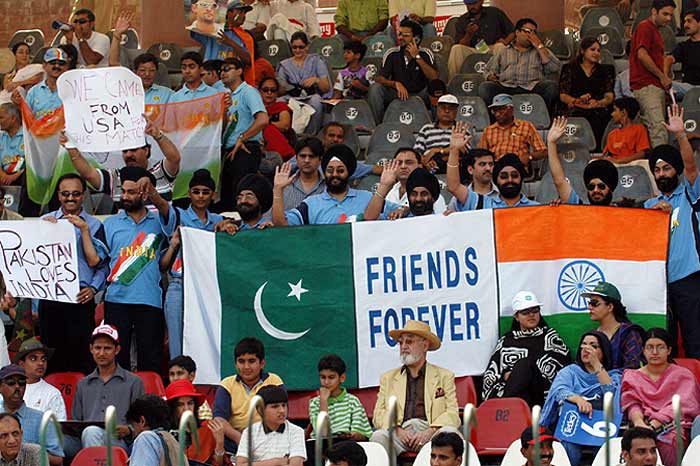 When When I was a schoolchild, and frequently home alone bedridden with asthma, one of my favoured activities was to construct imaginary cricket teams for the solitary pastime known as “book cricket”. This was a game in which players battled for victory on paper, their scores determined by the page numbers revealed through the brisk and random opening of a fat book. Of the many imaginary teams I created over the years of my childhood, my favourite was a team concocted out of a wholly impossible premise – that the Partition of 1947 had never occurred, and that the best players from what was now Pakistan could turn out, as their forerunners had once done, for a united India.

What joy there was in inventing such a combined team! The legendary Indian spin quartet of the early 1970s bolstered, as they could never be in real life, by fearsome Pakistani pacemen; the solidity of Sunil Gavaskar paired with the silken elegance of Zaheer Abbas; and two of the world’s best all-rounders, Mushtaq Mohammed and Imran Khan, bowling and batting in tandem with their Indian equivalents, Salim Durrani and M.L. Jaisimha! This would have been the best team in the world, and of all the tragic losses brought about by Partition – which sundered a country, took a million lives, displaced 13 million people, and destroyed billions of rupees worth of property – the one that my schoolboy heart felt was never properly valued, was the terrible blow it struck to the prospects of what would have been the strongest cricketing country on the planet.

Of course such dreams were idle, and part of their poignancy lay in knowing how impossible their realization was. When, in those days, India and Pakistan each lost series to England, Australia or the West Indies, there was little consolation in reflecting that a combined India-Pakistan team could have better held its own, in particular against the old colonial oppressor. This was even truer of the subcontinental teams that toured England in 1971, but even contemplating the prospect then involved recognizing that not only would the two countries never field a combined team again, but that they were on the brink of a real shooting war (which duly erupted a few months after the English cricket season concluded, and was to result in the birth of Bangladesh).

Yet, amazingly enough, my fantasy came blissfully true just once – a quarter of a century later. In 1996, India, Pakistan and Sri Lanka jointly hosted the World Cup tournament, but some countries, afraid of violence on the civil-war-torn island, refused to play their matches in Sri Lanka, depriving the Sri Lankan public of cricket and their Board of much-needed revenue. In response, India and Pakistan sent a combined team to play one match in Sri Lanka against the hosts, an act of subcontinental solidarity that gladdened every cricket-lover’s heart. The match was a huge success; the combined team, playing under the name of its commercial sponsors as the “Wills XI”, comfortably thrashed the future World Cup champions, with 33 balls to spare in a 40-over match; and all my schoolboy assumptions came true, albeit with a later generation of names. Pakistan provided both the pacemen (Wasim Akram and Waqar Younis), India both the spinners (Anil Kumble and Ashish Kapoor); the two brilliant openers were India’s Sachin Tendulkar and Pakistan’s Saeed Anwar, both record-breakers in one-day cricket; the wicket-keeper (Rashid Latif) was Pakistani and the captain (Mohammed Azharuddin) was Indian. The newly-minted captain of Pakistan, Wasim Akram, cheerfully played under his Indian counterpart, and the veteran former Pakistani skipper, Intikhab Alam, managed the combined side. The final team featured six Pakistanis and five Indians, which was probably a fair reflection of the two countries’ cricketing strengths at the time, and the man-of-the-match award was won by the Indian spinner Anil Kumble for his 4 wickets for 12 runs. What made the match all the more remarkable – apart from the miracle that such a team was fielded at all – was the painful fact that India and Pakistan had not played each other at all on the cricket fields of either country for the seven previous years. 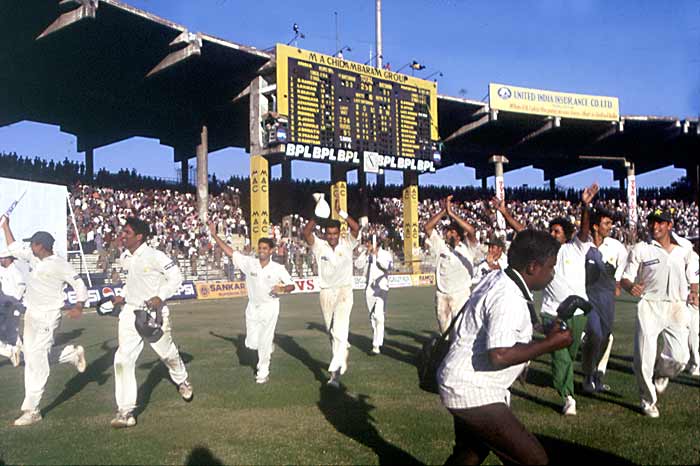 Field’s ours Pakistan takes a victory lap to warm applause after the first Test against India in Chennai in 1999. (Photograph by Atul Loke)

The question of whether, amidst all the strife that besets the two countries’ bilateral relations, a mere sport can bring them together, is at one level easy to answer: no. Sport can sublimate many emotions, but it cannot be a substitute for geopolitics. Cricket can be an instrument for diplomacy, not an alternative to it.