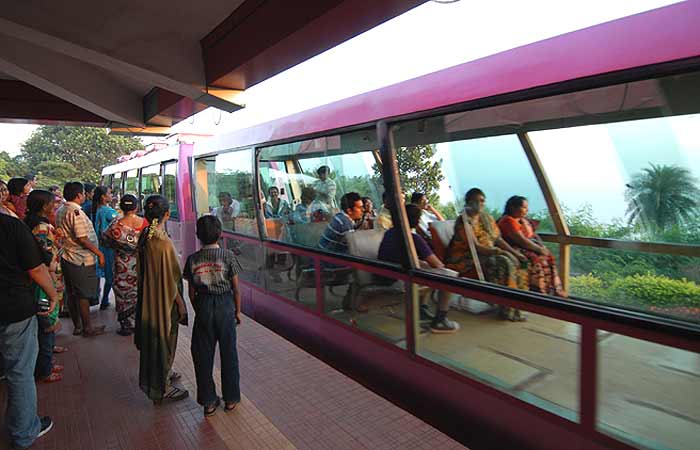 Welcome to City of Destiny’, proclaim the billboards at the recently opened Visakhapatnam airport. But outside, in the city wedged between the Eastern Ghats and a spectacularly long, golden beach, there is an air of expectancy, as if its promised destiny is still round the corner. Multi-storey apartments sprout incongruously among banana groves, villages around the city are agog with promise, optimistically brandishing ‘flats/sites for sale’ signs; flyovers raise half-built wings to the sky; and even the pride of the port city, its three IT SEZs sprawled over the ancient hills, appear like ghost cities, dark and deserted. As for the glass-fronted malls and multiplexes coming up along Beach Road, they are still woefully short of crowds.

But there is one sign of the future that everyone here is anticipating for this fastest-growing city in the country: an evening rush hour. For the last couple of years, from 7 pm to 10 pm, herds of buffaloes, tractors, trucks carrying iron rods, white Honda Citys rigged out in bouquets of roses, auto-rickshaws, petrol tankers, Audis, Volkswagens, Skodas, bikers, cyclists and hundreds of schoolchildren returning home from the city’s famed cramming schools spill out on the main artery that connects the expectant suburbs to an old town that has been waiting for its destiny for more than a century now.

“Visakhapatnam has a beautiful future,” explains a senior government official, S. Satyanarayana, uncannily echoing the words of the British dam builder, General Sir Arthur Thomas Cotton, who prepared the earliest design for the Visakhapatnam port nearly 200 years ago, declaring the little fishing town with its natural harbour as “the city of the future”.

I was going back to Vizag—the British corruption of Visakhapatnam that we used to call it then—after almost 45 years, afraid that everything would have changed beyond recognition. I tried to adjust my memory of the little town, the convent boarding school, the only one for girls at that time, the Sunday walks to the deserted beach, the birthday cakes from the bakery in the single row of shops in the town and the green hills beyond, with what the official was telling me: six SEZs, 20,000 acres acquired for industrial parks, two ports, two universities, 25 engineering colleges, three medical colleges, five pharmaceutical colleges.... “It is already the first among the second-rung cities of the country, and by 2020 it will become the most crucial city in India,” the official concludes.

I’m not the only one, it turns out, who has trouble believing in this great future for the city. Even the real estate barons who made a killing when land prices soared to undreamt-of heights are sceptical. As one of them, J. Vijay Shankar, MD, Aiswarya Developers, puts it, “Visakhapatnam has always been a city of over-imagined opportunity.” The steel plant was expected to give a big boost to the city, Shankar points out, “but did not”. Predominantly a city of central government undertakings until the ’90s, “you can tell that this is a city of salaried employees by seeing how market sales drop dramatically between the beginning and end of the month.” The next Big Hope came when the government announced the SEZs in the early ’90s, with authorities drawing up an ambitious master plan for the city, now divided into 17 satellite towns. “There was so much demand for house plots at that time that the government had to hold lotteries. Luxury apartments and homes came up, selling for over a crore, more than what prime property in the state capital Hyderabad was fetching,” says Shankar. In the wild hills of Madhurwada and Rushikonda alone, where the IT SEZs were planned, at least 40 apartment complexes came up recently, many of them yet to be occupied. Property prices peaked just before the great crash two years ago, but are slowly climbing up again. But this, according to realtors like Shankar, has less to do with economic activity in the city than a rising hope that if Hyderabad is claimed by the proposed Telangana state, then Visakhapatnam’s destiny as a metro city is assured. “Not much has happened either in the Pharma City or the other SEZs,” Shankar says.

The figures seem to bear him out: in the Jawaharlal Nehru Pharma City, for example, where the Andhra Pradesh Industrial Infrastructure Corporation or APIIC acquired 2,143 acres in Paravada, 36 km south of the town, to develop a park for manufacturing bulk drugs and chemicals, only 26 of the over 100 units developed have started production so far. Similarly, the SEZ industrial park in Atchutapuram, where the government acquired a record 9,287 acres from local farmers, has generated only 5,691 jobs. Officials blame the recession and the more stringent environmental rules to explain why the Pharma City hasn’t quite taken off as they had expected. But nothing can stop the rapid growth of industry here, claims the commercial head of the pharma park, Srinivas Adavi. “Last year, our turnover was Rs 3,000 crore, and by 2014 we expect it to go up to Rs 10,000 crore.”

It’s an expectation that fills the former bureaucrat, E.A.S. Sarma, with increasing dread. Since Sarma moved to Vizag over six years ago—four years after he quit his job as Economic Affairs Secretary with the central government—he has made it his business to ensure that the industries and mining companies flocking to Visakhapatnam don’t violate the law. Leading industrialists and politicians from the city have all tried without success to coax him into relenting to industrial and mining interests. Among the legal battles his NGO, Forum for Better Visakha, has fought are the indiscriminate auction of the hills surrounding the city, industries expanding into archaeological sites dating to 2nd century BC, violations of the coastal regulatory zone, violation of building rules by multi-storey hospitals (there are at least a dozen major private ones) and flouting of safety and parking rules by housing complexes.

But Sarma’s main fight has been against the pollution by drug companies and the power plant (which, incidentally, was sanctioned by him when he was at the Centre because he thought “a government-run power plant would set the model for others”). Despite the Pharma City’s claims of running a state-of-the-art plant to treat its effluents before dumping them in the sea, Sarma says the drug manufacturers are quietly dumping their waste in the hills and reservoirs around the city, leading to groundwater pollution.