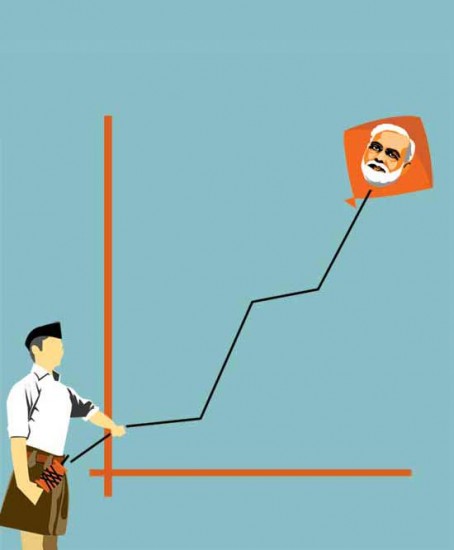 Last week brought big relief to Narendra Modi’s detractors in the BJP and RSS. The persistent hype that the PM hopeful will stage a sort of policy coup d’etat at an investors’ meet in Delhi went phut. The much-expected economic ‘vision document’ he was to unveil to world honchos and G-20 ambassadors finally turned out to be a bland copycat version of the Manmohan Singh policies, and safely within the BJP’s official line. The only icing he put on it was a vow to implement them vigorously as a ‘doer’.

Inspired reports that Modi was daring to overshoot the party’s official economic policy frame had lent a new dim­en­sion to the ongoing cold war between the two sides. The scare had reached Nagpur old guard, who do not tolerate such unilateral actions, especi­ally when the preparation of the BJP manife­sto itself is at a critical stage, and delayed by pulls and pressu­res. Modi’s climbdown, after a for­tnight-long build-up on a parallel vis­ion document, reflects his unwillingness for a face-off with the hierarchy, at least for now. It also speaks of policy conflicts on a range of economic postures from subsidies to FDI in retail.