‘I Can’t Be A Mute Spectator To KCR’s Misrule’ 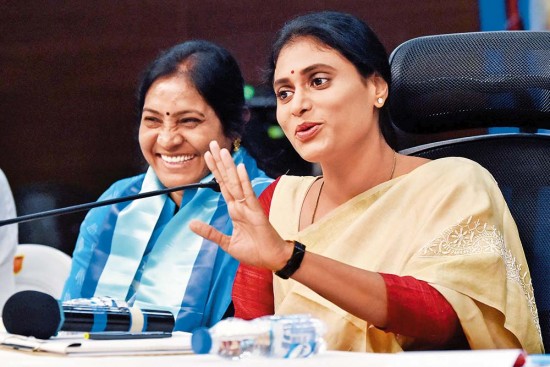 Y.S. Sharmila, daughter of the late Congress leader and former Andhra Pradesh chief minister Y.S. Rajasekhara Reddy, and sister of Andhra CM Jagan Mohan Reddy, has floated a new party—the YSR Congress Telangana—to take on Telangana CM K. Chandrashekar Rao’s Telangana Rashtra Samiti. ­Political analysts feel her party may be a non-starter as she is considered a “rank outsider”, but she tells M.S. Shanker that her party will storm to power in the 2023 assembly polls. Excerpts from the interview:

What prompted you to launch a party in Telangana?

I don’t want to be a mute spectator to KCR’s anti-people administration. His party came to power way back in 2014 purely on regional sentiments. People were swayed by the TRS and KCR’s false promises of resolving the massive unemployment problem, preventing farmers’ suicides, providing two-­bedroom houses to the poor, doing ­justice to women and ensuring their rights. During his seven-year rule, as many as 7,000 farmers committed ­suicide, 54 lakh unemployed youth were left in the lurch, Opposition MLAs were bought like sheep and women were not given their due. My father taught me not to be a bystander if injustice is meted out to anyone and I decided to fight their battle against KCR’s misrule.

Some say you are a rank outsider in Telangana.…

How dare anyone give me the ‘rank outsider’ tag? I was born and brought up here in Hyderabad. I did my ­schooling here and my college ­education too. I even got married to a Hyderabadi man. I am as much a ­Telanganite as any other person, including KCR. Moreover, the amount of work that has been done by my late father, even KCR cannot ever dream of doing in his lifetime. My father ­continues to live in the hearts of ­everyone here. He is a rare people’s leader, who all through his life only strived for the welfare of the state as well as of the weaker sections of ­society. And they want to bring back ‘Rajanna Rajyam’ in Telangana.

Do you feel goodwill for your father still exists in Telangana?

Of course, people still adore my father and cherish his benevolence. I get that feeling in the wake of thousands of people turning up for my meeting and cheering every time I refer to ‘Rajanna Rajyam’. Congress lost its plot when the leadership chose to name Revanth Reddy as PCC chief. He was caught red handed in ‘note for vote’ scam. The BJP has no credibility. After its emphatic win in the Dubbak bypoll, the pathetic performance of that party in the elections that followed—the Nagarjunsagar assembly bypoll and civic polls in major towns—indicates it has no future.

Did your differences with your brother Jagan Mohan Reddy force you to launch your own outfit?

Do you expect some support from your brother?

I don’t rely on anyone except my father’s legacy. That’s it!

Will your party have an alliance with others or go solo in the next assembly polls?

We need support from none. The entire Opposition lost credibility when they chose to remain puppets in the hands of KCR. I can confidently say that my party is bound to emerge victorious in the next polls with the blessings of the people.