In a human-centric world, is Ranthambore’s T24 doing a Charlie? 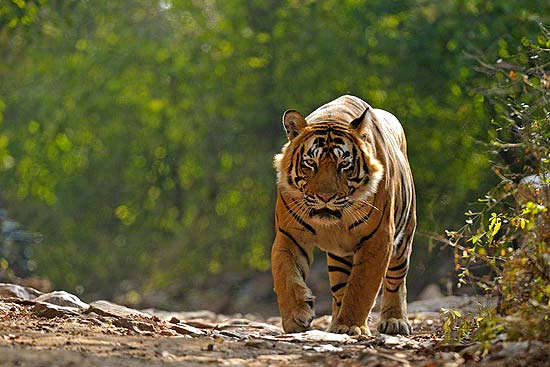 What’s common to Charlie Hebdo and a tiger—in this case Ustad, or T24? Freedom, of course—that old canard, freedom of speech, on one side and freedom to eat, to put it baldly, on the other. Freedom is possibly the most wildly celebrated cause in the world, the one word guaranteed to ensure no further examination of the matter under debate. Charlie Hebdo flaunted freedom of speech to the extent that its editor and his team became martyrs to the cause. And Ustad? Tigers have their own sense of entitlement and superiority—without it they wouldn’t be the splendid beasts that they are. Of course, unlike Charlie Hebdo, Ustad was not aware that he was trespassing—or perhaps he was. He’d lived under the observation of strange two-legged beings for years. Some kind of monkey they were, who chattered and jabbered whenever they saw him and showed every sign of being unafraid, wounding to an alpha tiger’s ego.

Discussing the two puts me bet­ween two odd stools—as a writer of five books who should avow freedom of speech as a birthright and as a reluctant wildlife ‘expert’ who started delving into tiger issues after a book involving Jim Corbett’s ghost and a tiger on the run. (If I’ve had no striped encounters of the third kind, I do have a stream of FB posts on the tiger!)