If The Earth Stayed Still

People still live out in the open, relief pours in but efforts on the ground are still a jumble as Kathmandu struggles to get back on its feet 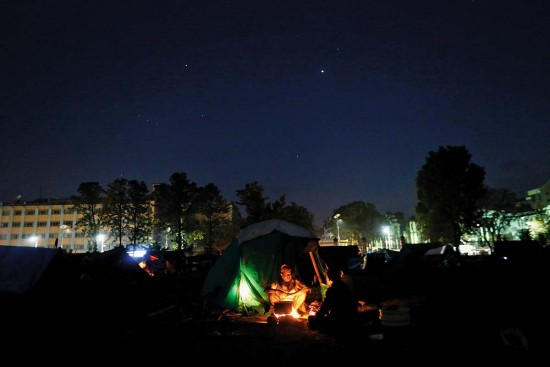 Pilot Gaurav Bohara was about to take off from Chandragadi airport, near the southeastern border of Nepal, when the ground started heaving. “It was as if I was standing on still water and there were waves beneath my feet. It took a while for it to sink in that it was an earthquake. I had no option but to fly out immediately or else all of us would have got stranded there. The air seemed safer,” says Bohara. But he could not land the light atr 72 craft at the Tribhuvan airport because the air traffic controllers had deserted their post and clambered down to the ground floor to save themselves. A friend piloting a private chopper for aerial surveys helped him land safely.

Footage from CCTV cameras in Kathmandu show roads suddenly starting to shake and buildings and monuments crumbling down. Electricity poles were felled like wild flowers in a storm and roads split apart as if they were slices of cake being torn apart by an invisible, giant hand. People indoor hung on to walls and metal grills, many of which collapsed in no time.