I’m A Politiculturist Who Wants To Challenge The Status Quo: Kamal Haasan

Kamal Haasan is trying to be a new force in Tamil Nadu, combining his intellect, popularity and charisma in an attempt to change the political culture of a state hit by waves of corruption and larger-than-life leaders. 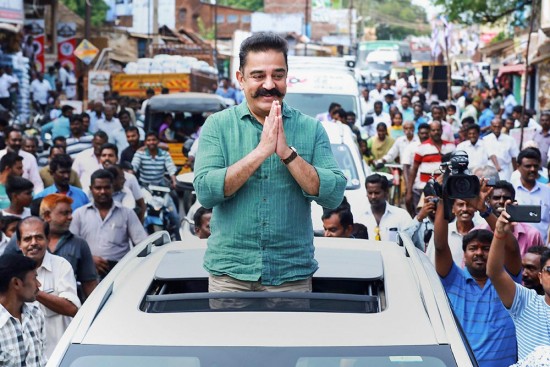 Keeping true to Tamil Nadu’s pec­uliar political history, movie stars Kamalahaasan and Rajnikanth ann­ounced their entry into politics a while back. The void created by former chief minister J. Jayalalitha’s death and the virtual absence of her rival, the 94-year-old M. Karunanidhi of the DMK, perhaps pushed the stars to make their move now. Rajnikanth appears to have no plans to contest Lok Sabha elections next year and is yet to launch a party. But Kamal, who launched his Makkal Needhi Maiam (People’s Justice Centre) last February, is trying to be a new force in the state, combining his intellect, popularity and charisma in an attempt to change the political culture of a state hit by waves of corruption and larger-than-life leaders.  It seems that he wants to change everything—from a ‘Thalaivar’-oriented personality cult trend to the way elections are funded. He also wants to avoid a ­culture of freebies through a new-age model. The well-read Kamal sees himself as an outlier, like Spartacus, who is out to challenge the status quo with a new system in mind.

He spoke to Madhavan Narayanan on his desire to usher in a new kind of centrist politics in the state as a constituent of an emerging non-Congress, non-BJP front and how he wants to achieve this desire. Excerpts from the interview: