They say Cheristerfield Thangkhiew, 54, was mediating with the regime. Why was he killed then? No one believes the police version among the Khasi-Jaintias…the black flags are out. 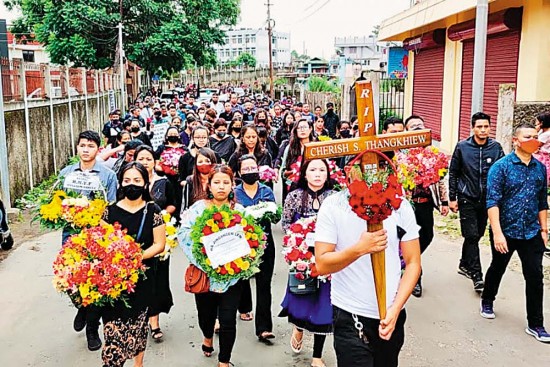 The police shooting of a former militant leader in Meghalaya spiralled into a maelstrom of public protests, political upheaval and sporadic violence in the northeastern state, and Independence Day saw black flags dotting the skyline along with the tricolour in capital Shillong. Curfew was clamped in the picture-postcard hill station and mobile internet ­services were blocked before the home minister sent in his resignation to ensure a “free and fair” probe into the killing of Cheristerfield Thangkhiew, 54, (in pic) a former self-styled ­general secretary of the militant Hynniewtrep National Liberation Council (HNLC) at his home in the early hours of August 13.

Police claim the former militant was involved in recent bombings, including one in Shillong on August 10, and had raided his house to arrest him ahead of another planned bomb attack. Thangkhiew had allegedly attacked the raiding team with a knife, forcing police to fire in self-defence. But his family members say he was ailing and did not have the strength to walk and wield a knife against a group of armed policemen.

In the Northeast, where several militant outfits have been active for decades, killing of one cadre hardly makes any news. But Thangkhiew’s death touched a raw nerve in Shillong as people refused to buy the police version of the circumstances leading to his death. Protests started building up to culminate in the series of events on the day of his funeral on August 15. A group of unidentified protesters took away a police SUV along with weapons kept inside and drove it through the city, brandishing those firearms before setting the vehicle on fire.

What apparently riled the people even more was an HNLC leader’s statement that Thangkhiew was acting as a mediator between the outfit and the government for starting peace negotiations. HNLC general secretary Sainkupar Nongtraw said a letter was sent by the outfit to government agencies “through Thangkhiew”.

The HNLC, the last active militant outfit in the state, claims to be fighting for the indigenous Khasi and Jaintia tribes, and to protect them from what the outfit describes as attempts of economic and social domination by “outsiders”. The Khasis and Jaintias are collectively known as the Hynniewtrep.

The HNLC was formed in 1996 after a split in the state’s first militant organisation, the Hynniewtrep Achik Liberation Council, founded in 1992. The other splinter group, Achik Matgrik Liberation Army, went into obscurity and some of its leaders formed the Achik National Volunteers Council (ANVC), but it too disintegrated over the years. Another group, which shot into prominence in 2009, was the Garo National Liberation Army. It demanded a “sovereign country” for the Garos, the other major tribe of the state. It too faded away.

For the record, Meghalaya was ranked seventh in the country on police shooting deaths between 2014-15 and 2018-19. At least 1,073 people were killed during the period, data from the National Human Rights Commission shows.

In an indictment of police, home minister Lahkmen Rymbui said in his resignation letter that the raiding party had exceeded the “lawful tenets of the law”. The BJP, part of the ruling alliance, also condemned the “Taliban attitude” of the government. Chief minister Conrad Sangma made a semblance of defence of the police, saying there was no ­intention to kill and what happened was “unfortunate.” The killing has yet again opened rifts in the ruling alliance led by Sangma’s National People’s Party.

(This appeared in the print edition as "Old Wounds Open Up")