A Union Of Opposites

After downgrading the definition of Centre, Stalin meets PM with shop list 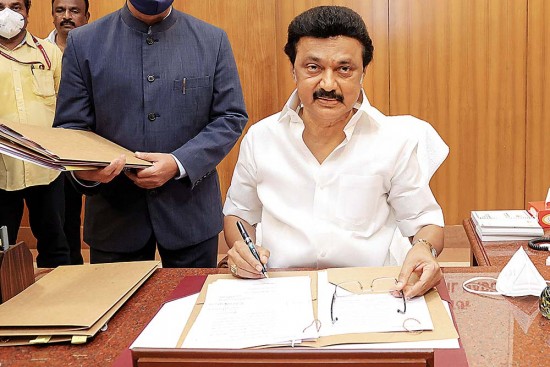 All new chief ministers carry a shopping cart to the prime minister after assuming office. Chief minister M.K. Stalin too had an itemised list for Tamil Nadu during his meeting with PM Narendra Modi—more Covid vaccines, payment of GST dues, central allocation for development schemes, scrapping of NEET.... And yet, Stalin’s government has sought to diminish the status of the Centre by a clever play of words. DMK leaders, including its ministers, are describing the Centre as “Ondriya Arasu” and not as “Maddhiya Arasu” or “Naduvan Arasu” as it used to be referred to in Tamil in the past. Many Tamil news channels have taken the cue and are using that expression. DMK leaders sought to justify the change, saying the correct expression should be “Ondriya Arasu” since the Tamil equivalent of Union is “Ondriyam”. But by doing so, the DMK has sought to equate the Centre with a Panchayat Union. In Tamil Nadu, the word “Ondriyam” is associated with Panchayat Union.

This reclassification occurred after the outburst of state finance minister Palanivel Thiagarajan after his GST Council meet when he had objected to big states such as Tamil Nadu being treated on a par with smaller ones like Goa and Manipur. He reminded the Centre that it cannot dilute the federal nature of the Constitution as India was only a Union of States and the government in Delhi was merely a presiding entity. And in his Tamil statement he dubbed the Centre as “Ondriya Arasu”, moving between an angry attack and a mocking tone.