AFSPA And The Violence It Produces: Is It Time For Its Repeal?

AFSPA was supposed to be a 'temporary measure'. But it has survived till date. In that, it’s an exception that has been normalised and become a norm. 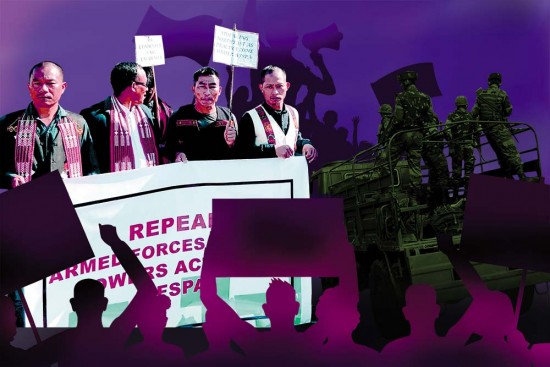 The recent bloodshed at Oting, Nagaland, is an ominous reminder of the unbridled violence that has vulgarised the State’s claim over “legitimate use of physical force”. We all know that the capacity to exercise violence is at the heart of the State as an institution. It is something that enables it to sustain itself. Police, as an instrument to “preserve order”, exercises that force. We encounter it in our quotidian world—from fighting crimes to regulating traffic or controlling crowds and maintaining order, it exercises that power to restrain and discipline. But none embodies the ultimate expressions of that corporal might of the State as the military does. As a war machine, it is specifically trained and maintained to destroy and kill. Since the military has that vital capability to use physical violence, it can also institute and/or re-institute the State itself. Military coup or coup d’état is a reminder of that potential. That is why, the military as an “apolitical” institution is not only idealised but it is also restricted from involvement in the internal affairs of the State.

The adage, “Julius Caesar crossing the Rubicon in 49 BC was the beginning of the end of the Roman Republic” is a historical signpost that speaks of how the military could transform the very character of the State. Incidentally, Gandhi knew of this intimate connection between violence and the State, and the military as its embodiment. Thus, “India of my dreams”, he said, would be a country with the “smallest army imaginable”. Yet, not only does India maintain one of the largest military forces in the world today, but in defiance of the traditions of keeping the military away from involving in the domestic politics and affairs, the Indian State crossed its own Rubicon way back in 1958 when it specifically enacted the notorious Armed Forces (Special Powers) Act—popularly called AFSPA—for India’s Northeast. This was followed by two versions of the same in 1983 (for Chandigarh and Punjab) and 1990 (for J&K).