And They Loved Dearly

Rarely has a marriage been so tragically entwined with politics. Prison, calumny…they faced it all. But history was unkind. Gouri Amma, mostly in her own words, about her 'TV'. 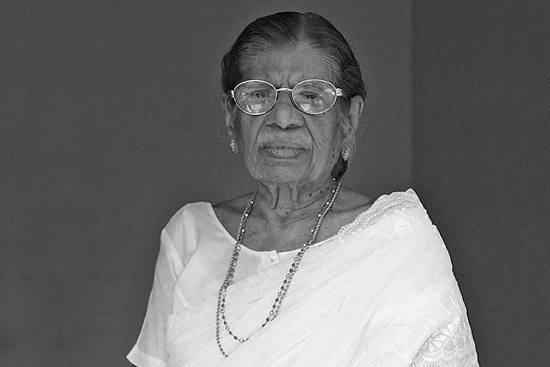 My husband came home one evening and said excitedly that he was taking me to watch a play. He had also bought me a white silk sari—he loved white—and flowers for my hair. This was the first time he had done so. I felt so happy that I said, yes, let’s go. K.R. Gouri Amma was to recall that evening with fondness later. In the early 1960s, when Gouri went with T.V. Thomas for a Malayalam play, they were greeted with clapping and cheering from the audience. Clad in the sari he had gifted her that very day and with jasmines in her hair, she stood next to her young husband, just another woman in love. A decade later, that portrait of a happily married couple had been shattered, but the love that the two shared endured, kept alive by Gouri for over four decades even after T.V.’s death.

Gouri succumbed to age-related complications on May 11, two months shy of her 103rd birthday. In the twilight of an ext­raordinary life that saw her break many a glass ceiling in the vastly patriarchal pantheon of politics, Kerala’s Iron Lady—the architect of land reforms, the Communist icon who rebelled against her party at the age of 74—had, perhaps, had a lot of time to excogitate the steep personal cost she paid for her illustrious political journey. More so, perhaps, because that journey, at least in popular imagination, never ended at the destination that her followers, if not Gouri herself, believed was ordained for her. A popular legislator and minister of many terms in her state’s cyclical Communist governments, Gouri was, after all, the chief minister that Kerala never had.