The Parliament nod to Citizenship Amendment Bill has raised questions about secularism. Are politicians sacrificing the state's interest at the altar of Hindutva politics? 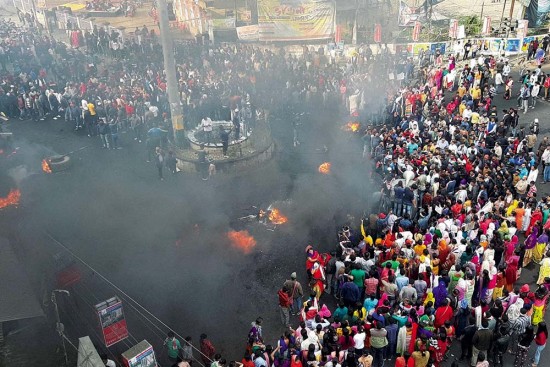 A line stretches out from Assam and wraps itself around India, like a new Tropic of Cancer or an invisible Radcliffe Line, but changing meaning along its path. To understand it, one must go back to its place of origin. On December 11, 2019, as the Rajya Sabha passed the Citizenship (Amendment) Bill, Assam was being convulsed by a monumental surge of anger. In its history, marked by 600 years of uninterrupted Ahom reign, Badan Barphukan is one of the most reviled men, his name associated with what’s considered the highest treason—in 1817, he invited the Burmese army to help him capture the throne. This led to the fall of the Ahom empire and capture of Assam by the British. Since then, the word ‘Badan’ has become synonymous with ‘traitor’ in Assamese. Cut back to December 2019. Protests had erupted across the state—huge masses of people on streets, smoke billowing out of burning tyres, curfew, the army on standby, and a Kashmir-like internet lockdown, albeit temporary. Among the crowd, denouncing the contentious bill, using the innocuous-sounding shorthand CAB, many are identifying present-day ‘Badans’—politicians seen as having sacrificed the state’s interests at the altar of Hindutva politics. Heading the list are leaders who once led the six-year-long movement against what later gained currency as “illegal migration” (or “illegal infiltration”), especially from Bangladesh.

Illegal migration. Pause on the two words. For decades now, it has been the leitmotif of Assam’s politics, and to an extent that of the Northeast; it has made political leaders out of students, catapulted parties to power and, tragically, even led to mass killing of innocent people. The phrase itself has migrated to the rest of India, while never relieving Assam of its pincer-grip. Recently, it led to a massive, controversial exercise in the form of updating the National Register of Citizens. The NRC identified a staggering 1.9 million—originally over four million—as people whose citizenship is in doubt. Yet, most Assamese backed the NRC, hoping it would identify the “lakhs” of illegal migrants, paving the way for their deportation. It was a sprawling mess, full of loopholes, and it is in those gaps that a new, mutating law took final shape—beginning from its first avatar in 2016 to the final one of 2019.