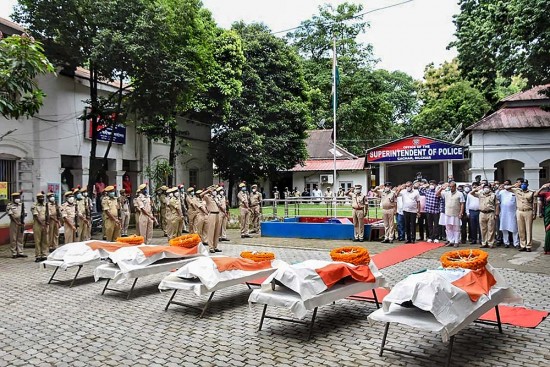 The  video clip is just 25 seconds long, shaky and barely shows a few people holding automatic firearms, crouching behind an overturned vehicle. But what stands out is the background sound: continuous staccato bursts of gunfire, the kind of sound more likely in the battlefields of Syria or Afghanistan. Then there are other video clips, all shot with mobile phone cameras. One shows a group of armed-to-the-teeth Mizoram Police personnel in battle fatigues on a hilltop. One of them could be barking an order: “Paanch minute time deta hai, chala jao (giving you five minutes to leave). There is an environment of tension. There was another, and as telling.  A group of armed Mizoram Police personnel coming down a hill slope to loud cheers from civilians wielding sticks; there is back-patting, high-fiving and handshaking all around. The environment is one of joy over what seemed to have been a task well-accomplished.

From a hilltop perch, these policemen had allegedly fired their lethal weapons—including light machine guns—at Assam Police personnel, leaving six of them dead and about 40 more wounded along a disputed stretch of the interstate border between Assam and Mizoram. The Northeast had just witnessed another bloody fight in its long border feud among its states. It was July 26, the day India celebrates its victory over Pakistan in the Kargil War. Assam claims the disputed land to be in Lailapur in Cachar district. Mizoram says it is its land, in Kolasib district. The dispute, like so many other interstate flashpoints, dates back decades to the time when Mizoram, earlier known as Lushai Hills, was carved out of Assam in 1972.