In a contest of sorts, some recent announcements around statues show how each one is being built to be bigger than the other 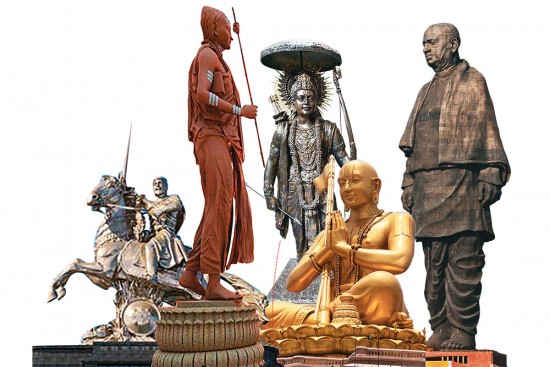 Statue of Shivaji Bhonsale I, the warrior king who founded the Maratha Empire, is 690 ft tall. To be located in the Arabian Sea near Mumbai, this project will cost the Maharashtra government around Rs 3,600 crore.

The Maharashtra government wants this statue to be taller than the Statue of Unity. Larsen & Toubro is undertaking this project. Recently, Maharashtra PWD proposed extension of the project without cost escalation, after it was halted by courts. The project is facing stiff opposition over safety and environmental concerns.

The statue of Valla­b­hbhai Patel is currently the world’s tallest, at 597.13 ft. It is located on the Sar­dar Sarovar Dam in Kevadia, Guja­rat. It cost around Rs 3,000 crore, and was ina­ugu­r­ated on October 31, 2018, to mark Patel’s 143rd birth anniversary. It was mired in controversy over its funding, land acquisition and environmental clearance.

The MP government is planning to build a 108-ft alloy statue of Adi Shankaracharya on a 54-ft platform, along the banks of Nar­mada in Khandwa district. Shankara­charya was a Vedic scholar and proponent of the Advaita Vedanta school of philosophy. “Let the world become one family,” said MP Chief Minister Shi­v­raj Singh Chouhan, des­cribing its purpose. Its estimated cost is Rs 2,000 crore.

To be installed in Ayodhya at an estimated cost of Rs 2,500 crore. At 823.4 ft, it will be taller than the Patel statue. Its construction was announced in 2017 by CM Yogi Adityanath as part of the UP tourism departm­ent’s Navya Ayodhya scheme. Another sta­tue, of Nishadaraja Kevata, the boatman who hel­p­ed Lord Ram, Sita and Laxman to cross the river during their exile, will come up nearby.

The 216 ft statue of 11-century Bhakti saint Bhagavad Ramanuja in Muchintal, Hydera­bad, is now the world’s second tallest sta­tue in a sitting posture. The project cost of Rs 1,000 crore was crowdfunded from devotees worldwide. Made in China by Aerosun Corporation, it was sent to India in 54 shipments. Made with panchaloha, an alloy of five metals­—gold, silver, copper, zinc and brass, it includes a 120 kg gold deity in the inner sanctorum.

(This appeared in the print edition as "Sky’s the Limit")