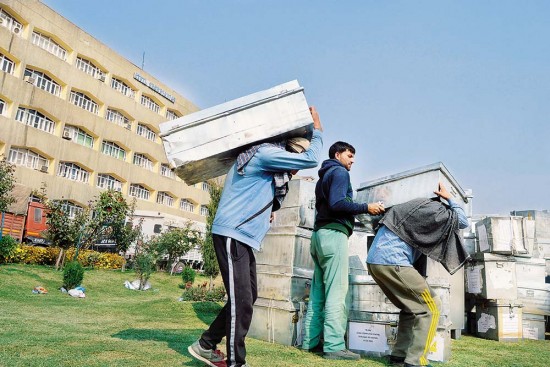 The contrast could not be starker. On September 22, as Jammu observed a total shutdown called by its business community, there was not a ripple in Kashmir. The spell of silence that descended in the wake of the abrogation of Article 370 on the Valley—once the terrain of fiery protests against the government and security forces—remained unbroken. “The Jammu traders are lucky,” quips a Kashmiri businessman. “In the Valley, a call for protests would have landed a large number of people in jail.”

The Jammu Chamber of Commerce and Industry (JCCI) had called for a day-long shutdown in protest against various decisions of the government, including a new excise policy, new geology and mining policies, and the proposed opening of a chain of Reliance Retail stores. Another prominent issue was the J&K administration’s decision in June to end the ‘Durbar Move’—the 149-year-old biannual tradition of the seat of government shifting from Srinagar to Jammu and back. Traders in the erstwhile ‘winter capital’ have been seeing it as an assault on Jammu’s economy.

On the day of the shutdown, all parties, except the BJP, joined rallies at various places in Jammu region. At Kanak Mandi, protesting traders said they have been traditional BJP supporters, but will vote against the party in future. The protests in what is widely regarded as a BJP bastion seem to have unnerved the saffron party, and its local unit has decided to take the issues raised by JCCI to the central leadership in New Delhi.

The JCCI president says they don’t want outsiders to start ruling Jammu like the British did.

JCCI president Arun Gupta says they don’t want people from outside to come to Jammu and “start ruling the way East India Company was ruling India”. Traders say they never thought the government would act against the interests of the “nationalists of Jammu, who have supported the abrogation of Article 370”. Some brazenly point out that they had expected only people in Kashmir to “suffer due to the anti-India sentiment in the Valley”.

Former minister and PDP leader Naeem Akhtar says people in Jammu are having such an experience with the government of India for the first time, and that’s why they are now rem­inded of the East India Company. “Otherwise Jawaharlal Nehru dispensed with his best friend Sheikh Abdullah to keep Jammu happy. The current discourse in Jammu makes one believe they were told only the Valley would have to suffer consequences of the abrogation of Article 370. Seeing it happening in Jammu too, they feel betrayed,” he says.

Before the government ended the Durbar Move, about 10,000 employees working in the civil secretariats in Jammu and Srinagar would move between the two cities twice every year. Lakhs of Kashmiris used to move to Jammu during the winter months and that helped the retail business in Jammu to flourish. Gupta says the government has destroyed trade of over Rs 10,000 crores between Kashmir and Jammu, just to save Rs 200 crore in transportation. Claiming that the Durbar Move used to bind the two regions together, he recalls how an agitation by traders and the bar association in Jammu in the 1980s forced then CM Dr Farooq Abdullah to roll back his plan to end the practice.

Lieutenant Governor Manoj Sinha, however, has called the Darbar Move a big racket. He says the government won’t go back on its decisions because of the whims and fancies of a few. This has put the BJP in Jammu in a fix. The party cannot condemn the Lt Governor, but it wouldn’t want to be seen as “anti-­Jammu” either.