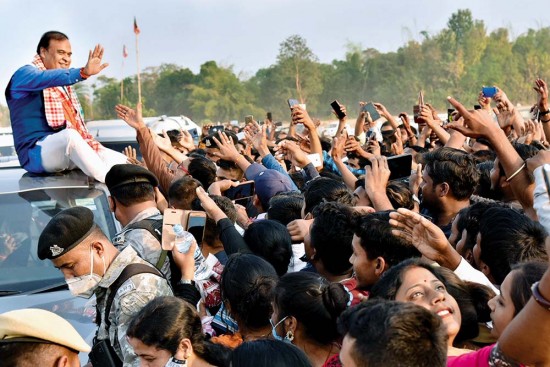 Curious things happen in politics—stranger than leaders switching sides to embrace ideologically opposite parties. But Golaghat constituency in Assam presents a picture bordering on the bizarre. MLA Ajanta Neog is the BJP candidate for the seat and she is up against a familiar foe, Bitopan Saikia of the Congress. That is not the story. In 2016, Neog was the Congress candidate and Saikia was with the BJP. Neog joined the BJP recently and was named the Golaghat candidate. A miffed Saikia found a new home in the Congress. Golaghat is a sub-plot in the unfolding theatre in Assam—Elections 2021. But it gives an idea about the political churning: the ruling BJP is luring ‘winnable’ leaders while opposition parties are hedging their bet on ‘discards’. Even that is not the entire story. Five years after winning Assam—a traditional Congress stronghold—for the first time, the BJP is facing a bigger challenge than it would admit. The Congress-led alliance of eight parties, including the All India United Democratic Front (AIUDF), actually fancies its chances of wresting power on May 2, when votes will be counted. Elections to the 126-member assembly will be held in three phases—March 27 and April 1 and 6.

Minister and master strategist Himanta Biswa Sarma—whom many consider to be the power behind the throne of chief minister Sarbananda Sonowal—has cited a single possibility for the BJP-led alliance of Asom Gana Parishad (AGP) and United Peoples Party Liberal (UPPL): 100+ seats. Sarma’s calculations have rarely gone wrong, even when he was a Congress minister till before the 2016 assembly polls. It’s not for nothing that the BJP’s central leadership has reposed its faith in Sarma. Even if it means dumping the Bodo People’s Front (BPF) ahead of the polls to find a new ally in the UPPL, another party with a Bodo base.