Calcutta Backpedals As It Bans Bicycles From Its Arteries

A ban on cycles from major Calcutta streets endangers livelihoods and channels of urban economy. It represents a warped idea of planning and an antipathy towards the working classes. 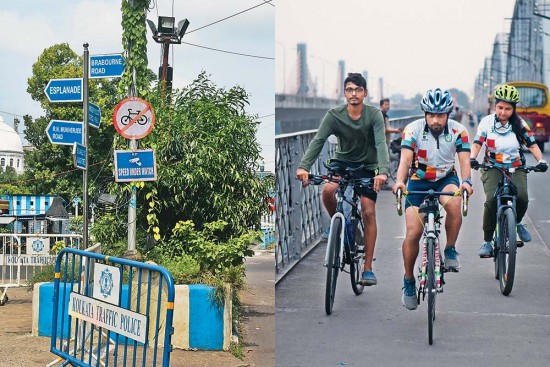 Why am I expected to make way for a car? Why is it that the rush hour is for them? Do I not have to reach my work? Or is my work not important? Who gets to decide which occupation is important and which one isn’t?” asks Prasenjit Dutta, sipping his chai…. ‘I’ and ‘them’. There are clearly two Calcuttas in this story. A middle-aged medicine salesman taking a break at a roadside stall outside Mehta Building, in the beehive-like busyness of Burrabazar’s wholesale markets, gives you just the snapshot you need of one of them. Dutta collects orders and supplies medicines from Mehta Building to local shops within a cycleable range. This is the Calcutta that cycles to work. And cycles at work.

What is it like, really? Pushing away at those pedals in a dead rhythm, on a beat-up cycle, bobbing and weaving your way through another humid mid-day, trapped in endless negotiations with exhaust fumes? The man next to him starts laughing. No time for existential dreariness there. There are more pressing problems at hand. Dutta, I’m told, is one of those faces the traffic police can identify from even a distance.

How does a harmless medicine salesman get to be on the list of usual suspects? Well, Dutta explains, being a resident of Manicktala, he has to cycle through Mahatma Gandhi Road to get to work. That’s the root cause of his rec­idivism—and those recurring fines. Mahatma Gandhi Road, Camac Street, Shakespeare Sarani, Rashbehari Avenue Connector, Indira Gandhi Sarani and Ashutosh Mukherjee Road…these are among the 64 major roads of Calcutta where cycling is banned at present.

Since the days of Left rule, this city has seen a growing hostility towards its cyclists—even if perhaps lakhs of livelihoods depend on this humblest, and most eco-friendly, way of transporting a human from Point A to Point B along a zigzag line.

It’s ironic this should be happening in Calcutta, traditionally a more plebeian-friendly city, but with as many fancy cars hogging its scarce street acreage now as those old yellow-and-black Ambassador taxis, that elite hostility is flowing downward. On Park Street, traffic constable Rajib Mondal has his answers ready. “These are not alleys. These are very congested main roads often accessed by VIPs. Cyclists don’t obey traffic rules and we don’t have the powers to prosecute them.” The words tumble out robotically, a mite irritatedly. “Take this road, Park Street. Judges use it, so do high-ranking government officials. If there’s any congestion here because of cycles, who do you think will get pulled up?” His subordinate adds, for good measure, “These cyclists neither know, nor follow rules. They just cause commotion.” A ban is the only way to reduce accidents here, they agree.

Lakhs of livelihoods depend on this humblest, and most eco-friendly way of transporting a human from point A to point B.

A Zomato delivery person waits on his cycle nearby. Pointing a thumb that way, the constable asks, “Look at him. Should he have taken this route? No. He should have parked somewhere on Free School Street and walked, but he didn’t do that.” But he has a time-slot assigned to him, doesn’t he? He has to collect the food and deliver it within that. “That’s not our problem, right? That’s between the company and them. The delivery folks should figure out how they can manage. That’s not on the government. It’s not like they are doing social service, right? They are doing it for themselves.”

Doing it for themselves. Yes, too many people in India have to do it for themselves…there’s no state welfare, after all. There was a time when the picture of a toiling Indian would have been romanticised. “You must be wondering what brings on this new apathy,” says Dr Sneha Annavarapu, assistant professor, Urban Studies, Yale NUS College, Singapore. It’s bec­ause attitudes have changed in new India, even in Calcutta. “Because they are poor! Vendors and cargo-cyclists who sell vegetables, deliver gas cylinders and circulate household and ind­ustrial waste…they are seen as a nuisance on the streets,” says Dr Malini Sur, senior lecturer in Anthropology, Western Sydney University, who has been researching urban cycling, informal economies and environmental issues in Calcutta.

There’s a special cruelty about how city planning estranges cyclists from the main streets. “These daily-wage earners, including migrant workers, are not just commuting to work, like many do—in Calcutta or Sydney,” says Dr Sur. “For them, cycling is especially laborious because they are carrying heavy goods. It’s very important for them to have access to a network of roads that connect markets, residential localities and small workshops.” To begin with, dedicated cycling tracks are a rarity in India. And then, “when city and traffic planning prohibit cycling on a series of strategic roads, you are cutting off key nodes of city economies, in turn cutting off goods and services from moving throughout the city,” adds Dr Sur. “Such planning disrupts urban economies and livelihoods. It does not acknowledge the bicycle’s central role in setting the city into motion.” 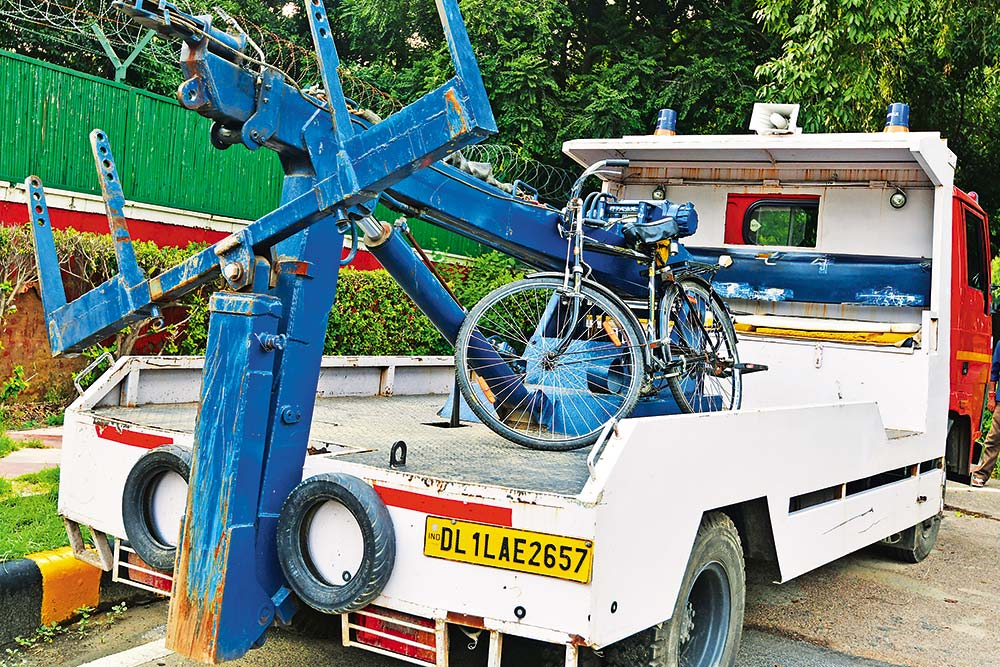 A cycle being impounded in Delhi, which too is bicycle-unfriendly

Ideally, all cities should mandate a separate, safe lane for cyclists. In the abs­ence of that, cyclists merely get by as an afterthought, as “vulnerable road users”, sharing space with high-speed motor veh­icles. Streets with heterogeneous tra­ffic are considered hard to govern beca­use of the varying speeds and mobility patterns of different vehicles. From the traffic police perspective, that often lea­ves the cyclists as the ‘errant’ party: biking on the wrong side, or changing lanes suddenly. “There is, of course, a class dimension to who is considered a ‘nuisance’. Someone riding a fancy sports bike might be less prone to being characterised so than someone from a low-income bracket,” explains Dr Annavarapu.

Hetereogenous traffic is considered hard to govern. From the traffic police perspective, that leaves cyclists as the ‘errant’ party.

The numbers there are higher than you may imagine. Biswajit Ghatal quit his job at a South Calcutta mall when he stopped receiving his salary during last year’s lockdown and joined Swiggy to do delivery—on a cycle. Within three months, he learnt Swiggy had no more vacant slots for cyclists, such was the rush of people ready to go around delivering everything from kathi rolls to bhetki on their engine-less two-wheelers. What will they all do if the ban is strictly followed? “Probably they will allocate to us locations that do not have a ban on cycling,” says a stoic Ghatal. “Places that have a ban might be allotted to folks who use mob­ikes to commute. It won’t be that much of a problem, I think.”

Anuradha Pathak, social art practitioner and co-director and head of the Calcutta chapter of the Council for Arts and Social Practice, is passionate about the question of cycling being accorded its due place in Indian urban planning. “Not only should the ban be just lifted, separate lanes must be made for cyc­ling,” says Pathak, a Super Randonneur herself. At his level, traffic constable Mandal too is an advocate for cycling lanes. “Even if you carve out cyc­ling lanes from the footpaths, it will do. Neither commerce nor pedestrians will be affected”. But modifying the patterns of traffic flow can only be an after-­effect; a key prerequisite here is that the pathways of thinking itself be altered. Official uncaring only reflects a rising antipathy among the middle and upper classes towards the working class.

“It’s definitely hostility towards the poor but it’s also hostility towards any­thing other than cars—cars are seen as symbols of modernity. Government officials who are banning cyclists have bought into this vis­ion where a modern city is one that has multi-lane highways with lines of cars moving swiftly through. In that vision, the street is a simple, monofunctional circulatory system that moves as many cars as possible, instead of moving as many people as possible,” says Dr Jonathan S. Anjaria, associate professor of Anthropology, Brandeis University. In such a cityscape, a cyclist is seen as an impediment rather than as a self-fuelled, energy-efficient commuter who leaves no carbon footprints.

Dedicated lanes ensure cyclists are protected from injuries and fatalities from speeding motor traffic, concedes Dr Sur, but she adds that cycling activists should also address the question of road equity. “It’s very important that cycling activists ensure that all cyclists are able to access these lanes. The relationship between the building of cycling lanes and city gentrification is a complex one. In Indian cities, where urban cycling is increasing among young, middle-class professionals, we must ensure these lanes do not become exclusive pathways.” In other words, while cyc­ling-friendly infrastructure sounds good and inclusive, it has its own pot­ential of reproducing exclusion. Dr Anjaria, on the other hand, feels parity will flow from more people being encouraged to cycle. “Once you are on a bicycle, you feel and see the city differently. Yes, someone from the upper/middle classes will definitely not have the same experience as someone from a community that cyc­les for its livelihood. But they could come a little closer to that experience, develop a bit of emp­athy, if they can see what it’s like to ride a bicycle on these streets, even for brief instances, and not be limited to a windshield view of the city.”