Can Laidback Pensioner’s Paradise Mysore Stay Off The Fast Lane? 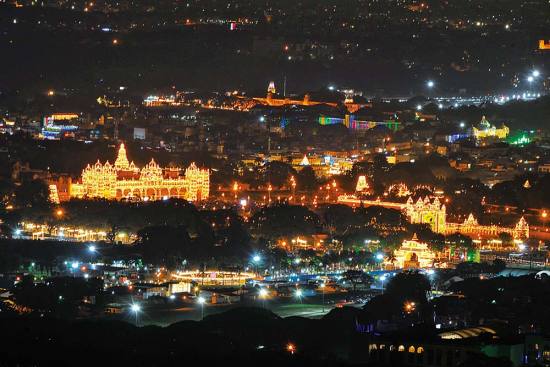 There’s something curious about Mysore. Just look at its air traffic these past several months, for instance—it has actually grown, even in a pandemic. The number of aircraft movements aren’t jaw-dropping, of course. Just about 3,513 in the year to March 2021—under 10 flights a day on average. But still an 11 per cent annual increase in a year when nearly everything came to standstill for many months. If you go further back, the current figures are nothing short of a big leap because not very long ago, the Mysore airport, located just a little to the south of the city’s iconic Chamundi Hill, was dormant. As idyllic as things could be in Mysore.

Cardiologist K. Javeed Nayeem, a ­long-time resident of Mysore and whose chronicles regularly appear in the city’s top eveninger, admits that his prediction—made a decade ago—about there being no takers for a local airport had been off the mark. It’s a pointer to how Mysore has grown over the years, he says. More likely, a pointer to the hassle of driving down—via treacherous traffic—to the Bangalore airport just under 200 km away. But there’s no looking back for Mysore now, he reckons.

On the ground, however, things can still be placid. “Even today, at the busiest time, I can go from one corner of Mysore to another maximum in 20 minutes,” says Nayeem. It’s been the endearing feature of a place where time has an ­elasticity of its own—a verdant home of elegant old buildings where musical ­evenings are a big draw, and still a pensioner’s paradise that many hope to ret­ire to one day. “Every other area has its own koota (assembly), dance centres and things like that,” says Vikram Muthanna, managing editor of Star of Mysore. “You ask any hardcore Mysorean and he’ll tell you ‘I’m not very ambitious, I don’t want to make too much money. I still want to have my walk up Chamundi Hill in the morning, or at Karanji Lake. I want to be able to peacefully have my dosa at 5.30 in the evening.’” 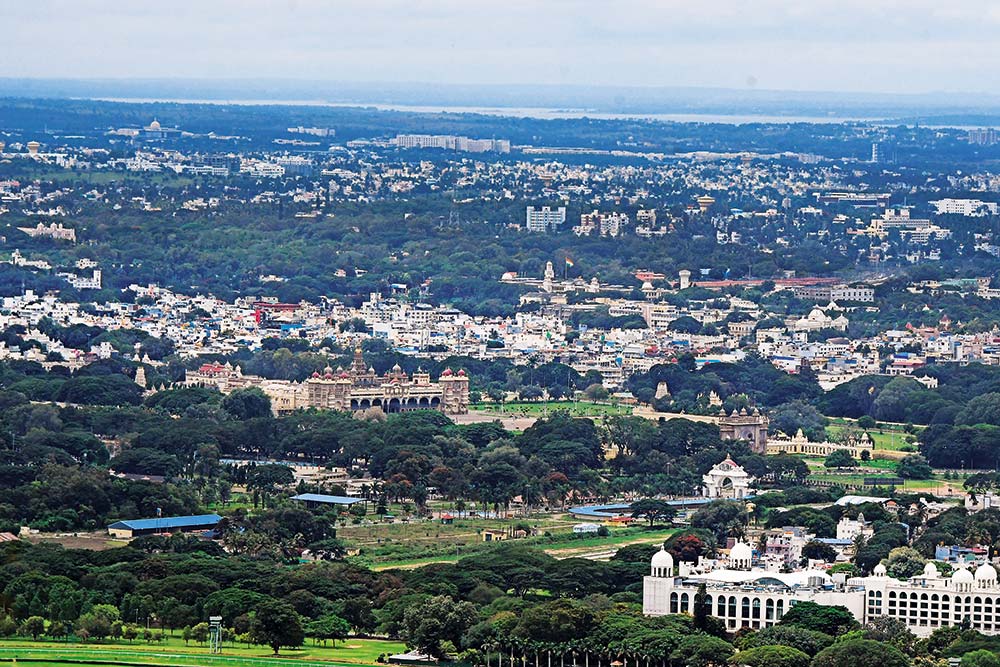 It was this reverie that was suddenly interrupted in late August by two violent crimes—a group of workers revelling near Chamundi Hill raped a college ­student, and separately, a jewellery store robbery during which a resident was shot. “These two crimes have only ­exposed the vulnerability of Mysore,” Nayeem says. He isn’t speaking strictly in the context of the city’s crime graph—which he reckons to be moderate—but the arc that the city itself has traced over the years. Mysore is growing for sure. But with all its inherent paradoxes. For over two decades now, it has lived in Bangalore’s shadow because it never quite became the boom town the savants predicted it would be. But on other fronts, culture being foremost among them, it was never second fiddle. Rather, it was the proud aristocrat. “I think this was aided by the fact that politically and in ­popular consciousness, it remained a very important city. That was the unique feature of Mysore,” says writer Aroon Raman, who had a close-up view of the region for many years as an industrialist running ­factories there.

The paradox extends to that sphere too—modern industry in Mysore traces back a century, but that ­historical heft did not reflect in later years. Mysore’s economy, as social historian Prithvi Datta Chandra Shobhi puts it, even today depends on remittance to a large degree, apart from ­tourism. “On the basis of its economic activity alone, the city won’t be able to sustain itself,” he says. It’s been the case historically because the city has been a centre for spending from the hinterland, such as the agricultural districts of Mandya or Coorg, he reckons. Even now, most youngsters gravitate to Bangalore or beyond for work, while those living elsewhere dream of Mysore as a place to settle down. Not surprisingly, as many Mysoreans will tell you, there’s been quite a bit of speculative investment in housing plots, given that private layouts have mushroomed around the city. If there’s been a boom over the past several years, it’s been in real estate speculation, which has pushed prices out of reach for cityfolk, old timers complain.

During the pandemic, says Muthanna, many have discovered Mysore, or rather rediscovered it, from a remote-working perspective. “Everything is accessible,” he says. Shobhi concurs, “The city has actually become quite appealing for even someone who expects the kind of ­amenities and consumables that they would want in a place like Bangalore. Even 10 years ago, you wouldn’t have ­expected to get all that.” Like restaurants and such. Now, there’s even a new sailing club in the backwaters of the Krishnaraja Sagar dam. Besides, there are the regular weekend getaways—hills, forests, plantations, resorts—to which Mysore always had the best access. 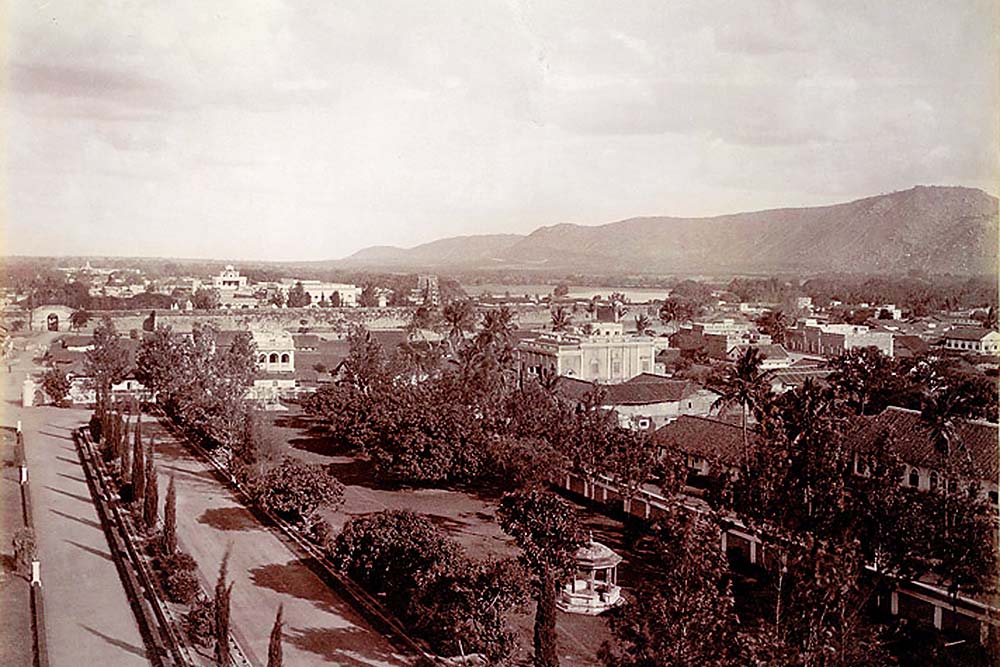 Mysore as seen from the iconic Jaganmohan Palace

But here’s the paradox again: the central part of that appeal is the throwback to the past—the realm of R.K. Narayan and Malgudi, so to speak. It is still a ­manageable city—among the cleanest in India for several years now, by official rankings. But that manageability is being put to test. In an essay a decade ago, Shobhi wrote about how the Malgudi ethos had been fading further into sepia with the flow of money into speculative real estate investment, driving, as he termed it, a ‘new urbanism’. It’s something every city struggles with, for sure.

“Mysore has always been on the cusp, always sitting at the edge but never going over it,” says Lakshmi Palecanda, aut­hor, and a relatively new resident of the ‘city of palaces’, having settled there just over a decade ago after an 18-year stint in the US as a molecular bio­logist. It’s certainly sedate compared to the city she grew up in, Coimba­tore, which rapidly became a thriving industrial hub. If one wanted to liven thi­ngs up ­occasionally, a qui­ck change of scene to nearby Banga­lore would serve the purpose, especially for her as a writer of ­romance novels, Pale­ca­nda quips. In most other cities, she points out, the older folk are likely to be ensconced in their homes, crowded out by youngst­ers. “You won’t find them out and about. Whereas this is where pensioners will go out for walks, to concerts, book discussions and so on.” Mysore stands out because of its greenness, she says. “It’s still got its grace. You’ll be going somewhere on business where you’ll suddenly come across an old building amidst modern structures, reminding you of your place in history.”

Look at the software ­sector—Mysore appeared on the IT map in the mid-noughties when Infosys set up its training centre there. But in the years since, the digital economy has been a trickle, not the cascade many predicted, considering how close it was to Bangalore. That, one could argue, holds good for other cities in Karnataka too—weaning industry away from Bangalore to other locations has been the ambition for every government since Y2K. 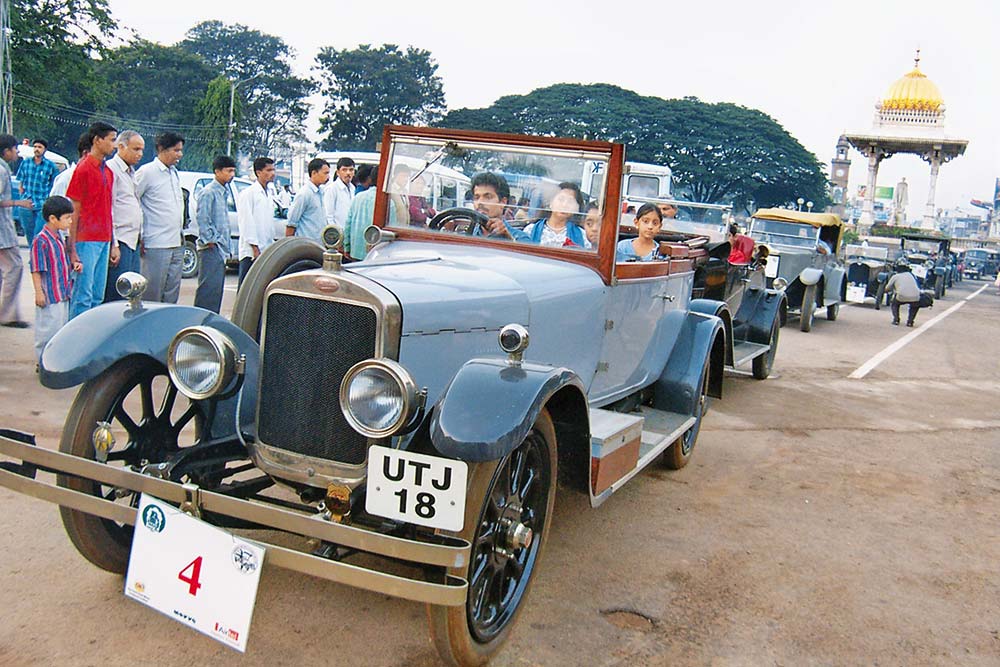 A vintage car rally in the city

“It is strange but a lot of manufacturing that came into Mysore actually sputtered and failed, the answers to which don’t seem to be very clear,” says Raman. This was, of course, before the software era. “In fact, Mysore was a hub of industrial sickness, I would say, particularly in the 1980s and ’90s. A lot of good companies went phut.” But there were gains on the flipside—it didn’t witness the kind of frenzied growth that strangulated Bangalore nor did Mysore’s special stature allow the city to deteriorate. “That, I must say, allowed Mysore to remain a very lovely city for a very long period.”

Mysore is ­growing for sure. But with all its ­inherent ­paradoxes.

While this old Mysore remains, change is certainly beginning to overtake it now, he feels. The industrial corridor south of the airport towards Nanjangud is now more or less becoming the continuum it was originally envisioned as three decades ago. “There were many challenges,” says Pavan Ranga, who heads the Mysore chapter of the Confederation of Indian Industry. The boom town narrative, he says, was largely based on the presumption of spillover growth from Bangalore and there was never any holistic plan for the region. “In reality, it doesn’t just ­happen like that. Mysore never really saw the benefits of being in the vicinity of Bangalore.” For a city of just over a million, it has more than 25 technical ­institutes and six engineering colleges, yet it couldn’t hold back talent. Now, there are initiatives being put in place for industry and entrepreneurship, with an eye on electronics and technology, he says. “Historically, electronics manufacturing has been a hub in Mysore. Now the government is giving a boost to that by setting up the local ESDM cluster,” says Ranga. “We have seen some traction in the last five to six years that we hadn’t seen in the last ­couple of decades.”

If connectivity was a ­hurdle earlier, that’s soon going to change, notes Muthanna. Just like how air traffic has picked up, the new 10-lane highway connecting Bangalore should cut down travel time dramatically when it opens next year. But the challenge it holds out for city planners is to steer things in a sustainable manner and not let it ‘go the Bangalore way’. The heritage-versus-development tussle is already visible, and there has been civic activism to protect public spaces and old buildings. “This is bound to happen as there is no clarity on what is heritage. What the city needs is a hybrid model that will allow it to keep its personality while allowing for expansion,” he says.

“Mysore has for too long been a dumping ground for extra money,” Muthanna adds. “A lot of those living abroad all end up, for nostalgia’s sake, buying some property, thinking one day they would be coming back to the Mysore they lived in. And, luckily for them, every year when they come to visit Mysore, they see things haven’t changed too much.” But change, he feels, is going to creep up on the city and, before that happens, the government should be ready. “Not now, maybe not next year. But it will change in the next five years.”

(This appeared in the print edition as "Mysore! My Sore?")