With people of Northeast facing inhuman atrocities as security forces get away with murder, it's time this draconian law must go. 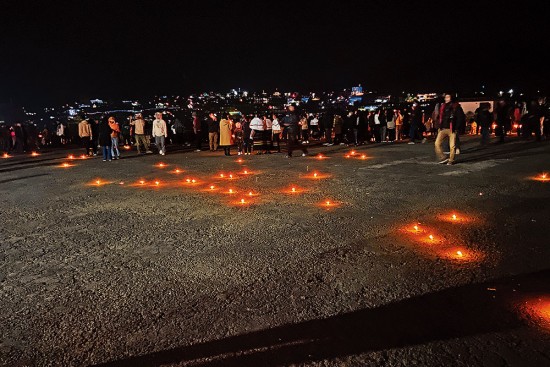 It was one of those cold winter evenings when my uncle was escorted in by a band of gun-toting men clad in olive green. He had recently come down to the town and happened to have attracted the attention of the patrolling Assam Rifles. His fault? The long hair, and thus suspected to be a Naga underground cadre. Perhaps, wearing the teisa shawl had added to the suspicion of potentially carrying arms underneath! Peeping through a hole on the bamboo wall, I saw the glittering stars on the captain’s shoulders who had dem­anded to see proof of my uncle’s education. The moment my uncle told his sister —in our own language—where the certificates were, the young officer jammed the barrel of his pistol inside my uncle’s mouth, abruptly cutting off his words. That fearful encounter traumatised my young mind for many years to come. The impunity at which the Indian armed forces operate in many parts of India’s Northeast is not just a one-time incident. It continues to be a nightmare for the common folks.

The recent killing of 14 Konyak Nagas on December 4 by the Assam Rifles at Oting in Mon district only brought back fresh memories of how generations have endured the consequences of counter-insurgency operations. The narratives that have emerged on different platforms in the past week clearly points to how this incident has opened up deep wounds of the past. These young men were on their way back from the coal mines after a long day at work. Who would have thought of an “ambush” by a well-armed military force that prides in giving themselves the slogan ‘Friends of the Hill People’? How farcical a title! The public outrage following that incident has led to a mass movement across the region for repealing the Armed Forces (Special Powers) Act of 1958, commonly referred to as AFSPA. 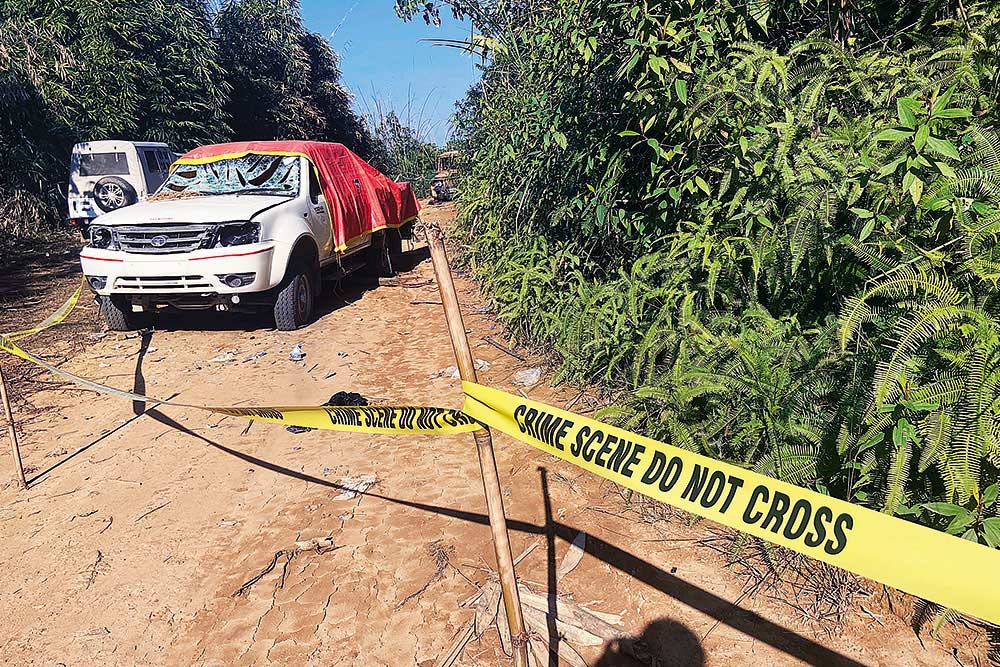 The spot where miners were shot dead.

Promulgated to empower the armed forces operating in “disturbed areas”, AFSPA gives them the right to “arrest, even without warrant” and “fire upon or otherwise use force, even to the causing of death” on grounds of mere “suspicion”. And this power can be exercised even by a non-commissioned officer. To top it, they enjoy complete protection because “no prosecution, suit or other legal proceeding shall be instituted… against any person in res­pect of anything done or purported to be done in exercise of the powers conferred by this Act”. Thus, with such immunity endowed, atrocities committed by the armed forces are just made to disappear. While this Act was initially enacted to cull the rising Naga movement in the 50s, it was subsequently enforced in the entire Northeast. In the 90s, the same was extended to Jammu and Kashmir.

Over the decades, there has been several ins­tances of excesses by security forces in areas where AFSPA is imposed. The Naga public, as also many other communities of the region, have lived through uncountable tragic incidents. So much so that many could not live their potential years owing to unimaginable torture by the armed forces during regular counter-insurgency operations. Too many innocent lives have been lost, too many maimed for life, and too many continue to live with stigma because of molestation and rape by the army during troubled times. And all those were met out as lessons to the public for sympathising with the undergrounds. Unfortunately, when actions were taken on mere “suspicion” there is no scope for defence. 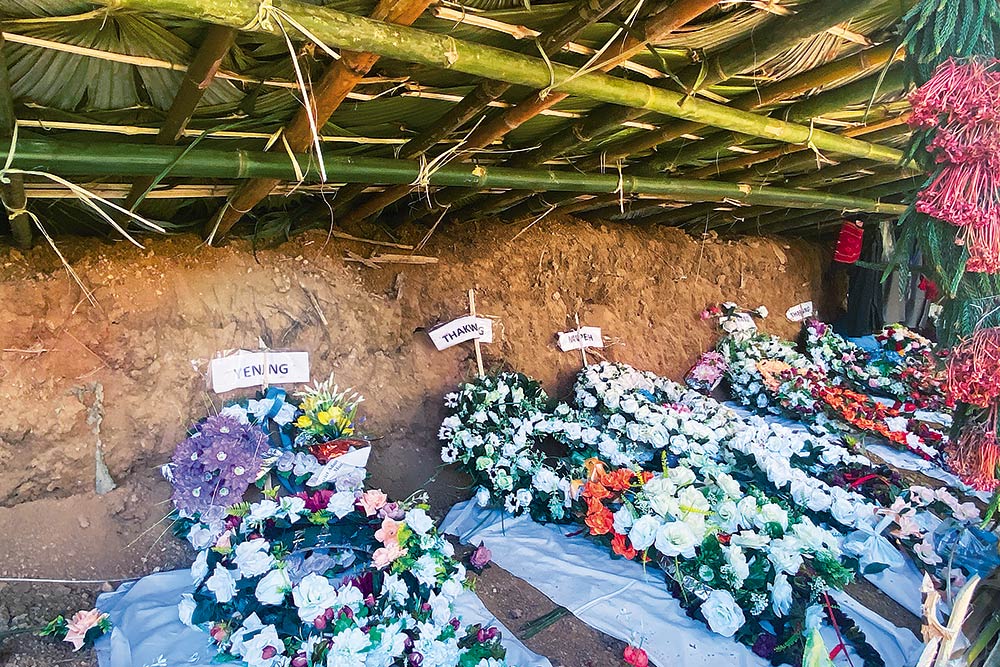 Though there have been recommendations for repealing the draconian Act from various states of the region, it remains in force in some states even today. While the Nagas and the Mizos bore the brunt of army atrocities in the early decades, the later decades saw inflictions on other people groups. Manipur alone has suffered tremendously because of fake-encounters, both by the army and the state police. Regrettably, even Irom Sharmila’s iconic and record-breaking 16-year-long hunger strike against AFSPA following the rape and killing of Thangjam Manorama in 2000 could not force the government of India to consider revoking it.

There have been several ins­tances of excesses by security forces in areas where the AFSPA is in force. Nagas have lived through uncountable tragic incidents.

The Oting incident will remain a scarred memory for long, because it happened in the midst of the Hornbill Festival, a state carnival that is held between December 1-10 every year. Unde­rstandably, the festival was cancelled following the incident. But how can celebrations go on in the midst of mourning and anger that spread across the state and even beyond? For the next few days, the misty Naga Hills was shrouded in gloomy skies and incessant rain, as if the heavens too were mourning with the people. Fresh anger manifested across different media platforms, and demonstrations were held in various cities. Thanks to technology, the news spread like wildfire across the nation and even rocked the Parliament on debates around AFSPA.

But this December incident also brought back bitter memories of another incident that happened on December 27, 1994, when the town of Mokokchung witnessed horrific rape, killing and arson by the Indian armed forces. As if the acrimonious blunder was not enough, in 2020 the Indian Army set up a memorial for their soldiers who died in the counter-insurgency operations in Nagaland, much to the shock and resentment of the Nagas in general, and the Ao Naga people in particular. It is when insults, instead of justice, bec­omes the reward, public emotion is filled with bitterness and they become more estranged. Another largescale violation of human rights occ­urred during Operation Bluebird, the codename for counter-insurgency operations launched by the Assam Rifles after the July 9, 1987, incident at Oinam village of Senapati district, Manipur. At the pretext of a combing operation to recover looted arms and ammunition, the armed forces committed mass killing, torture and rape. The operation that lasted for months in about 30 villages continue to haunt the memories of the people. Again, much to the dismay of human rights activists, in 2019, the Manipur High Court—the case was transferred from the Guwahati High Court—dismissed the case for lack of evidence despite rec­ords of 12 volumes running into some thousand pages filed by lawyer Nandita Haksar along with the NPMHR (Naga People’s Movement for Human Rights).  When things turn out like that, justice for the affected people is a far, far cry! 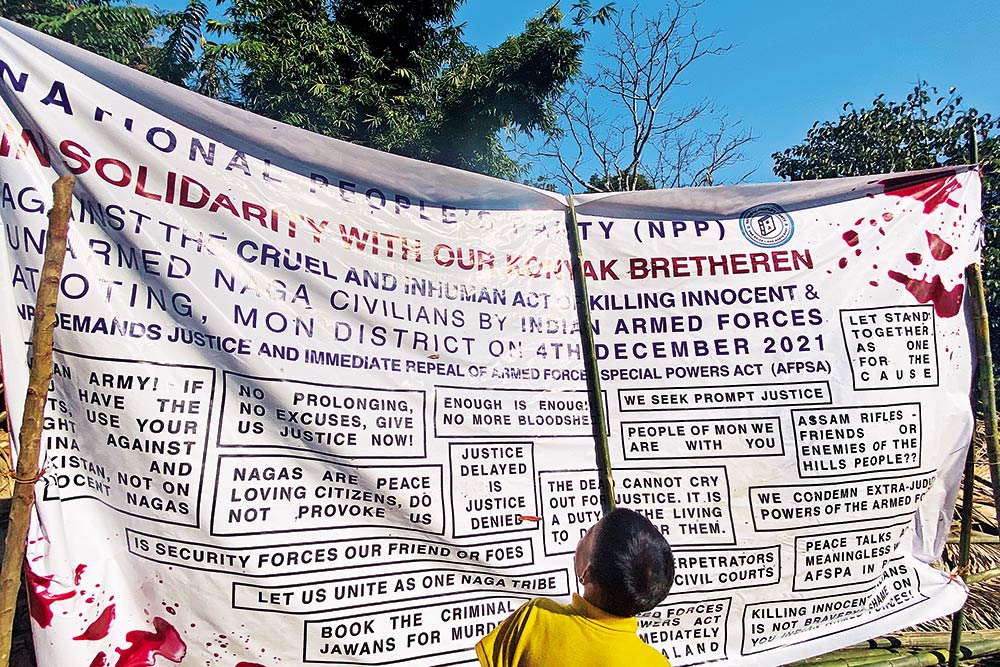 The December 4 incident has raised lots of deb­ates on persecuting the perpetrators and ass­urance of justice. But as long as AFSPA is in place, all those will remain empty words. The armed forces can never be brought to the legal courts because of their immunity. A hollow regret over “mistaken identity” is all we hear from them. News reports say that local pol­ice have filed an FIR against the Assam Rifles, saying “it is obvious that the intention of the sec­urity forces is to murder and injure civilians”. But there is nothing much that can be done against them. Will this be the last of such cat­astrophes? Unlikely. That this happened during a “ceasefire” period and when the anticipation for an amicable solution is high in the air is deeply regrettable. But peace is far from sight unless AFSPA is revoked. This is an opportunity to unite against the inhuman Act, lest it continues to be a tool of discrimination.

The 14 persons killed on that fateful day were hard-working men who were trying to make some extra money for the festive Christmas season. Some of them were young fathers and newly-married. Now their families will live a nightmarish life and the Nagas will have few more orphans and widows to count! Just like that, the month of joyous celebration has suddenly turned dark and gloomy.

(This appeared in the print edition as "Candle in the Wind")

Veio Pou Teaches at Shaheed Bhagat Singh College, Delhi University. He is the author of the novel Waiting for the Dust to Settle