Darkness At Noon: Stories Of Pain And Suffering In Battle-Scarred Kashmir

There are many stories of 'fake encounters' and other human rights violations in the Kashmir Valley. 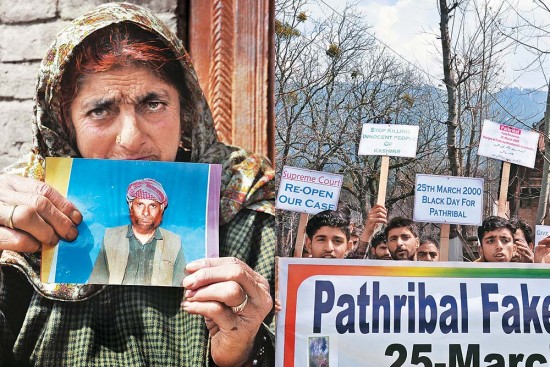 In the midst of the vast apple orchards of Ams­hipora in Shopian district of Kashmir, stands a one-storey brick shed. Its main door is locked. In the highlands around 50m from the shed, a shepherd is looking after his herd. Some distance away, closer to the road, an old man is carefully examining apple trees after this year’s bumper harvest. On the road nearby, two men are busy burning wood—from pruning apple trees after harvest—for charcoal. All of them know something about the brick shed: that’s where thr­ee Gujjar boys were killed in a fake encounter in July last year, after they were picked up by the Indian Army. They remember hearing bullets being fired that night, even though there was no huge deployment of troops as is normal during such encounters. “That’s because they bro­ught them to the shed to kill them,” the old man said nonchalantly, moving from one apple tree to another. “We know that like in other such cases there won’t be any justice. Life is che­­ap out here. Everything else has a price,” the old man says.

Six kilometres from the desolated shed in Ams­hipora, lawyers at the Shopian district court echo his words. Reluctant to disclose their names, they say a chargesheet has been filed in the case. Two civ­ilians have been accused and arrested, but no one from the army. They all­e­ge the chargesheet is very weak, with many loo­pholes, that it won’t stand legal scrutiny. They are suprised the army agreed to a court martial in the case, as under Jammu and Kashmir Armed For­ces Special Pow­ers Act (J&K AFSPA), it could have easily challe­n­ged the filing of the chargesheet.