Dalits have crafted unique visual metaphors to assert their identity and mark their place in politics and BSP played a big role in the process. 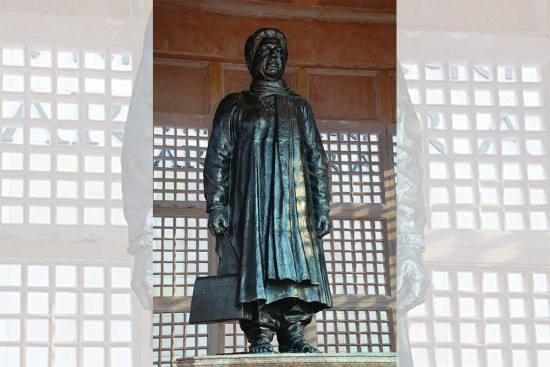 There is a common grouse among Dalit supporters of the Bahujan Samaj Party—that BSP lost the last two UP assembly polls due to “Manuvadi media’s neg­­a­­tive propaganda” over the crea­tion of  ‘Dalit heritage’ in Mayawati’s last term as chief minister.

Satpal Gautam, a party activist in Gautam Bud­dha Nagar district, believes the media bashing obscured all the good work done by Mayawati — India’s first woman chief minister from a Dalit community. This is how he articulates the sentiment: “When Behen Mayawatiji set up some statues and memorials, the media lampooned her. But the same media lauds other political parties when thousands of crores are spent on statues of their respective icons.”

He is referring to the statue of Sardar Patel in Gujarat, which is touted as the world’s tallest statue; or the proposed statue of Chhatrapati Shivaji Maharaj in the Arabian Sea; or the proposed 251 m tall statue of Lord Rama on the banks of Saryu River in Ayodhya.

Apart from memorials, several stupas, meditation centres and exhibition galleries were also added to the existing public parks during Maya­wati’s four terms as UP’s chief minister, between 1995 and 2012.

This commemorative architecture is viewed by many as lighthouses on Ind­ia’s political landscape that show the march of the socio-political movement launched by B.R. Ambedkar, the Father of India’s Constitution.

Referring to the statues of Indira Gandhi, Rajiv Gandhi, Sardar Vallabhbhai Patel, Shivaji, N.T. Rama Rao and Jayalalithaa in her affidavit filed in court, Mayawati had asked, “Are only statues of Dalit leaders erected using public money, and not the ones built by Congress or BJP?”

The term “Dalit”, which has been derived from Sanskrit and Marathi, means “crushed or des­tr­o­yed”. According to Ronki Ram, professor of Political Science at Panjab Univer­sity, when BSP made inroads in UP, public heritage bel­onged only to those communities that enjoyed a share in political power. “BSP organised Dalits in a political class. Kanshi Ram and Mayawati sta­r­ted projecting Sant Ravidas, Guru Valmik and Dr Ambedkar, among others, as Dalit icons,” he says. 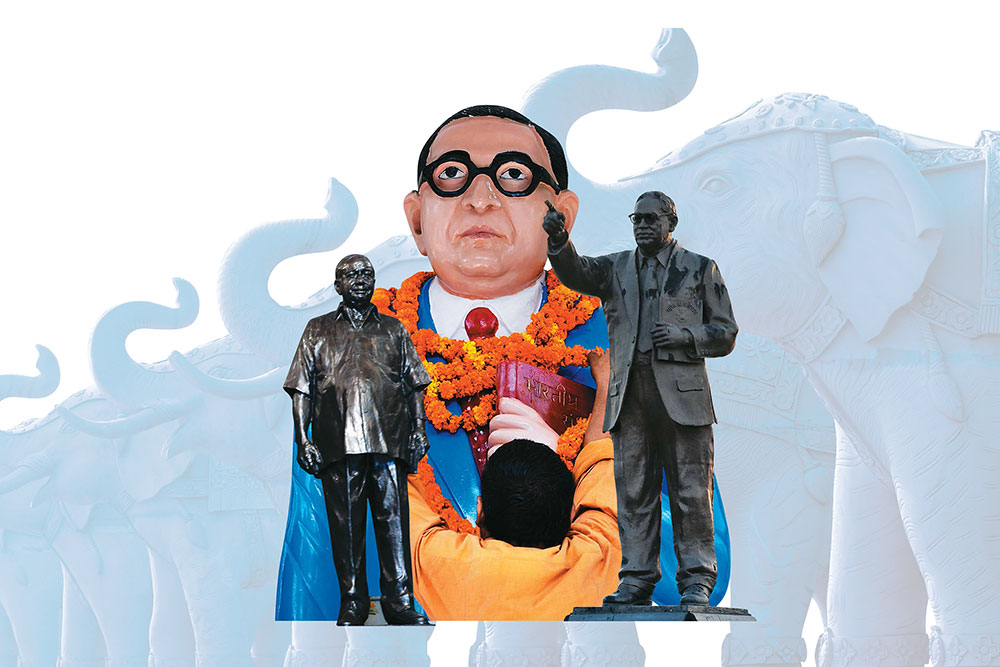 “This is how BSP started to reclaim Dalit heritage that was lost to the politics of domination,” he adds, describing the policy of building statues and memorials, and naming public places after Dalit icons, as the cultural capital of a community—a way of political assertion.

Those who have historically been controlling social and political structures can’t accept Dalit identity, he says. “In many places, Dalit grooms get attacked for riding a horse in their wedding processions.”

S.R. Darapuri, a retired IPS officer and president of All India People’s Front, says the 2018 Bhima Koregaon violence and the 2017 Saha­ranpur clashes were attempts at suppressing Dalit assertion.

Shabbirpur village in western UP, 25 km away from Saharanpur city, witnessed violence betw­een Thakurs and Dalits, starting from April 14, 2017. “The first clash happened over the propo­sed installation of an Ambedkar statue,” Darapuri says, enumerating how statues of Ambedkar are regularly vandalised by right-wing forces.

Asserting that the annual Bhima Koregaon ceremony symbolises the political aspirations of Dalits, Darapuri adds, “The attack on Elgar Parishad was in fact an attack on Dalit pride. The police action was taken against the victims and not the perpetrators.”

In Monumental Pride: Mayawati’s Memorials in Lucknow, an essay published in 2014 by Freer Gallery of Art, The Smithsonian Institution and Department of the History of Art, University of Michigan, author Melia Belli provides interesting insights into Lucknow’s Ambedkar Memorial and Prerna Kendra. Belli writes, “The sheer number of memorials, coupled with their monumental scale, arguably make Mayawati the single most prolific architectural patron in India since the British Raj commissioned New Delhi in 1911.”

Defending their installation, Mayawati told the top court that statues of elephants have extensi­v­ely been used in ancient monuments and temples, besides in pillars of the North and South blocks of Rashtrapati Bhawan. She stated the statues have also been installed in newly constructed public places across Delhi, like the Indira Gandhi Int­ernational Airport.

While she linked elephants with Hinduism, Bud­dhism and Jainism, she said, “Buddhism was adopted by Dalit leaders due to the inability of Hinduism to abolish the caste system.”

She was referring to Ambedkar’s conversion to Buddhism along with 3,65,000 of his Dalit followers in the belief that Buddhism was the only way for “untouchables” to gain equality, a trend that continues to date.

The sculptures of elephants commemorate the ideals and values of Sants, Gurus and leaders who have devoted their lives for humanity, equality and social justice, Mayawati had stated. “These memorials reflect aspirations of the oppressed and downtrodden sections of society, who have been marginalised by the caste system.”

Mayawati was also targeted for commissioning life-sized statues of herself and of her mentor and BSP founder Kanshi Ram, who had sworn to fulfill Ambedkar’s incomplete mission.

In her essay, which analyses intersections of politics, caste, gender and visibility at the two mem­orials, Melia Belli writes, “The forms and decoration of the memorials highlight the abs­ence of earlier Dalit leaders and present Mayawati as their legitimate political heir.”

ALSO READ: The Cost Of Piety, A Mirzapur Dirge

Belli talks about the aesthetics of Mayawati’s statues: “She has cropped hair; a plain, loose-fitting salwar-kameez; chunky sandals; a prominent wristwatch; and a handbag at her side.” Descri­b­i­ng her appearance as “androgynous”, she goes on to add, “The message conveyed is that she is fully capable of negotiating the male-dominated political arena. Her distinctly unfeminine appearance also highlights her unmarried status, and by exte­nsion, her complete dedication to the betterment of her community, which she confirms when questioned about her marital status.”

Asserting that Ambedkar was an iconoclast, Darapuri says, “Instead of spending crores on statues, Mayawati should have established schools, colleges, hospitals, libraries and other institutions in the name of Dalit icons as an effective step towards Dalit emancipation.” But for the masses, he adds, “Statues and memorials do act as a limited source of inspiration and ins­truments of assertion in social and political life, from which Dalit identity had been obliterated.”

Ambedkar’s first statue was installed in the Lok Sabha hall in 1966. And its relevance increased after BSP came into being. Professor Ronki Ram says, “Ambedkar had said: ‘If we want to claim our real status in Indian society, we have to seek our own identity—which will come only if we totally disassociate ourselves from Hinduism’.” For him, the professor adds, besides having an equal share in executive, legislature and judiciary, Dalit assertion means that “we get our own temples, Deras and things other communities own, and doe with these what others have been doing.”

Endorsing the viewpoint that Dalit memorials and statues are milestones of the Amb­edkarite movement, he adds, “They symbolise the victory of Dalit politics.”

(This appeared in the print edition as "Monumental Pride")