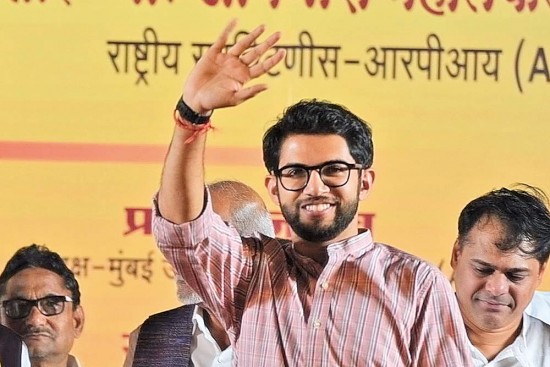 The roaring music welcoming Aaditya Thackeray to his interaction with youth at the National Sports Club of India in Mumbai sits uneasily with his mild demeanour, though the high notes match the Shiv Sena's campaign pitch. The event christened Aaditya Sanvad (Dial­o­gue), where young people gather in large numbers and ask questions to Junior Thackeray, was launched a few weeks ago as part of efforts to inno­vate the Sena's outreach through a mix of technology and engagement with youth. Prior registration is needed for participation in the event, which is also streamed live on Facebook.

At the April 22 event, the odd entrant, Priya­nka Chat­urvedi, smiles through most of the eve­ning, occasionally adding to Aaditya's res­ponses. Facebook comments are punishing, many ridiculing her move from the Congress to the Sena. The questions range from whether Aaditya is getting married, to how Mumbai's roads could be better. Speaking in English and slightly Anglicised Marathi, Thackeray seems to have done his homework on the iss­ues of roads, garbage, plastic, water-­logging, even Dharavi's redevelopment. While Raj Thackeray goes all hammers and tongs against the BJP and the Sena in his rallies, the soft-spoken Aaditya tries to woo the youth on civic issues through this dialogue. People may applaud the gesture, but can they be convinced that the Sena should not be held responsible for potholed roads and other civic disasters in Mumbai? And will Mumbaikars vote on such issues in the Lok Sabha elections?