Chennai residents thought that hell and high water would not revisit them, but it happened again this November. No lessons learnt from 2015? 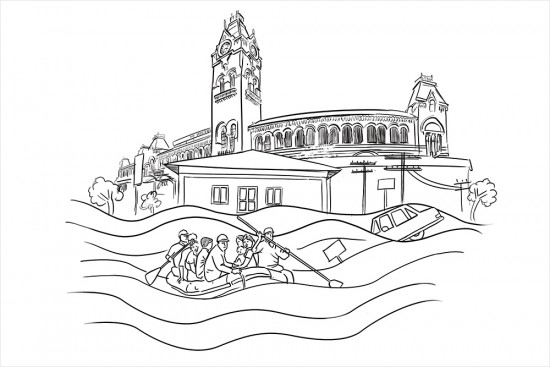 It seems Chennai residents need periodical reminders that they are no better off than the boat people—refugees fleeing their homes to safer places. The tyrannical regime they are fleeing from comes in the form of an unwelcome visitor—flood waters gushing into their homes.  First, they become prisoners in their homes, face food shortage and live in abject conditions waiting for normality to return. And when conditions become even more horrible, they prefer to take the boats in search of safer grounds. It happened in December 2015, and just when Chennai’s hapless residents thought that hell and high water would not revisit them, it happened again this November. Video footage of inundated neigbourhoods that played on loop on national TV were back in circulation—showing that no lessons have been learnt.

The last time the Adyar jumped its banks and sank a swathe of Chennai’s southern and central areas, it was blamed on the sudden opening of the sluice gates of the Chembarambakkam reservoir without any warning. In turn, officials silently pointed fingers at the then chief minister, late Jayalalithaa, who was unrea­chable on the night of December 1, compelling them to take the decision on their own. Her administration was accused of sluggish res­ponse to the crisis. A regime change failed to do any wonders when the floods came visiting this year. CM M.K. Stalin, more visible and hands on in running the administration,  blamed corruption and lack of flood mitigation work during the last EPS government’s tenure for the current deluge. The AIADMK retorted, asking what his government was doing for six months. The pre-monsoon meetings the CM held with officials to assess monsoon preparedness remained only on paper, they alleged.

If you are an outstation visitor to Chennai, a trip to its shopping district in T. Nagar remains a must. With an eye on the huge floating population that descends here, the previous EPS government chose to upgrade T. Nagar as part of the smart city plan. Almost Rs 900 crores was spent while building storm water drains, widening roads, a pedestrian plaza and a multi-level parking complex. In spite of all the modernisation, T. Nagar could not escape the wrath of this year’s rains. Here, too, the blame game continued as Stalin accused incomplete work presided over by the former minister S.P. Velumani, now facing an array of corruption charges. With at least half-a-dozen star hotels surrounded by flood waters, T. Nagar hardly lived up to its image of being part of a smart city. Then came the stunning revelation—the reason for flooding of T. Nagar was the dumping of debris generated by the smart city project in a drainage canal running through the area.

One constant image of the 2015 floods was the omnipresence of volunteers rescuing people and animals, supplying food packets and organising medicines for the flood-hit. This do-good feeling was so infectious that even Ola started free boat services by roping in a few fishermen. The volunteer brigade led by many film celebrities, and leveraging social media, stressed the importance of citizen-driven initiatives at times of crisis. However, this time these volunteers were conspicuous by their absence. Not that they were unwilling to step in and help, but were quietly told to play down their roles and leave it to the authorities to handle relief measures.  Since the presence of an army of volunteers would highlight the deficiency of the government, the officials silently ticked off voluntary agencies and many youth organisations when they stepped forward. After an outpouring of protests over social media the authorities asked volunteers to deliver the material they wanted to distribute to the government-controlled relief in Nehru Stadium. But what worked in 2015 was the decentralised approach as local groups had a better reading of what was required by an affected colony.

(This appeared in the print edition as "Chennai Diary")

G.C. Shekhar is a journalist