In matters of politics and election, emotions override pragmatism. And an Indian election is the biggest show of them all—the grandest platform on which political leaders of all ideologies woo their voters. 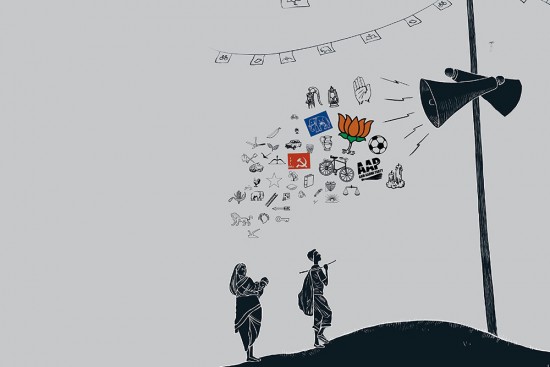 The images play on a loop on primetime television. And on social media. Images of Yogi Adityanath sharing food with a Dalit family. Or Priyanka Gandhi sweeping the floor with a broom. Images that are rich in symbolism. Images meant to tug at the heartstrings. Politics is all about symbols and symbolic gestures. It’s also about optics. About passionate speeches and stirring slogans. And an Indian election is the biggest show of them all—the grandest platform on which political leaders of all ideologies woo their voters. When emotions run high. The heart holds sway over the head. And the senses are overwhelmed by the bombardment of colours, banners, slogans, songs, symbols…

The emotional attachment of people to a party or an ideology goes beyond the obvious—the sights and sounds of an election. Every time Vishnu Gupta recalls his involvement with the Ram Janmabhoomi movement as a kid, it gives him goosebumps. Now 38 years old, the Hind­utva foot-soldier is also the president of Hindu Sena, a quasi-militant organisation that professes to work for protecting Hinduism. “I would have been around ten years of age when Lal Krishna Advani led the rath yatra to demolish the Babri Masjid and start construction of the Ram temple in Ayodhya,” Gupta tells Outlook. “I do not rem­ember clearly what the imm­ediate motivation was, but I can recount that we considered our country as that of Ram bhakts…,” he adds.

Over the next two decades, the Bharatiya Janata Party (BJP) reaped rich political dividends out of this emotional investment by people like Gupta in the cause of the Ram temple and Hinduism. So much so that for people like Gupta, other pressing issues like growing unemployment or price rise hardly matter in the grand scheme of things. “For me and crores of Hindus like me, the primary issue has always been Hindutva…around assertion of religious and cultural identity in order to turn India into a Hindu Rashtra,” Gupta adds. For the BJP, turning the collective emotions of millions of Hindus into a solid vote bank around the Ram temple helped it create its own political legacy.

According to Abhay Dubey, a political analyst at Ambedkar University, every democracy has a majoritarian impulse and it is not confined to India alone. These impulses are weaved around historical injustices, cultural and religious symbols. This is where emotions play a big role in shaping a nation. “There is a majoritarian impulse in every democracy. This majority believes that the country belongs to them as they form the majority. In India, it is Hindus; it could be whites somewhere else,” Dubey says. “Within India, there are states like Kashmir, Punjab, and parts of the Northeast where Muslims, Sikhs, Christians lay claim to being a majority. However, their claim is suppressed by a bigger majority at the national level…There are political parties and leaders who want to reap benefits out of this majoritarian impulse. So, they knit emotive slogans, speeches and propaganda materials to arouse public emotions for political mobilisation, and that is what happened during the Ram Janm­abhoomi movement,” Dubey tells Outlook.

However, experts believe that the politics of emotions, based on the premise of evoking symbols, signs and optics, are not a new phenomenon or are confined to the politics of Hindutva alone. Across the spectrum, political leaders and organisations in India have always relied on feelings to strike a chord with their audience. The difference, though, is between negative and positive emotions.  “Emotions play a crucial role in electoral mobilisation,” says Max Kramer, a media anthropologist working on political emotions and digital communications in India at the Freie Universitat, Berlin. “They do this in ways that are way more complex than the usual focus on political rhetoric would suggest. On the one hand, there is an infrastructure in which emotions can be turned into money. But, on the other hand, there are cultural ways of positioning some actors as more and others as less legitimate when they act politically in a highly expressive manner,” he adds. He also points out that what can become an “issue of moral outrage” depends on history and “power asymmetries between class, caste, gender, and rel­igious identities”.

In recent times, political outfits like Congress and its leaders—Rahul and Priyanka Gandhi—have also tried to evoke emotions and connect with people from specific communities through optics. Be it Rahul Gandhi eating at a Dalit’s house in Varanasi, visiting the Hathras gang-rape victim’s family or more recently, Priyanka Gandhi trying to reach Lakhimpur Kheri after farmers were moved down by a vehicle belonging to the son of a BJP leader. Videos of the Gandhi siblings confronting the police and being mishandled by cops went viral on social media. 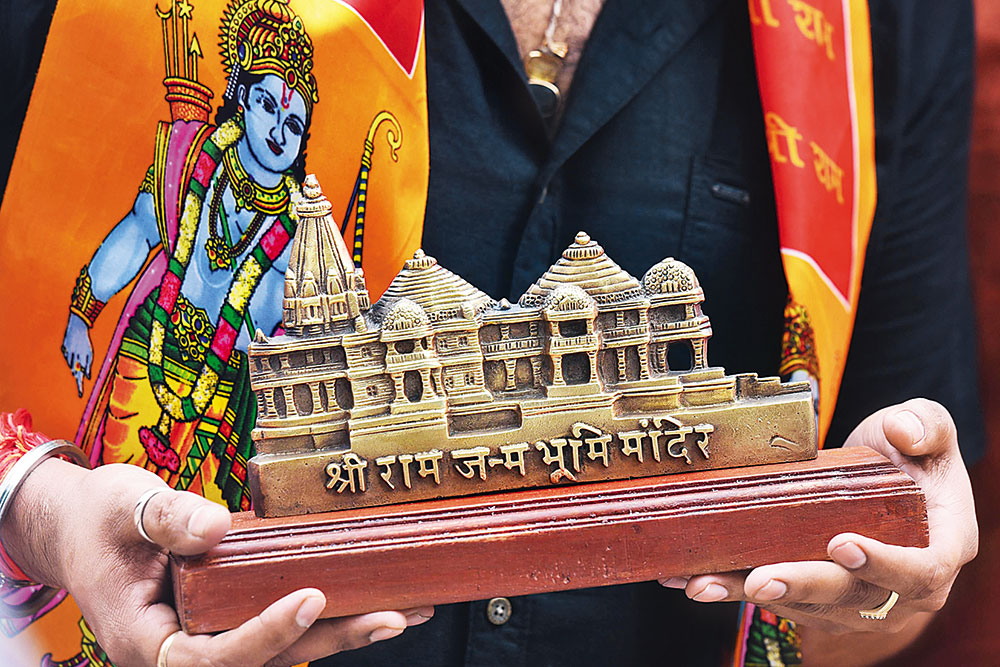 God’s own country A man holds a model of the Ram Temple.

Badri Narayan, professor and director at the G.B. Pant Social Science Institute, Allahabad, and close observer of politics, however, believes that the Congress has failed to connect emotionally with marginalised communities. “The Congress of today has not been able to connect with the people from weaker sections. Rahul and Priyanka Gandhi have been trying to do this through political optics...I think, the grand old party after Indira Gandhi has not been able to build a connection with the masses, the way Indira Gandhi drew an emotional chord with people with slogans like Garibi Hatao for the 1971 polls or her visit to Melchi village in Bihar after Harijans were savagely murdered by upper caste landowners.”

Narayan thinks that the “declining strength of its cadre” is one the reasons for the Congress’ dec­lining fortunes. “You can circulate videos on soc­ial media, but you can’t replace it with cadres on the ground. The ruling BJP might be powerful on social media platforms, but they also have a huge, active cadre base on the ground too, and that changes the whole game,” Narayan adds.

An Indian election is the biggest show of them all—the grandest platform on which political leaders of all ideologies woo their voters.

A section of political experts differentiates bet­ween the politics of emotions played out by right-wing outfits and avowedly secular political organisations or movements. They believe that while the right-wing evokes anger and insecurity to mobilise people, the ‘secular’ outfits are more inclusive in their approach but often fail to sustain their messaging. “The BJP/Sangh Parivar draws on a long history of charged symbolism to create fear and disgust (ghrina) of Muslims to mobilise a Hindu identity in opposition. However, their messaging is disciplined, consistent, and relentless. The only ideologically and affectively consistent messaging against the Hindutva politics of hatred, in my opinion, has come from social movements like the anti-CAA protests, which constantly epitomised mohabbat (love) and inclusivity in both discourse and practice,” says Anand Vivek Taneja, assistant professor of anthropology at Vanderbilt University. “What opposition political parties are doing, by contrast, seems to me—like Rahul Gandhi’s hugging PM Modi back in 2018—is personality and event-driven, and not a consistent and sustained emotion.”

In the eight years since BJP formed the government at the Centre under Prime Minister Narendra Modi, and more so with the rise of All India Majlis-e-Ittehadul Muslimeen (AIMIM) and its leader Asaduddin Owaisi, Muslim politics has been sailing in a new direction too. Articulate and expressive—at times, even provocative—Owaisi plays the emotion card very well to keep his flock together. Owaisi, dressed in a sherwani and skull cap, very often uses expressive content in his speeches in Parliament and political rallies. Almost filmy slogans, like Dekho dekho sher aaya sher aaya (Look, look who has come, the tiger has come), have made him a darling of a large section of the community. And the fact that he can articulate the socio-eco and political marginalisation of the community and blame both secular and communal parties for this, and then use religious texts to ask Muslims to be united and use Urdu as a medium to communicate, all of these go down well emotionally with Muslim masses, especially the youth.

Despite being called a Muslim version of RSS and the B team of BJP by his critics, Owaisi has spread his wings into Muslim-dominated areas in Bihar, Maharashtra, Gujarat and elsewhere.  Zahid Ali, a young AIMIM supporter from Sambhal in UP, tells Outlook, “I like that the Owaisi dares to speak in the face of power, both inside and outside Parliament with his Muslim identity in place, makes people like us love him.” Researchers like Max Kramer believe that the exp­ressive content in Owaisi’s politics resonates well with the Muslim masses, and that’s one reason he has been able to move out of Hyderabad. However, Kramer also draws a line of distinction between the passionate politics of the majority and minority community.

“Indian Muslims often have difficulty voicing negative emotions such as anger, frustration and more complex ones such as resentment. This is because it is often captured in moral outrage, appropriated by the current political dispensation. There are also stereotypes about Muslims being somewhat more jazbati (impulsive) than other cultural identities in India. It can also involve strategies to avoid media visibility at all,” Kramer adds.

(This appeared in the print edition as "Politics of Emotions")