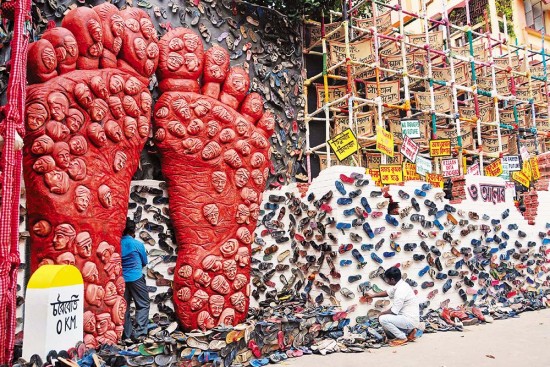 Standing against a bright red backdrop, the Goddess looks straight into the eyes of the visitors. She has no weapons in her ten hands. She is not killing Mahishasur with her trident; in fact, there is no Mahishasur at all! Instead, she is using two hands to cook, and two others to serve cooked rice, and holding plates of cooked food in six other hands. In two other rooms, Ganesh is working on his laptop and Kartik is idly sitting on a chair.

The sight of this Durga idol in the pandal of Maitri Sansad in the Baghajatin area of south Calcutta would have surely displeased Bengal BJP leader Dilip Ghosh, recently promoted as a nat­ional vice president of the party. Over the past few years, Ghosh had been strongly criticising the trend of disarming the goddess by community puja organisers and attributed it to a “conspiracy” to erase from memories of Hindus the glorious history of battles. He also suggested that Bengal needed re-popularisation of shashtra pujan, or weapon worship, on the occasion of Durga puja.

But all his objections seem to have fallen on deaf years, as community puja organisers continue to breach the boundaries of religious puritanism and embrace liberal views, using the biggest annual festival of the Bengali Hindus as also an occasion to celebrate artistic creativity and innovation—in the design of the idols, the pandals and the illumination.

For example, Maitri Sansad, whose puja is into its 71st year, has taken to ‘themed puja’—departing from its sanatani, or traditional puja, for the first time. The theme is how the pandemic left people locked up, while animals roamed free. No wonder, it is drawing crowds. “She is Annapurna. The pandemic has left many people hungry. The mother is feeding her children,” says Shaktipada Sharmacharya, one of the puja organisers.

There were many other idols with no weapons in the goddess’s hands. Take the puja of Lalbagan Sarbojonin at the Maniktala area in north Calcutta. In its 74th year, without weapons and Mahishasur, the idol protects a pair of red lungs with her two hands, while her children look at her from open windows behind.

According to writer and film and literature critic Sanjoy Mukhopadhyay, a former professor at Jadavpur University in Calcutta, the Bengali psyche has accepted many images of Durga—as a caring mother, as a daughter with her children, and as a destroyer of evils, but the most dominant of them all is that of the daughter to poor parents who returns home every year for five days. 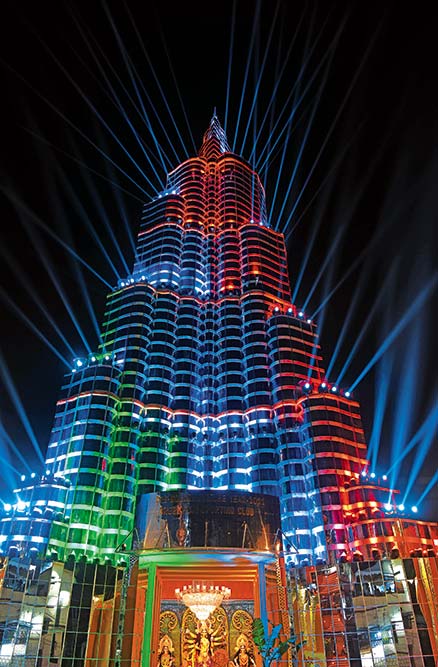 A replica of Burj Khalifa at the Sribhumi Sporting Club

“You can’t ask Bengalis to accept any particular image,” he tells Outlook, adding, “More than a pur­itan religious event, it’s a national festival. Take the case of Michael Madhusudan Dutt, who had become a Christian, had strong dislike for Bengali Hindu festivals and even hated to converse in Bengali. He used Bengali only for literary purposes. But while writing the final two lines of the epic Meghnad Badh, he compared Lanka’s nat­ional mourning with that of the bisorjon of Durga. What’s more painful for parents than the daughter’s return to her in-laws’ place, especially in those days without easy transport and phones?” He points out that even leftist artists, such as thespian Bijan Bhattacharya and filmmaker Ritwik Ghatak had portrayed Durga’s motherly image in their art.

The overwhelming presence of the daughter’s image is also evident from social media posts. “The daughter is all dressed up!” Mainak Pal, a doctor and one of the organisers of the oldest community puja in the Bhatpara area of North 24-Parganas district, wrote on Facebook while sharing a photo of their idol ahead of the bodhon.

Bengalis have accepted many images of goddess Durga—as a caring mother, as a daughter with her hildren, and as a destroyer of evils.

Beyond this sense of the Devi as a member of the family coming home, Durga puja is about the celebration of life in many ways—it’s that time of the year when literary houses publish special iss­ues, including novels, poems, stories; music alb­ums are released; cultural events, including performance of music, dance and theatre are held across the state, and many of those engaged in visual art, painters and sculptors, get busy in des­igning and executing themes and idols.

Themed puja started gaining popularity in the early 1990s, with uniquely designed idols and pandals, imitating scenes like the sinking Titanic in the year the Hollywood film of the same name bec­ame a superhit in India, or that of a derailed train, drawing thousands of people from far and wide. Gradually, it became a domain of trained, professional artists and themed pujas spread all over Calcutta and Bengal.

In the recent years, pandals are being conceived as pieces of installation art—complete with decoration, models, lighting and theme music. In rec­ent years, even top-rung Bengali singer-musicians like Kabir Suman have composed theme music for puja pandals. As the puja took the shape of a carnival, the celebration has also extended from being a five-day festival to one stretching beyond a week. 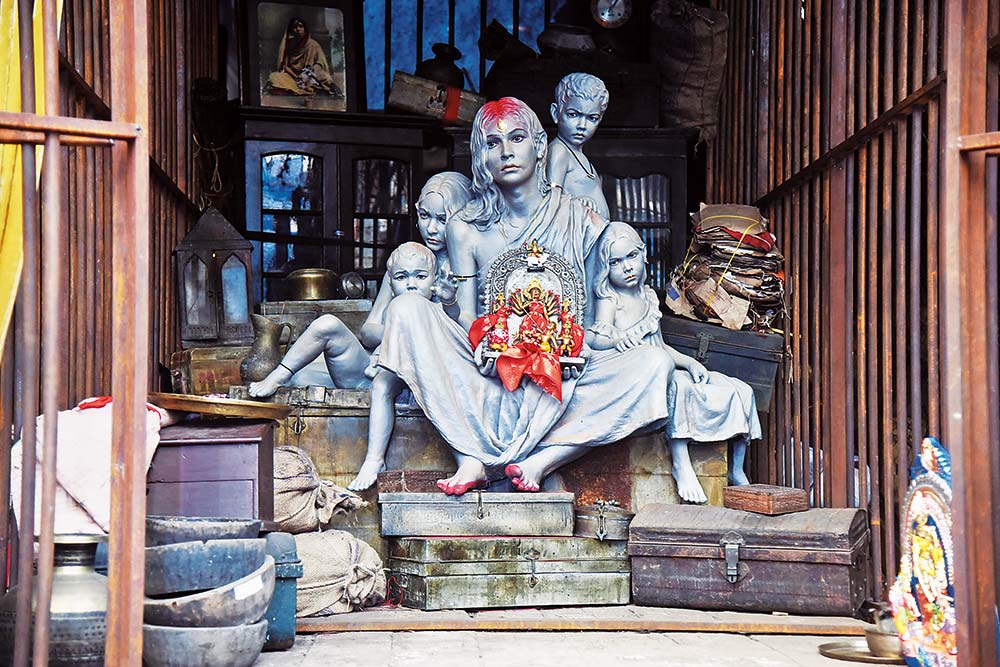 At the Barisha Club, Durga as a woman lodged in a detention centre

This year,  it was the night of choturthi on October 9, two days before the five-day festivity of Durga puja was to formally begin with the bodhon of Durga and her children on Mahashasthi, that hundreds of people stood mesmerised, some of them with hands folded, in front of the pandal of Sribhumi Sporting Club in eastern Calcutta, appreciating the glittering imitation of the Burj Khalifa that will house the idol of Durga and her children till Bijoya Doshomi.  As the puja inched forth, it became clear that the imitation of the fam­ous Dubai skyscraper had become one of the biggest hits in Bengal’s Durga Puja 2021, drawing thousands of visitors.

Themes are also used to deliver social and political messages—highlighting issues like climate change, global warming, female foeticide, hunger and women’s empowerment. Among the biggest hits this year is another puja politically themed. The puja of Barisha Club in southwestern Calcutta has a woman lodged in a detention centre holding a miniature idol of Durga in her hands with her sons and two daughters next to her. The woman in the detention camp understandably represents Durga, who is here a victim of the controversial exercise to update the National Register of Citizens (NRC) in Assam, which has a large population of Bengali-speakers.

The puja of Bharat Chakra Club at Dumdum in the northern suburbs of Calcutta makes for ano­ther example of how the sentiments of the BJP’s leaders are not shared by pandal-hopping Bengali Hindus. Despite Bengal BJP’s new poster boy, the leader of the Opposition in the state assembly Suvendu Adhikari’s allegation that the organisers hurt Hindu sentiments by using shoes as part of pandal decoration and his demands for dismantling of the pandal, there was no public outrage. Instead, it is one of the biggest hits of Durga Puja 2021, drawing thousands of visitors.

Themed on the ongoing farmers’ protests, the Puja pandal is decorated with political graffiti in support of the struggle against farm laws, installation of huge feet with dozens of faces imprinted on the sole, a graffiti showing a car running over farmers, and a large screen even plays the video clip showing a car running over farmers in Lakhimpur Kheri in Uttar Pradesh. The Vishwa Hindu Parishad had announced a proposed protest outside the pandals, but going by the crowds it drew, their call for protest did not resonate with the revellers and the faithful.

(This appeared in the print edition as "FEAT Of Clay")