Fines For Traffic Violations Shift To Top Gear But Where Are The Road Safety Reforms?

Not just bad driving but road designs, pot holes and a contentious Motor Vehicles Act make India among the top rankers in road deaths. Experts say India should adopt the UN Global Plan to reduce road accidents and fatalities by 50 per cent by 2020 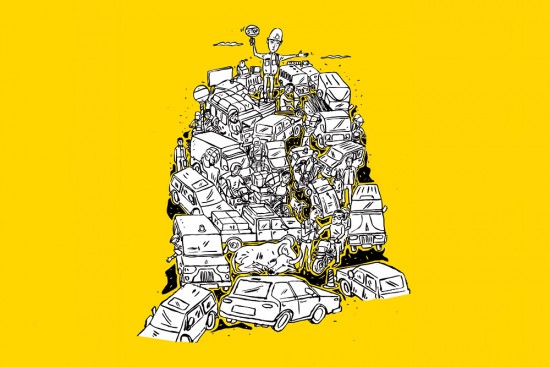 Ever been stuck in a traffic jam on a long flyover? It can be one of the most heartless, lonely and despairing aspects of urban living. Lifted above the human concourse down below—in a flat, treeless ribbon of asphalt—you have nothing but stilled battalions of fuming, grinding metal ahead of you. It’s also a most ironical thing: why should movement halt at all on an elevated road built especially so that we can glide seamlessly? Next, imagine the jam easing. You step on the gas to make up for lost time, to reach that 12.30 meeting, on the empty stretch afterward…and suddenly there looms into view the dreaded white-and-blue posse! For a lot of India, they always shared some traits with highway robbers. And now, a challan can mean the better part of your month’s salary. No wonder a drunken sod in Delhi preferred to set his mobike on fire rather than pay Rs 25,000.

Traffic, like the truth, involves us all. We experience it as a quotidian, everyday activity. But roads and mobility are much more than that. They’re intimately connected to growth. It’s the very blood of our economic life that courses through those arterial roads. Traffic reform, therefore, is a vital need: not the least because an estimated Rs 60,000 crore is lost annually in just Delhi in terms of fuel wasted in congested traffic and sundry other ways, an IIT study revealed in 2017. Imagine a national figure, tossing in ‘traffic capital’ Bangalore, the north-south tunnel mess of Bombay, and everything else.